A great answer for the lack of good 2005 RPGs

Following the example set by the ./hack series, Digital Devil Saga is split up into two games but in actuality is one. Digital Devil Saga I was released earlier this year and just recently did the sequel arrive. Instead of reviewing the two games separately, we've decided to combine the reviews since the gameplay mechanics are virtually the same. The overall story definitely has a feel of two separate chapters and that's how the two games are divided up. It's a very compelling story with quite a twist that actually isn't predictable or cliche.

DDS also features a great combat system that distinguishes itself separate from your standard turn-based RPG's. All of these pieces of the puzzle come together to form one of the best RPG's this year.

DDS is actually just one of the many games from the Shin Megami Tensei series that dates back to the SNES. The series has always been about the relationship of humans and demons. In DDS's case, the world known as The Junkyard contains many different tribes that are competing to reach the ultimate goal: nirvana. Nirvana may only be reached by climbing the Karma Temple located in the middle of the world. So the background of the story is about battles and wars fought between these tribes in order to reach this sacred Temple. 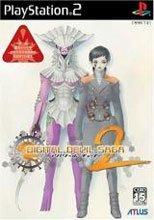 Your adventure will focus around the Embyron tribe; more specifically, you'll be in control of Serph, one of the important tribe members. The world of The Junkyard is much like the name describes. The landscape is nothing but a barren wasteland where it appears the world is in a post-nuclear world war. Scraps and gigantic pieces of metal are scattered everywhere.

Only around the Karma Temple are we able to observe the technologies of this highly advanced world. It's an ugly world but beautiful in its execution because this feeling of emptiness across the land is intended. There are also hundred of artifacts, statues, and tribal graffiti littered all over the place giving the land a sort of 'sacred' touch.

You'll encounter a sleuth of different characters, all of which are highly stylized to fit this barren world. You can tell that each character has to survive on their own will and that's the overall feeling as far as the social encounters go. The main niche behind DDS is how humans may shapeshift into a demonic form where their powers become very powerful. These demonic powers are known as mantra and you'll be able to fully customize how each of your characters progress and level with their mantra.

Unlike other RPG's, some characters or specific character classes may only learn certain spells and abilities. DDS is different from this because any character can learn any mantra, or abilities. This lets you have full control of how your party works and how each character plays out. It's a great feature because of its open endedness. It also gives some incentive to replay the game since you can basically play it in a totally different way. Of course you'll deal with the same story but for those who import their characters from the first game to the second, there are actually some minor story changes depending on what route you decided to take. Non-linear features such as this make great RPG's.

Mantra is also categorized by the elements such as earth, fire, water, etc. The combat system is very unique in that it is heavily affected by the elements of your spells and abilities. Each enemy, and yourself, has weakness to certain trees of each element. Whenever you or your enemy is hit by this certain element, an extra attack is gained to the attacker. This is very important because you can chain attacks together by using the correct ones. In theory, if the correct attacks are used, your enemy will never even get a hit off. However, this works the other way around too so it implements a great deal of strategy.

Critical strikes also grant an extra attack so melee moves can also produce the extra attack. DDS also doesn't present to you or make it obvious as to what weakness each enemy has. You'll have to discover this by experience and toying with your abilities in combat. It's a deep and very challenging battle system that actually makes random fights fun to engage in, and they are beneficial since every time fight you learn something new about your enemy. The best part of the system, as mentioned above, can go against you as well. This makes you keep your guard up and stay alert as some battles that should be cake, can turn into a party wipe.

We've already described how the world looks and how each character has a rugged, lone-wolf appeal. The artistic values are definitely apparent but that doesn't necessarily mean the graphics are great. As much as I loved the art direction of the overworld and certain other areas you explore, the technicalities of the visuals is under par. The overall look is a bit blurry and faded, and it lacks a certain sharpness that we've grown so accustomed to as far as this-gen graphics go. The cutscenes provided are entertaining to watch to say the least bit.

Voice work is included for some parts of the game, but through most of it you'll be reading text. As far as the sound department I was very impressed. DDS uses a variety of different styles for the music. The combat scenes use a great electrical rock beat whereas certain dramatic scenes will fill with a movie like score. There's even some J-pop to be found. I will admit that the music overpowers the sound effects, as there's nothing impressive. Sounds are a bit bland and didn't have an impact on how I enjoyed the game. It does its job though and does falter the gameplay in any way.

I must say that 2005 has been a lackluster year for RPG's on consoles. We were lucky enough to get our hands on these two games and amazingly enough enjoyed the hell out of them. If you are as lucky as us and get to experience DDSI, I guarantee you'll be hungry for the sequel because of how the game ends with a great cliffhanger. Like I said, the games are identical as far as mechanics, although a couple things were noticed in the sequel. First is that mantra is learned differently but still fully customizable. Instead a grid is now used and whatever path you choose on the grid affects what spells you'll be able to learn. It's nothing drastically different, just a different way to visualize it. One major problem I felt that plagued the second game was how numerous the battles were. Sometimes when exploring a dungeon or just about anywhere, the random battles pop up without you even taking a couple steps. And this actually does make some parts of the game tedious and almost annoying to progress through.

DDS is thoroughly enjoyable and anyone who is looking to get that RPG fix that has been missing this year should definitely not pass on this. The concept of dividing the game up into two parts is also something I enjoyed and since you can import your characters into the second game from the first, the connection between the your experience with the first game and the second are linked together turning out one gigantic experience. Each game is roughly around 30-40 hours long. So even though things can get a bit tedious at times, the unique combat system saves the day for DDS as you can't find anything like it elsewhere. It easily fights for the best RPG of this year.