At least it's better than: Viewtiful Joe Red Hot Rumble

The original Viewtiful Joe for the Gamecube was well-received by the gaming community for bringing back some old-school 2D sidescrolling gameplay. On top of some cool special moves and solid gameplay, it featured a striking and unique art style. Unfortunately, the DS version really doesn't bring much new to the table, and the touchscreen utilization could have used quite a bit of work (or a total omission).

Things start out pretty slow, forcing you to menially slide film stock in order to advance the opening cutscene. This is a good example of Capcom trying to hard to use the touchscreen. I really don't need to move my finger across the screen to see more of the scene:.pressing A would certainly suffice. I don't think DS owners are that desperate to use the touchscreen. Besides, the cutscenes and story really aren't even that interesting to begin with. When the story starts, Joe is in the real world, negating any 'movie powers' he has obtained throughout the series. For some reason, a 'V-Camera' is introduced that somehow grants him these abilities again. Of course, this means plenty of kicking the living crap out of weird robots and dinosaurs in slow-motion again.

Combat is virtually identical to previous entries in the series. Enemies can be dealt with using basic punches and kicks, or you can get fancy by doing things such as punching bullets back at them. Abilities and special moves are obtained in two different ways: some are automatic story elements, and others are purchased between levels. For example, while you may receive your slow-mo attacks for free, you'll have to pay for the Red Hot Kick. 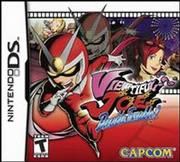 Several new special moves have been introduced that involve the DS touchscreen, and none of them are particularly exciting. One combat-based special move is called Scratch, and is performed by pressing R and then scratching the screen. Unfortunately, this is harder than it sounds, and really interrupts the flow of the action. I usually found myself using the Slow-Mo attack rather than bother with pulling out the stylus and fiddling with the bottom screen.

Some of the touchscreen elements are based more on puzzles than fighting. For example, you can split the screen horizontally and move background elements in order to solve certain puzzles. Let's say there is a fire that needs to be put out, and a fire hydrant a few feet away. Joe can split the screen and move the hydrant towards the fire to extinguish it. It's a nice idea, but again, fiddling with the touchscreen really messes up the flow of the game. The top screen is a close-up view of the action, while the bottom more closely resembles the view from the console game. The two screens can be switched, giving Joe closer access to keypads and other small background elements.

The art style hasn't been hurt in the move to the DS, but some technical issues with the graphics have. Everything looks far more pixelated, especially explosions (which would have looked bad on the N64). Music sounds just as good as it did on the consoles, and everything sounds great coming out of the DS speakers. Sound effects are full of cheesy one-liners, but they're appropriate for the mood of the game.

If you're a huge fan of Viewtiful Joe, it might be worth checking this out so you can play on the go. Unfortunately, this is a series that seems to be taking steps backwards more often than not. It introduces very little, and what is truly new (the touchscreen elements) falters and complicates the control.