Like a fine wine: This series just gets better with time

How does one begin to present, grade and critique a sequel to one of the greatest strategy game series ever, produced by one of the greatest game designers ever? Sid Meier, an industry veteran of over twenty years, has created some of the most memorable PC titles of all time. He was the second inductee into the Hall of Fame of the Academy of Interactive Arts & Sciences, the Grammys of the game business, only behind the legendary Shigeru Miyamoto of Nintendo. He was also just recently inducted into the "Walk of Games" with a Lifetime Achievement award, again just behind Miyamoto & Nolan Bushnell, well known as the "Father of Video Games." While primarily known for his strategy games, Meier's legacy includes dozens of hit titles such as F-15 Strike Eagle (first combat flight simulator ever), Pirates!, Railroad Tycoon, Alpha Centauri, Colonization and more. Now, 14 years after Sid first unleashed the original Civilization upon the world, his latest Civ has arrived on my desk. 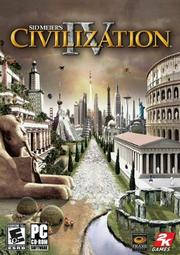 Sid Meier's Civilization hit the scene back in 1991 and made waves in the strategy gaming world with beautiful graphics (for a strategy title) and deep, non-linear gameplay. Civilization II, or Civ II as fans tend to shorten the title of all the games in the series, retained what made the original great and added an isometric graphical view, improved diplomacy, scalable damage in warfare and expanded unit types. Civ III refined the Civ II experience greatly, while adding a long sought system of establishing national borders, a cultural factor for improving cities and much improved opponent A.I.. Now with the fourth entry in this venerable series in hand, I am pleased to report that fans have every reason to rejoice.

The basic premise of all of the Civilization games has always been and continues to remain the same, to "build a civilization to stand the test of time." The game begins with the player choosing the type of earth that they want to start with in terms of etc. The next step is choosing which nation and leader you will play as, all of which vary greatly in terms of how your Civilization will operate. You begin the game with the usual settler and worker unit, one to found your first city once you've found a good spot and the other to build roads, mines, cottages, farms, etc. As time progresses, you build military units to attack your enemies or defend your cities, you secure resources to make your people happy, or to barter with your friends, you research new technologies to advance your cities, your military and your cultural value. All of this is relatively consistent with the previous games and will be nothing new to those of you who have played before.

Civilization IV is not simply a new and improved version of the previous game; it's really a complete re-invention of the series. Nearly every aspect of the game has been picked apart, tinkered with and put back together in a way that works very well. For starters, Civ IV now sports a completely new, fully 3D rendered graphics system. The level of detail and animations are as impressive as they are easy on the eyes, especially for a turn based strategy game. The new user interface effectively displays important information in a way that is quick and nag-free. Sure this is all just the "cover of the book" so to speak, but it sure is pretty.

The happiness system has finally been retooled to drastically reduce the effects of disgruntled citizens in a way that actually makes sense. Rather than a whole city going into civil disorder and shutting down (effectively turning a city from on to off) when workers become unhappy, the individual workers can simply stop working. That is to say that the level of "disorder" is now proportional to the number of citizens who are actually unhappy. In this way, a city with poor happiness or cultural ratings will find that a large percentage of it's work force is not producing anything, but at least it is not shutting down, burning buildings or randomly joining the enemy. Working to make your cities as happy as possible, rather than trying to keep them just happy enough for them to not riot, is now well rewarded, which quite frankly makes a lot more sense.

Government types now operate in a much more interchangeable fashion, allowing you to pick and choose various elements of political, social and economic policies so that you may fully customize how your government will work. These individual policies are known as "civics" and allow for a much greater degree of flexibility and is greatly appreciated. Now you can be a very scientific and spiritual nation that loves bureaucracy! Or a freedom loving, militaristic nation that is environmentally friendly! The possibilities are endless.

The health of your citizens is now a factor as well as increased population and pollution in a city will drop its health levels. This will in turn force your citizens to demand and consume more food. The more food they use, the slower the city grows. If they use too much, many will starve. Certain city improvements like hospitals can also help.

Combat and military units have also undergone a transformation. First, units are now rated in terms of a combined "strength" score rather than having a separate offensive and defensive ranking. Secondly, taking a cue from role playing games, your units may now upgrade and improve themselves as they gain experience, whether gained from battle or training. For example, winning a battle or multiple battles could allow you to increase its overall strength by 10%, increase its attack strength against a certain unit style, give it additional defense bonuses on certain terrain types, allow it to perform wide area attacks that damage multiple units, etc. A unit that has won many victories and received extra training could be vastly superior to the same type of unit fresh out of production.

This has a major effect on gameplay as it tends to lead to a much more defensively oriented style of play. Imagine you are attacking a city and you lose the first battle. Some of the units in the city will invariably gain experience and upgrade themselves. So that same city could conceivably become even stronger after your attack than it was before the battle began. This forces you to think differently, to diversify your military with different unit types. Ships or Artillery to weaken their defenses, planes to weaken their strength or destroy their resources and finally mobile firepower to actually engage them in combat. Again, this system actually makes sense when compared to previous Civilizations.

Another major addition is the introduction of "religion." Sid Meier always avoided this issue for an array of good reasons (mostly to avoid controversy), but finally decided to give it a try this time around. To avoid any problems, the design team made all the different faiths completely equal within the game. Religion in your civilization can have a great many benefits to your populace. Cities that follow a faith or multiple faiths can gain financial, scientific and happiness bonuses depending on what your civic types are set to. If you found a new religion by developing the required technology for its creation, your civ will gain additional bonuses, especially when you spread that new faith to your neighbors. Be warned however, other nations will perceive you negatively if you do not follow their particular faith, claiming that you have fallen under the sway of a "heathen religion."

Nearly all of these new gameplay elements are introduced as the prerequisite technologies are researched and discovered, as would be expected. The technology system (Tech Tree) has also been tweaked to allow multiple paths of research when developing new tech. This speeds up the game a bit and allows for a more personalized approach to research.

Lastly, the computer player's A.I. has seen its usual upgrade and now can play through the game much more effectively than in the previous editions. It would be nice if the computer opponents were able to orchestrate long term, well planned wars, and not just individual battles, but they get the job done alright. The bottom line however, is that you won't be disappointed with the degree of difficulty that your opponents will present you with when you face them.

Other elements worth noting:

-Multiple ways to win; conquer the whole planet, be the first to win the space race, be elected as the leader of the world, culturally dominate your opponents, etc.

-Wonder Movies from Civilization II are back! (excited aren't you?)

-All multiplayer options from "Play the World" are back in full form.

-Leonard Nimoy himself performs all of the games voiceover work!

It should be noted that there have been a relatively large number of reports of users experiencing compatibility problems, even when their systems seemingly meet or exceed all of the game's system requirements. ATI Graphics card owners seem to be particularly effected, though a wide array of graphics related problems have been reported with other chipsets as well. This is no doubt due to some programming glitches that will, no doubt, be fixed in subsequent patches as they become available. Firaxis has acknowledged the problems and as of this writing, have completed an update that is awaiting quality assurance testing over at 2K Games before being released.

While the game is not perfect there is really nothing negative to say about it, or at least nothing worth mentioning. You will spend hours upon hours playing through this game and still not be able to discover all that it has to offer. The incredibly addictive nature of all the Civilization titles (check out www.civanon.org) remains true here, as we always want to play "just one more turn" before bed, or work, or meal time, etc. I was concerned, to say the least, when I learned of Sid's desire to re-invent the franchise. After all, "If it ain't broke, don't fix it" right? Well, Civilization may not have been broken prior to Civ IV but I sure can't complain about how they went about fixing it. There is a reason why Sid Meier likes to attach his name to his products in such a bold way and by now we should all know why. Truly, "Sid Meier's Civilization IV" is yet another masterpiece that will stand the test of time.