Review: Theater does a beautiful job

Casting, set stellar in 'Beauty and the Beast'

For a musical about the triumph of inner beauty over outward appearances, the stage version of "Disney's Beauty and the Beast" sure has a lot of neat things to look at.

The production that opened Friday at the Lawrence Community Theatre, 1501 N.H., has elaborate costumes, strobe lights, a disco ball, glowing roses and human-sized champagne bottles that explode with streamers.

But this show doesn't get by on gadgetry. Solid performances from local actors make it enchanting and funny for children and adults alike.

The "tale as old as time," as the title song describes it, tells the story of a prince whose vanity leads him to be turned into a grotesque beast. The beast needs to find a woman to love - and to love him - to reverse the spell. His castle's servants, who are gradually turning into household items such as a clock and teapot, are plotting to make Belle, a quirky girl who lives in a nearby town, fall in love with the beast. 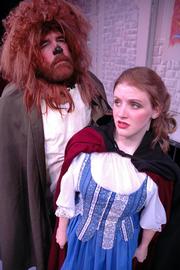 Knute Pintenger as the Beast and Kendra Verhage as Belle rehearse a scene from Theatre Lawrence's production of "Beauty and the Beast" in 2005.

Kendra Verhage proved a complete package as Belle, with both a beautiful singing voice and strong acting skills. She seemed to have chemistry with everyone on stage - especially Knute Pittenger, whose booming voice made him an intense beast.

Two of the household "gadget" characters turned in impressive performances as well. John Phythyon was stellar as Lumiere, the French-accent-wielding candelabra. And Annette Cook used her crisp voice to deliver the well-known title song.

The costumes for the musical, which were designed by Cook, helped make the show a lot of fun. Lumiere's hands lit up, Cogsworth (the clock) had a moving pendulum, and Chip (the mug) was rolled on stage inside a table, with only his face showing.

Most of the weak points of the show were ones you might expect to see on opening night. Some of the lines early on were rushed by the overzealous actors, singers and musicians had a tough time staying together during a pair of scenes, and the actors occasionally looked like they weren't entirely comfortable with large, choreographed scenes.

One weak spot, though, might be chalked up to difficult casting. The part of LeFou, villain Gaston's right-hand man, is played by Case Bruyr. While Bruyr seemed to have an able voice in upper registers, the LeFou part requires someone with a stronger voice in lower registers to carry the song "Gaston." But with so many solo parts in the musical, it might have been a challenge to find the perfect part for all of the volunteer cast.

Though the "Beauty and the Beast" story has been told for centuries in different versions in many countries, the Disney version made popular in a 1991 film certainly is entertaining. But the humor doesn't keep the moral lessons taught in the story - that inner beauty is more important than outward appearance, that first impressions can be deceiving, and that people can change - from shining through.

Both the entertainment and the lessons translate well from the big screen to the Lawrence Community Theatre's small stage.