A decent first effort for the Tony Hawk-only developer

Does it feel "next-gen": Not at all

Being a big fan of Clint Eastwood spaghetti westerns and the HBO show Deadwood, I've always wanted a game to bring the Old West experience to life. Red Dead Revolver was decent, but failed to deliver on the level I was hoping for. GUN proves to be more entertaining than RDR, yet still manages to fall short of becoming the great videogame Western that we've yet to see.

You play as Colton White, a typical grizzled Western protagonist. Early in the game, you meet your father Ned (voiced by Kris Kristofferson). In this brief tutorial of sorts, you'll become acquainted with the controls by hunting various game. Soon after, your father gets murdered, and Colton's quest for revenge begins. 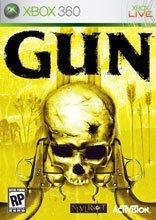 The on-foot shooting in GUN really doesn't introduce much to the typical action game mold. Aiming with the right analog stick is somewhat awkward and slow, even if you increase the sensitivity. This is far worse when you're trying to zoom in and aim with the rifle and bow. For instance, you can't even move the reticule fast enough to keep up with enemies on horseback, which is a major problem at times. The most unique aspect of the shooting in GUN is the QuickDraw ability. By killing enemies, you fill your QuickDraw meter. Hitting RB will zoom in the camera and slow down the action, allowing you to destroy huge groups of enemies. Merely flicking the left stick will aim the reticule at the next enemy, which actually makes certain situations far too easy. It's even possible to shoot various projectiles out of the air with this ability. As you progress, you'll acquire new weapons as well as upgrade your current ones, but the pistol is easily the most useful (especially once you get dual revolvers). In addition to the guns, you can throw whiskey bombs and dynamite with the left trigger.

Variety is GUN's biggest strength, as no two missions are the same. While one may be a typical "defend the bridge" mission, another may feature Colton riding on top of a stagecoach while blasting horseback bandits. In addition to the variety in the story missions, there are tons of sidequests available. You can take down wanted criminals, work as a deputy, mine for gold, work for the Pony Express, and hunt. Most of these activities will increase your stats, which is a necessity for taking down some of the later bosses. If you're one of the types that likes to get 100% on every game, there's a good deal to do here. There's even a Texas Hold-Em tournament that you can partake in, which is a very welcome distraction. When you're done doing sidemissions, you can instantly warp back to the story by using the map screen.

Like Neversoft's other port (THAW), this 360 title wouldn't even look particularly impressive on the PS2 or Xbox. While faces are detailed and the draw distance is decent, it's certainly nothing worthy of the phrase "next-gen." Fire and explosions look especially bland and uninteresting, and character animations are goofy at best. The audio, on the other hand, is top-notch. Voice acting is excellent, and is helped by some Hollywood talent (Thomas Jane, Lance Henriksen, Ron Perlman, Tom Skerritt, and Deadwood's Brad Dourif). GUN's music puts you right into the Western mood, as well. Despite the quality of the music and voice acting, the actual in-game sound effects are completely unimpressive.

While the story is executed very well, there really isn't much of it. The game can be beaten in five hours, which is terrible by any current standards. Sidemissions get old after a while, and only add two or three extra hours at most. GUN is the absolute definition of a "rental" game, albeit an above-average one. Worth a weekend rental, but certainly not a purchase.