Does it feel "next-gen": somewhat

The Xbox 360 version of Most Wanted is identical to the versions on the last generation consoles in almost every way. Therefore, most of the review will be as well.

The Need for Speed series has had its share of ups and downs. Hot Pursuit was a thrill ride that was greatly improved by the addition of police throughout the different game modes. The series then went Underground, literally, and seemed to get bogged down by the customization craze that was occurring in pop culture. Thankfully, Most Wanted brings together the best of both worlds, with customization still an option, but a much smaller part of the gameplay. 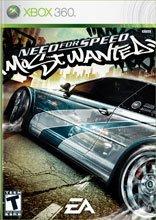 The controls for Most Wanted are spot on. Shifting is so intuitive that as the game progresses, you'll shift without even thinking about it. Handling, of course, is different with each car, but none of them feel like some of the wooden boxes I've driven in other racing games.

The career mode in Most Wanted is more substantial than other racing games, even with a story and dialogue that is laughable. The top local motor head Johnny Razor, who is instantly hate-able not only for his name but also for the incredibly stupid things he says, messes with your car before a heads up race against him. Of course he wins your sweet BMW, and since he's at the top of the Blacklist, a notoriety ranking system for the local street racers, you've got to take down fourteen others before facing him again.

Each of the Blacklist racers has tasks and races that must be beaten before they will race. There are several race types in career mode. The circuit race is a traditional lap-style race with four competitors, and drag is exactly what it sounds like. Lap knockout is a four lap race with the slowest racer knocked out at the end of each lap, and Sprint is simply a race to see how fast you can get from one point to another. Speedtrap is a race with cameras set throughout clocking your speed. The racer with the highest cumulative speed takes the race no matter what place they cross the finish line. Tollbooth is a race with time decreasing as you get to the next tollbooth checkpoint. With all of these different races plus tasks such as evading police in certain times or with certain amounts of damage, the career mode can easily last fifteen hours.

After each Blacklist racer is defeated, two "markers" can be taken from the racer. These markers can be anything from backroom performance parts and rims to the racer's car. Trying for the car is the best idea, because during career mode the cops keep tabs on each car. As the heat builds up on one car, putting it in the garage and taking out a cleaner car can help progression through the story and decrease the chance of having the car taken.

There are also quick race modes. Quick Play automatically chooses the car, the type of race and the track. Custom Race is similar to the Quick Play mode, but you get to choose the car, track and type of race. Split Screen is a standard two player race either as a circuit, a sprint, a drag, or a speedtrap. The last quick race mode is the Challenge Series, which is similar to the Quick Play option, but you as you progress the races become increasingly more difficult.

The graphics are impressive, especially in the higher resolution modes available. Weather effects are phenomenal. Everything is smoother in this version of Most Wanted. The sun is blinding as you exit tunnels and water trails are kicked up during rain storms. The FMV sequences are very stylish, and almost reminiscent of the original arcade version of Area 51. The entire game is very stylized, from the opening screen to the garage where the cars are kept. Presentation is consistent throughout.

The soundtrack is filled with hard rock and rap tunes. While in the garage, and during customization, the same songs seem to be on an endless repeat. Thankfully they take a backseat to the sounds of racing during actual gameplay. The voice acting is alright, but the use of a police scanner enhances the game immensely, allowing you to change your driving habits and your route if necessary.

Even after fifteen hours in the career mode, I still wanted to jump into one more race. The different modes and customization options definitely increase replay value, and racing in Most Wanted is simply fun to do. Xbox Live also increases the already high replay value that the game brings to the table. There are several racing games available at launch, and by no means is Most Wanted the best of them available, but it is a great ride that is worth looking into, especially if previous Need for Speed games have spent significant time in your console.