Does it feel "next-gen": No

For the past couple years EA Sports has been hard at work making the next generation of FIFA games and steadily improving the title on Xbox, PS2 and Gamecube; but all they could produce for the 360 launch was a debacle.

This game has supposedly been in development or two years and at times the visuals seem to reflect this investment. The animations are generally the most fluid in any of the sports titles and the lighting is gorgeous. Also many player models are easily recognizable (if you know the players). These models are enhanced further by the emotion they can show on their faces; many times it is nice to see pain and surprise on a player during the match. Yet to go with these many effects there are major let downs. For starters there is a bizarre outline around all the players when close up. This isn't noticeable during normal play, just during close ups but is still quite annoying. Also the text in the menus is often too small and hard to read if not viewed on an HDTV. Further issues include a strange scaling in the depth-of-field effect that is cool at first and later just gets annoying. 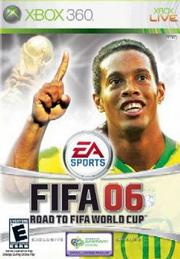 Yet, the graphical issues are the smallest problems; the real issues go much deeper. These issues include poor controls and lack of gameplay options.

First, there is literally only 3 ways to play the game Road to the FIFA World Cup, custom tournaments, and online play. The Road to the FIFA World Cup mode is quite a let down because it is so restrictive. To begin with there are only 72 international teams to choose from and most are from Europe. This at first does not seem too bad, but when it means that the player can only qualify as a European team, then it is an issue. Also, there is no form of team management beyond lineups, there is no recruiting and no roster changes available. To top it off the Road stops after qualifying for the World Cup, so you never get to compete for world supremacy on the pitch. Maybe in a couple weeks EA will release FIFA06: The FIFA World Cup which will take your qualifying save game file and let you play for the cup. The other two gameplay options are just as lame, but do extend the game's life a little. The custom tournaments can be league or knockout and you can choose any teams to participate. This means it can be quite easy to get the Gamerscore points from these events. The online element though is just more of the same, just one more match of Brazil against Brazil but with lag thrown in for extra fun. Oh, there is also the dismal practice field during loading and in menu in which you can practice taking shots against and unguarded goalie while your team mates run the opposite way. Wow, brilliant!

Okay, the game has few ways to play, but it could have really well done controls that make each match exciting; too bad that is not necessarily the case. There are a few nice tweaks to the way the defense closes down on passing lanes and is able to stick an attacker quickly, but that is about it. The offense is too often stymied by poor positioning that is impossible to correct. If these players were to always get caught on the back of the defense, they would not be on the pitch too long. And to compound that issue is the fact you can't push the defender out of the way to receive the ball or push an attacker out of the way to intercept the ball. Why this ability was neglected is a good question. This probably would not happen so often though if EA had left the off-the-ball controls in the game. As it is there is no way to explicitly state what player the pass is for, but instead just to kick the ball in the general direction and hope the intended player receives it. This goes for set plays like corner kicks and direct kicks also, no explicit control possible. Couple that with computer team mates that like to be ball watchers and many times setting up an offense is impossible. Sure team mates can be manually triggered to run, but they don't run intelligently but rather straight forward even if that means off-sides instead of laterally until the kick. Lastly, the trick stick is still useless. EA would be better off just removing the abilities totally and use the right stick for choosing music tracks. The tricks may work once in every 3 games played at best.

There is one aspect though that was well done the audio. This game has so many poor aspects that it is surprising to see such well done audio. The game sports some of the best crowd sounds ever put in a video game. The crowds react to the on-field plays extremely well with swells coming with every step the forward gets towards the goal and, if at home, enormous cheering after every goal. But, if you are getting hammered on the road, expect to hear it from the crowds. There is even a "Go home England" chant that I experienced first hand right before scoring two goals and silencing the crowd for the rest of the game. Also well done are the on-field sounds of players colliding and connecting with the ball, however, the absence of any voices seems a little odd. Though, the two color commentators should be shut off because the commentary is atrocious and there will be repeats within two games. The provided EA Trax is not a total bust surprisingly and would have been a success on the original Xbox, but with the ability to have a custom soundtrack it will probably just be turned off.

So, in recap, the game sports improved visuals, improved animations, handicapped computer players, no lasting off-line play and missing controls. If this game had been just a port of the current generation's FIFA game it would have been exponentially better than what was delivered. Maybe next time EA is called on for major release titles they will not rip out the important parts of their games.