A pretty face with a silly pace

Does it feel "next-gen": Almost

Professional basketball has always been about big name players carrying a team of lesser known players. Long ago this attitude garner a huge fan base because the players were likable personalities and played a team based game, even though they were the stars. Now, however, the game has shifted from a team game to an individual effort and NBA Live 06 represents this fact in more than one way.

EA made a few strange design decisions in the process of completing Live06, the most bizarre being the inclusion of only one season to play. That is all there is to mess with one season to make one of the teams the champion. This decision also removed the need for any managerial aspects and so those too are missing. The only aspect that is like a manager mode is the ability to limitlessly trade players outside of the season and then use that roster during the season simulation. 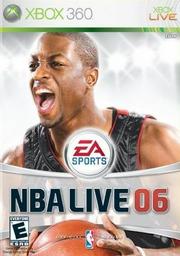 I do not understand how Madden can leave out manager abilities but leave in 30 seasons of play and yet Live06 can not. This decision essentially removes any replay value from the game because one time through a complete season is the same for any team. Before each game you can choose between simulating or playing the game. If you decide to play the game then you can choose the difficulty level, the quarter length, and the jersey to wear. These options are available for every game played including the online matches.

The shining spot of the whole game though is the new practice arena that is available during the menu and loading periods. It is a great way to practice shots and work on the Freestyle moves. The practice arena is exponentially more useful when there are two, three, or even four players practicing together. The biggest issue though is that it can be so fun and absorbing that you won't want it to end, but you are forced to exit when the loading is complete. Why there is no option like in FIFA06 where the player can choose when to enter the game is unknown and sorely missing.

The visuals in Live06 also got similarly strange refocusing. The superstars here are the character models. These models are possibly the best looking on the system. Most of them are photo-realistic which is further enhanced by the sweat that builds up throughout the game. Yet somehow the developers forgot that humans display emotion on their faces. It is quite disturbing to have such amazing models be completely statuesque facially the whole time. If Gooden gets fouled on the way up to the hoop and still makes the shot there is going to be celebration but instead the player is left with nothing.

Also strangely missing are realistic ball animations. Too often it is obvious that the ball never makes contact with the characters. This is displayed in every rebound where the ball seems to teleport from the rim to whichever player was deemed to have gotten the rebound. In addition, the ball has a tendency to bounce in bounds for a while before going out after a rejection or missed shot. One other major visual problem is the camera. It never feels correct in any of the view modes even when the vertical positioning is tweaked. This is a problem because too often it is impossible to see open players or the camera will get stuck on the baseline view and negate any possible play at the top of the arch. It is this kind of carelessness that appears throughout the game.

The trend continues with the controls for Live06 also. It is obvious from the instant the practice arena lights up that the offensive controls and plays were the focus of development. There is a large list of set plays to choose from that can be mapped to the D-pad and used on the fly. This flowing offensive ability makes quick breaks addicting like never before. Also, every shot option in the game from jumper to alley-oop is intuitive and quickly becomes second nature. The only exception to this rule is the free throw which is pretty poorly setup because the only direction the player receives is that the shot uses the right thumb stick. However, what is not mentioned is that the player has to watch the character's animation to time the shot correctly. This proves to be much harder than it should be and hopefully will see some fine tuning in future iterations.

Yet the worst aspect is the defensive control setup. There is very little the player can do on the defense except to call a formation or tactic with the D-pad and hope that the computer will make up for the many mistakes that are bound to happen. The issues with the control are only magnified when playing online because most opponents will have the Freestyle moves down to a science and will fly by you with players like LeBron James and Dwyane Wade. This makes the game more into just a shoot out than a balanced competition, but that is why the practice arena is so much fun because it is only about a half court game of offense.

Lastly, the sound is the supporting cast that fails in almost every regard. The commentary is annoying and will start repeating in only a few matches. The on court sounds are weak with little impact coming from collisions or the ball hitting the court. There are on court voices that the player will be able to hear, but they are not convincing at all. Again somehow EA was able to suck all the emotion out of the basketball players. However, there is one great sound effect that everyone will be hearing often the clank of iron as the shooter bricks a free throw.

At first glance the game seems to have a boat load of promise with the new loading and menu setup and the amazing character models; but it does not pan out that way. In the end there is very little here to play, only a single season, single online matches, and the addicting practice arena. Couple those shortcomings with spotty control and weak sound and there is not much to give the game credit for.

rhymes for the win!