Fun snowboarding if you can get passed the presentation

By by Kevin Augspurger - special to Lawrence.com

Bad: Too many "other" items, many failed attempts at humor, no online multiplayer

Does it feel "next-gen": Yes, because of the draw-distance

Amped 3 is the third entry in the Amped snowboarding series from developer Indie Built, and the first in the series published by 2K Sports. The Amped franchise has always been compared to the more over-the-top antics of EA's SSX series, and has suffered from trying to separate itself from the comparisons and make its own niche in the snowboarding market. With Amped 3 and the Xbox 360, they seem to have finally found it.

One of the first things that you'll notice about Amped 3 is the quirky (read: bad) humor that is all-too prevalent throughout the game. Whoever Indie Built has writing for them, really needs to be fired, or they at least need to contract a few Family Guy or ex-Futurama writers to help show them what actually is "funny". You'll start the game out snowboarding in a pink bunny suit, while your friends, one of whom is named "Weinerboy", racing along with you. After that brief little training level and an attempt at humor that will leave players wondering whether they were supposed to find it funny, you get to customize your player as you see fit. 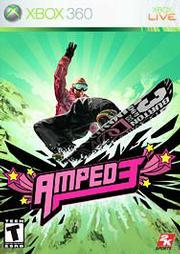 The customization options are just about as in-depth as a game like Tiger Woods, but without the fine-detail facial tunings. The vast amount of clothes, gear, and special costumes that you can unlock throughout the game is just mind-blowing sometimes, but when you think of all the sponsors that lined up to get their gear in the game, it begins to make a little more sense. You'll find gear from many real-world clothing and snowboard labels such as Burton, DC, Dragon, and many more.

Once players have their character designed as they see fit, the story mode proper begins, and Indie Built took a page from SSX3 and decided to design the game around not just one, but four huge mountains. All of these mountains are split into different areas, but they're all connected, and you can actually snowboard down the mountain and cross over into different ones if you so choose. You can take lifts up to one of several drop-points on each mountain at any time, so if you want to try a new run, you can just bring up the resort map, and choose a drop point, and then you're instantly right up where you want to be, which makes it very easy for players to figure out where they want to go.

Now that would be pretty cool in and of itself. However, there are so many little things to do on each of the maps to progress the story and to upgrade your player, such as story missions, where you do a little race or trick session or something that advances the story and subjects you to the game's cruel sense of humor.

Then there are also video opportunities where some guy will videotape you doing a trick or two, earning you some cash to buy new gear or clothes, and also increasing your "rep" on the mountain. Your rep really does not do much for the story, but it does kind of act as a score for how well you are doing in the challenges that are scattered throughout the game. One of the other challenges is Pro Shadows, where you follow an actual Pro Snowboarder and beat their trick scores.

A few of the other types of challenges includes Super Ninja Slalom, and my favorite, the Boarder Quest challenges. This is probably the one place where Indie Built's humor actually works. They basically overlay some 16-bit graphics displays from a fictional RPG, before the race starts, and then you're supposed to beat a certain score in a certain amount of time by doing tricks. For doing so, you'll receive stat bonuses or new tricks for your repertoire.

The actual snowboarding in Amped 3 is extremely solid. The controls take a bit of getting used to, especially if you are an SSX veteran. However, they are quite intuitive, and once players get the hang of them, they will realize just how great the system works. The control scheme exists somewhere between Tony Hawk and SSX.

One of the coolest things that you can do with the new combo system that exists in Amped 3 is that you can use "Butter", or basically lean forward or backward on the board to get bonus points similar to what you can in the Tony Hawk series, in order to increase your multiplier and points earned for those tricks. Of course, you lose all points for a trick combo if you crash, but if you keep racking up those points, and keep stringing together moves like 360s, flips, and grabs, then you could end up getting a huge combo in a single run!

Now while the snowboarding is great, Amped 3 doesn't just stop there. It also tries to take on sledding, hang-gliding, and snowmobiles, all with mixed results. The sledding is tame enough, and there are a few really great challenges with them where you basically go down the mountain and try to have the biggest crash possible to injure your character and collect the insurance money for it. The hang-gliding and snowmobiles though, leave a bit to be desired. The snowmobiles are not very responsive, and you really have no visual indicators as to how fast you're going or what your altitude is, which is very important when you're trying to thread a path through rings ala Pilotwings.

Aside from gameplay, one of the biggest things that can make or break a game like Amped 3 is the soundtrack. There are quite a few tracks on the soundtrack for Amped 3 included in the game, and they're actually all pretty good. There are songs from many different genres, from Rap, Emo, Rock, Techno, and even some 80's pop thrown in for good measure. And of course, you can always throw in your own music if you want thanks to the built-in custom soundtracks with the Xbox 360.

Amped 3 is also pretty solid graphically, as well. The draw distance on the mountains is sometimes just mind-blowing. You literally can see all the way down the mountain as soon as you get dropped of the ski lift, assuming there aren't any tall trees in the way of your view. Player models look pretty good, but nothing really next-gen, though. On the other hand, Amped 3 does have some of the prettiest terrain and snow that players will have seen in a game thus far.

One of the little things that Amped 3 does well is making the mountain seem "alive". There are always a lot of other snowboarders and skiers going down the mountain or just hanging around congregating around ramps or jumps waiting to see some cool tricks, and it really helps to make you feel like the mountain you're on could be a real place, and doesn't give you the feeling that you're the only one on the mountain as well.

Unfortunately, there is no multiplayer of any kind in the game, save for the few sledding mini-games where you just try to hurt your buddy more than he hurts you by running them into hazards and such. It would have been a treat to see online races or online trick tournaments, but hopefully it's on the list of things "to-do" for Amped 4.

Amped 3 screams is a very competent, solid and fun "realistic" snowboarding game. However, the bad jokes and lame writing really detract from the greatness. You'll never run out of things to do with this game between all of the challenges and the extra missions, so you won't really miss the multiplayer all that much.