A facelift, sure, but gameplay remains consistent

Does it feel "next-gen": Yes, because of the player models

Now that the Xbox 360 is here and all of the sports games are out, the big question is "how does it look?" Well, NBA 2K6 from Visual Concepts and 2K Sports looks fantastic. The player models are a huge improvement over their Xbox and PS2 counterparts, and most of them look eerily similar to their real-life counterparts. Now while that may be great for the people asking that one questions, that's great. However, there are many other facets of NBA 2K6 that really cement it as the best basketball game on the Xbox 360 so far.

Now the graphics might have made a huge leap with the new generation of game systems, but the gameplay apparently missed the bus. That's not necessarily a bad thing, though. NBA 2K6 on PS2 and Xbox were both fundamentally sound basketball games. The shot stick from those versions returns in the 360 iteration of the game, and it really does a nice job in letting players choose just exactly how they want to shoot the ball, fake a shot, or move the ball around a defender. The shot stick also still works on defense as the steal stick, and basically it lets the player dynamically try to strip the ball from the opposing offense. 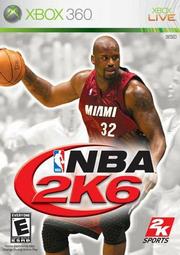 Aside from the somewhat gimmicky, but useful sticks, the improved post play is back, and when your game has Shaq on the cover, you'd better make sure that your game has a really good sense of how to play basketball from the post position. Backing down defenders and then dribbling around them or shooting over them is very satisfying, but it's not too easy to the point where all you'll do is get the ball underneath the basket to your team's big man to put up an easy two. Defense and offensive plays are still called with the d-pad, and the rest of the controls and gameplay are similar to the Xbox and PS2 versions of NBA 2K6.

Aside from the gameplay, Visual Concepts also carried over the sound design from the Xbox and PS2 versions of NBA 2K6. Kansas City native Kevin Harlan still shares play-by-play duties with Kenny Smith, and they do a great job of calling the games. You really don't hear any repeat lines until you've played about 10-12 games in a season, and even then it's few and far between, which is one of the best things you can hope for in any sports game. The two seem to really make a great team in the booth. The music in the game is also pretty good. It's pretty much a selection of Rap and R&B, but of course, you can always change your music with the Xbox 360 custom soundtracks control.

Now the graphics in NBA 2K6 really scream next-gen for the most part. The player models are accurately detailed down to the littlest things. You'll see Shaq's tattoos accurately and clearly on his huge arms. You'll see Tayshaun Prince of the Detroit Pistons look just as goofy and awkward as he does in real life. And you'll even see Richard Hamilton wearing his now trademark mask, with really cool reflection effects on it. One of the most subtle new effects on the players that you may or may not notice in NBA 2K6 is also one of the slickest in the game. The players sweat as the game is going on, and it's not just on their bodies. If you've been running both teams pretty hard throughout the course of a game, you'll notice the beads of sweat forming on their heads and arms, but you'll also notice little puddles of sweat forming in the small of their back under their jerseys.

Aside from the graphics, the biggest advantage that NBA 2K6 has over its competition in the NBA arena on Xbox 360 thus far is the fact that it actually has all of its gameplay modes from the Xbox and PS2 versions. 24/7 mode is back, The Crib is back, as well as single-season, exhibition, and franchise modes. So not only can you complete a single-season with your favorite NBA team, but you can also turn them into a dynasty, you can create your own player and take them through the street circuit and into the NBA, and you can customize your Crib as you see fit. The replayability of NBA 2K6 is heightened by the inclusion of all of these modes, but mainly by the online multiplayer over Xbox Live, and the online leagues as well.

Not everything is rosy with NBA 2K6, however. While the player models look great, it seems like the coaches and fans in the arenas were just ported over from the Xbox and PS2 versions of the game, and there really is no real innovation or evolution of the control scheme or gameplay from the previous versions, either. That being said, there are plenty of different gameplay modes, and there is also solid gameplay surrounding the new next-gen sheen of NBA 2K6. While it does have its faults, it is the best NBA basketball game on Xbox 360 so far.