Tiger delivers what is expected

The golf season is almost at an end, but don't worry folks. Swooping in with a very quite release is Tiger Woods '06. EA has always picked an interesting time to release their golf title. The golf season begins early next year, so why not release it then? That would help EA fans that also have to spend money on Madden, NBA Live, and March Madness, all within two months of each other. No matter how screwy and illogical the release date of Tiger Woods is, the game itself is not like this. TW delivers yet again and is starting to prove that it is one of the more consistent franchises today, but perhaps it's becoming a bit too consistent.

We all know that games need to evolve. They need to improve and change. This is where TW is getting too consistent. Each year is seemingly becoming the same game. EA might try to persuade you to believe there's change, what with the new additions of dual analog swing and a brand new putting system, but these new additions are weak in terms of enhancing gameplay. The objective of the dual analog swing is so that the gamer can control the point of impact on the ball, which determines spin, draw, and fade. The feature can totally be ignored and your score wouldn't be any different. It's useless because you can put spin on the ball after it is in the air so there's no need to do it in your backswing. Also, the game is not near difficult enough to the point where putting draws and fades on your swing is necessary. So, it seems that one of the 'big' new features to TW '06 doesn't change anything at all. 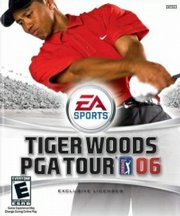 A new putting system has also been added. It's been revamped a little bit with the addition of a grid to give a better visual of how the terrain of the green is. To help the gamer putt, they can activate the putting line shot. This shows the ideal path the ball should take in order to sink it. The putting system is a bit more difficult this year because you have to control your swing in order to get the right amount of power. However, the putting system still suffers from one of the biggest flaws found in the TW series. I don't think there's one person in the world that would find a 10-foot putt to be harder than a 65-foot putt in real life. Well this can be the case sometimes in TW's virtual golf world. If you can get the ball onto a level surface, the putt is as easy as cake. In other words, straight-line shots are too automatic. I found myself fearing that 4-footer more than I did when I had a 30-foot straight shot.

TW's main season feature is the PGA Tour Mode and I was quite disappointed that nothing has changed. The mode has always done a good job of simulating events and your endorsements, but what about the 'feel' of being in a PGA season? Why not throw in a durability rating as a stat or even a mental fatigue rating. This way players can get worn out during a season, which in turn requires skipping a tournament or two in order to rest up. You could even add mid week workouts. In fact, this system of leveling up would be better than simply adding bars to a stat. It's already easy enough to max out a created player, so why not make it a bit more challenging? Another little gripe is how tournaments within the season are handled. Instead of treating the tournament experience just like a 'Play Now' game, spruce it up with in-game updates of gamebreaking plays by other players. I'd also like to have the option to pair up or play in groups with other computer players in the tournament. That way in the final round, you can be paired up with players near you on the leaderboard, possibly leading to a great Sunday showdown. Sadly I'll never get to feel what it's like to go up against Sunday Tiger at Augusta in the final round.

The game's visuals fall in line with how the gameplay has improved. I'm sure if you compared screens of last year's game and this year's, you probably wouldn't be able to distinguish between the two. This is not to say the game does not look good. TW has actually been a very detailed game to feast your eyes on; but just like everything else, nothing has been enhanced. There are a few improvements to facial animations, meaning they added a few. Probably my most embarrassing admission is that I extremely enjoyed the electronic-elevator music featured. I even turned it on during actual gameplay. Dave Matthews Band does feature the title song, but it's the TW exclusive instrumental tracks that shine. It's a great blend of soothing, smooth grooves while you golf on the coasts of Pebble Beach. EA has even introduced customized voice-overs for the created players. You can add your voice by choosing from different ones, and then you can further customize it by changing the pitch to sound just like you.

If I had to sum up how TW '06 is, I'd simply say that it's too easy. People playing the game for the first time have the ability to shoot 10 under par. That shouldn't happen. The problem is that if EA does decide to take the game up a notch in difficulty, the only way is to make the gameplay more complex and more realistic to mimicking real golf mechanics. Doing this might shun a majority of its fanbase. The best solution would be to make a very distinctive difference is a simulation mode and an arcade mode because as of right now, Tour Mode (the highest difficulty setting) is still a cinch. What hurts most about discussing the game in this manner is that it's clearly the best in the series, but is it worth upgrading from last year's game? After all, the game still features one of the best create-a-player modes out there. It took me about an hour to fully customize the physical look of my character. This was not a bad thing as EA really gets into detail on what you can do to the facial features. The game does have length which is always a plus. From the real-time events calendar to online mode on the PS2 and Xbox versions (sorry Cube owners) there's plenty of things to do in the game. Tiger delivers what is expected, but it's usually the unexpected that impresses.