The best Spider-man game ever

Ultimate Spider-Man should be played under the following disclaimer: This is not a sequel to last year's Spider-Man title. This is a new property. Any differences between this year's title and last year's title, albeit combat, web-swinging or otherwise, are strictly intentional. Proceed at your own risk.

The majority of complaints I found in other reviews stemmed from the differences between this game and Spider-Man 2. Of course they're going to be different; that's the whole point.

The first thing to really grab your attention in Ultimate Spider-Man is the game's visuals. Rather than recycle the graphic engine from Spider-Man 2 developer Treyarch opted for a cel-shaded graphical style that's more akin to the comic book than real-life. This is made all the more credible by the use of Ultimate Spider-Man comic book artist Mark Bagley's sketches as a template for all of the character and city models. The result is a game that looks like a moving comic book.

As for the game itself, Ultimate Spider-Man takes place in Marvel's Ultimate universe. Here, classic comic book characters and story arcs are placed in a more contemporary setting. Writers of Ultimate titles are given creative freedom to amend comic book lore as they see fit and the liberties are pretty obvious. The first time you meet Ultimate Green Goblin or Ultimate Rhino it becomes apparent that this isn't the traditional Marvel Universe. 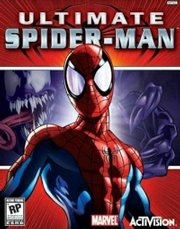 Gameplay is split between Spider-Man and Venom. As our titular hero you're given reign to a wide-open New York City full of gangs, emergencies and the occasional super villain. As Spider-man there are a number of events and goals to complete. Races, as the name suggests, involve following a given path in the quickest possible time. Combat tours have our hero battling local gangs atop buildings, in alleys and on the streets of the Big Apple, while City Events are randomly generated combat or emergency situations. In order to advance the story a certain number of each event or goal must be completed.

The amount of enjoyment found in racing varies. The easy races are all merely distractions, but the medium difficulty races take a large step in difficulty. This is due more to their complexity than their skill requirement. Races that require you to double back are almost intolerable thanks to the camera. At one point in those races you'll always find yourself swinging back into the camera, unaware of the location of your next checkpoint or what's directly in front of you.

The Combat Tours are a fun distraction, but they all follow the same formula: beat up the thugs, go to the next area, beat up more thugs. The City Events do the best job of making you feel like a superhero. This is partly because they're random and partly because they vary from delivering an injured person to the hospital to thwarting a bank robbery from a B supervillain.

Combat as Spider-Man is fun, utilizing his speed and web swinging to engage multiple enemies from both the air and the ground. Conversely, the Venom missions are linear point A to point B style objectives. Venom controls like a tank, forgoing the nimble precision web-lining of Spider-Man in favor of hundred-foot bounds from roof-top to roof-top. He is a brawler in the purest sense of the word, engaging enemies directly with haymakers and long-range strikes from his tentacles. Another dynamic unique to Venom is his suit. Parasitic in nature, the Venom suit constantly drains energy from the wearer, in order to recover this expended health you must feed on people-pedestrians or otherwise.

Switching between characters is a nice dynamic. On one hand you've got Spider-Man: the quick and agile do-gooder and on the other hand you've got Venom: the brutal and destructive killer.

If anything Ultimate Spider-Man does an excellent job of capturing that feeling of being a superhero. Whether you're swinging through heavy downtown traffic at breakneck speed, thwarting a robbery and leaving the scene just as the sound of police sirens begin to whisper or facing down foes two or three times your size.

The game's story mode and character dialog were both penned by Ultimate Spider-Man series writer Brian Michael Bendis. The story fits into continuity within the USM universe and reveals a few secrets as well. Unfortunately, it's through much of the story missions that the game falters. The glaring issue with Ultimate Spider-Man is the lack of mission variety within the story.

In an early mission as Spider-Man you follow a villain's path of destruction, helping out citizens along the way until you catch up to the menace and put an end to his spree. This is a fun mission. It does an excellent job of making you feel like a superhero and if you like playing it, don't worry because you get to do it again-twice. The villain or time of day may be different, but that's it.

For both characters there is a seemingly endless amount of pursuit missions in which you have to stay within following distance of an enemy as they fly/bound/run all over the New York cityscape.

It's almost as if Treyarch thought up three scenarios for the whole game and decided to just substitute in different characters and settings in order to keep it fresh.

The length of story mode also hurts. In spite of the repetitive missions I was enjoying the story and the boss battles between the rouge's gallery of the Ultimate Spider-Man universe. I was hoping that more would rear their ugly heads before the game's finale. Unfortunately the finale came much too soon. If you really wanted to, you could finish Ultimate Spider-Man in about six hours.

It's also very linear. A problem that will hopefully be addressed in future installments. As the series moves closer and closer to the Grand Theft Auto formula it would be great to see multiple story paths. As for now what we're given is a story that offers no divergence whatsoever.

Sure, it does allow you to return to the city once you've completed the story mode, in order to complete any remaining City Events, Combat Tours, or those infuriating Races. You can also go on rampages as Venom. This is fun for a little while. I mean, if mindless smashing worked for the latest Hulk game it can't be too bad here. After you've smashed your millionth helicopter the mode loses its novelty.

For more post-completion replayability Treyarch did the obvious: threw in a bunch of stuff to collect. Comic book covers, landmark tokens, hints and secret costumes will give the hardcore a reason to return, but for those only interested in the story mode, you could finish this game off in a day's time. Minor problems Ultimate Spider-Man experiences include the occasionally iffy camera during web swinging and repetitive one-liners from the main character.

Despite its problems major and minor Ultimate Spider-Man is not only one of the most faithful superhero games ever made, but one of the best in terms of graphics, style and execution. Fans of the Marvel series or just Spider-Man may find fault in the game's length, but as far as superhero games none do a better job of making you feel like the hero than this one.