Not as smooth as before

The notion of a real-time strategy game that becomes an action game when enemies are engaged is certainly a promising concept. I've always thought it would be a blast to control a single soldier or tank when I attacked enemy bases in Command & Conquer or Starcraft. Unfortunately, both aspects (RTS and action) of the game engine would have to be strong in order for this to be truly successful. This is what ultimately ended any chance of me enjoying Kingdom Under Fire: Heroes. The RTS aspect is almost unplayable at times, and the action is dull and repetitive.

At the outset of KUF, three characters are selectable. Once you choose your leader (and endure the seemingly endless load time), you're thrown onto the battlefield with a variety of different unit types at your disposal. Depending on who you choose, you can command infantry, cavalry, archers, orc axemen, elves, and a variety of other typical fantasy characters. Missions are standard RTS fare: Burn the guard towers, protect this unit, attack this base, etc. Unfortunately, the controls are absolutely terrible, and it's an extreme chore to move your units around to where you want them. 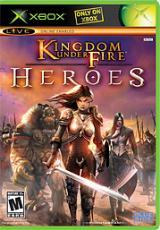 The camera seems to tilt down far too much, giving you a horrible view of the action. Kingdom Under Fire would have been infinitely better if it utilized a more traditional top-down camera for the RTS sections. The L and R buttons switch between your unit types, and an unresponsive and clunky point-and-click system will move them. It's almost impossible to tell where you're sending your troops because of the atrocious double whammy of the cursor and camera. It becomes a matter of finding out what general direction the objective is, followed by trying to figure out how to get the cursor over there.

While not engaged in combat, the D-pad selects special abilities for your troops. Archers can use fire arrows, and leaders can cast spells such as Meteors and Thunderstorms. Pressing the white or black buttons will tighten or spread out your troops prior to battle. Once in battle, the camera zooms in a bit to your leader, who you assume full control of. If the combat was as smooth and responsive as something like Dynasty Warriors, this would be the best part of the game by far. Unfortunately, the fighting controls are extremely stiff, unresponsive, and boring. Every battle can be fought by mashing on X randomly for a long time, with the occasional press of white or black to get help from your officers. The fact that it's very difficult to distinguish between your units and your foe's units doesn't help matters.

It's too bad the gameplay is so awful, because the game is very impressive on the technical end. Battle scenes are certainly epic, and feature dozens of on-screen enemies. You get a true sense of chaotic war when you see huge forces clashing with little to no slowdown, even with tons of particle effects and magic flying around everywhere. The sound effects are superb, but the voice acting and music leave much to be desired. Lines are delivered by sub-par voice actors, and everything ends up sounding cheesy. Musically, KUF is similar to the generic rock riffs heard in Dynasty Warriors.

If someone were to make a game with RTS elements as strong as C&C: Red Alert 2, as well as action on the same level as Dynasty Warriors, I'd be the first in line to get it. I had high hopes for this game based on the concept alone, but the execution ensured that I didn't have a single moment of fun with it.

Demanding for top-down view and complaining about awkward camera view, I bet the reviewer doesn't know how to use mini map or waypoints. Once you get used to micro controling with minimap, there are so much fun factors rewarded you'll have no time to get boring. I promise you there are plenty of strategic elements it's impossible to accomplish missions without thinking(it's not camera view or control matter. it's about tactics, and managing your troops that matters) The game is certainly not for everyone with steep learning curve, but rating the game even before scratching any strategic element is unwise.