Forget Lassie or Benji or Toto.

Gromit is the most reliable canine sidekick of all time.

The dog does that and more in the latest stop-motion effort from filmmaker Nick Park. "Wallace & Gromit: The Curse of the Were-Rabbit" represents the fourth adventure for the clay-formed characters and their first feature-length release.

In this disarmingly amusing installment, Wallace and Gromit are tending to their successful pest control business, named Anti-Pesto. With their English town readying for the annual Giant Vegetable Contest, the pair must contend with "the ultimate vegetable-destroying machine": a plague of rabbits.

Wallace, left, (voiced by Peter Sallis) experiments with controlling the destructive eating habits of a bunny while his loyal dog Gromit looks on in the comedy-adventure "Wallace & Gromit: The Curse of the Were-Rabbit."

Wallace's latest invention, the Bun-Vac, helps suck the beasts from their holes and into a glass receptacle (where they float around like the carousel sacrifices in "Logan's Run.") This procedure puts him in good graces with the aristocrat who runs the contest, Lady Tottington (voice by Helena Bonham Carter), much to the chagrin of her suitor, the trigger-happy hunter Victor Quartermaine (Ralph Fiennes).

But then Wallace happens upon the idea of using technology to curb the cravings of the hungry hares.

Unfortunately, this aversion therapy has some side effects. Before long the town and its vegetables are being ransacked by the cursed were-rabbit.

The golden age of stop-motion animation would seem to have peaked decades ago when Ray Harryhausen brought skeleton warriors to life in 1963's "Jason and the Argonauts."

This disarmingly amusing installment finds Wallace and his dog Gromit battling a bunny beast that is threatening their town's Giant Vegetable Contest. It can't be easy to wring so much humor and camaraderie from nine-inch plasticine figures, but Oscar-winning filmmaker Nick Park and his team find plenty of emotion in stop-motion.

But considering that two current movies are simultaneously thriving in multiplexes - "Were-Rabbit" and "Tim Burton's Corpse Bride" - a strong case can be made that the old-school art is in its prime.

The Oscar-winning Park employed 400 clay puppets and dozens of animators at his set in Bristol, England. The crew meticulously moved each piece, literally shooting the project one frame at a time. It took five years to complete.

The latest "Wallace & Gromit" isn't exactly CGI-free - there are more thab 700 shots that employ some kind of digital effect - but the general hands-on aspect of the craft gives the movie a homespun coziness to it. One can actually see the filmmakers' thumbprints left on characters in close-up.

Park certainly has his conceptual thumbprints all over this film, even though he shares duties with co-writer/director Steve Box and writers Bob Baker and Mark Burton ("Madagascar"). As with previous "Wallace & Gromit" shorts, "The Wrong Trousers" and "A Close Shave," Park finds a way to turn very peculiar plots into easy-to-digest adventures. He knows how to concoct a formidable villain, in this case the pompous, toupee-wearing Quartermaine. He understands that heart-racing action is just as important as humor. 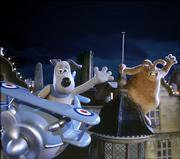 Gromit, left, tries to corral a beastly bunny in "Wallace & Gromit: The Curse of the Were-Rabbit."

Little has changed about Park's lovable lead characters even as their accounts become cinematically longer and more complicated.

Wallace is still the cheese-obsessed, absent-minded professor. Gromit remains the silent, semi-expressionless hero whose sharp comedic timing conjures up that of Buster Keaton. (Look at how funny the pooch makes the simple act of locking a car door.)

It can't be easy to wring so much humor and camaraderie from 9-inch plasticine figures. But Park and his team have managed to bring an admirable amount of heartfelt emotion to stop-motion.