Quick name a game that starts out in a small village, and includes bombs, potions, dungeons, buying items at shops, collecting keys, and breaking pots to get hearts. Also, the title of the game starts with "Legend of".

I'm going to assume you're not thinking of Legend of Kay.

Yes, there's some obvious Zelda influence in this game, but that's not always a bad thing. Think of it as "Zelda Lite", made for a crowd that's too young to understand the intricacies and difficulty of something like Ocarina of Time. Less emphasis is placed on puzzle-solving and far more on platforming. The player assumes the role of Kay, a cat who is in the process of mastering martial arts. For some reason, wild gorillas and rats are very angry, and threaten the peace of the land. If this all sounds very childish, that's because it is. Luckily, the game doesn't beat you over the head with the story very much, and it's told in skippable end-chapter cutscenes.

Kay is very responsive when it comes to movement and battle. While it may not be the deepest by any means, the combat system works without any real trouble. Primary attacks are performed with Square, and more powerful attacks can be performed in conjunction with the Circle button. Legend of Kay includes a nice combo system, and it involves using the triangle button after attacks. While in the middle of combos, orange arrows will appear onscreen indicating enemies and objects you can attack next. Pressing triangle along with the indicated direction will make Kay jump there quickly. At times, you'll have to use this ability to travel across chasms and difficult jumps by performing combos on objects called 'Zhongs'. 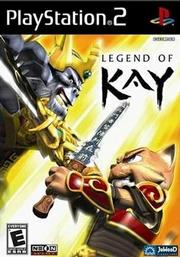 Besides the basic sword attacks, Kay can perform simple magic spells and use various items. He can summon hornets, go into berserk mode, and cast lightning on foes. Most of the game features Kay rescuing his fellow creatures from the traps of the rats and gorillas. The gameplay gets mixed up a bit by segments involving riding boars, dragons, and boats. The boar sections in particular seem like they're taken directly from Crash Bandicoot. Legend of Kay features little to no load times, and also includes a very unobtrusive and convenient save system.

All of the environments are extremely bright and vivid, and character designs are as cutesy and/or cartoonishly ominous as they should be. Outside of the occasional slowdown, Legend of Kay is visually solid. The in-game music is even better than the graphics, and wouldn't even seem out of place in a high-profile, big budget game. Unfortunately, the voice acting is perhaps the worst aspect of the game. Every species of animal has a different accent, and they're almost hilariously stereotypical. Get ready to hear some Rastafarian frogs and neurotic Jewish rabbits. The dialogue is very iffy as well, including confusingly written lines such as "May that my family is well still".

If you're a parent who is looking for a completely innocent game for your child, Legend of Kay may be the one you're looking for. It's simple, bright, cutesy, and has some fairly solid gameplay. For gamers over the age of 12 or so, it would probably be better to go the Ratchet & Clank route if you're looking for a deeper action/adventure platformer.