What an appropriate subtitle

Recommended: If you like fingernails screaching down a chalkboard

EA is not the most popular when it comes to translating comic book or movie franchises to the video game arena. For every success (007: Everything or Nothing) there are two or three stinkers (Catwoman, Goldeneye: Rogue Agent). That's not a great ratio for such a prestigious giant. Unfortunately, Marvel Nemesis: Rise of the Imperfects is yet another victim of big corporate cash-in crap development.

Released among the respectable X-Men Legends II and Ultimate Spider-man, it's glaringly obvious EA's comic-come-game entry lacks passion, purpose and most unforgivably, inspiration. What's even more astounding is that Rise had an all-star development cast of EA Canada (SSX, Need for Speed) and story written by none other than the highly lauded Mark Millar and legendary artist Jae Lee handling the character designs.

What the heck went wrong?

Well, Millar's story end is pretty cool in itself. When playing in story mode, you see one big interweaving story through the eyes of whichever character you choose. When you play through with other characters, you get their specific viewpoint on the story arc. Nice touch. Too bad you have to painfully wade through awful, mindless gameplay to uncover the story. When I say mindless, I mean artificial intelligence that is so antiquated that it's on par with the protagonist-seeking point-to-point AI of Bad Dudes for the original Nintendo. There's literally no challenge to be had, therefore boredom sets in rather quickly. 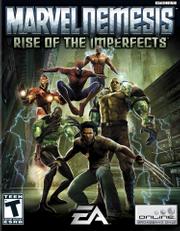 What's even more is that your basic attack, jump and block, augmented by two different modifiers don't give you near enough to do to justify using characters who should have such a wide variety of moves. It's really unfortunate. The boss battles are slightly better, making you use more of the environment to dispatch the main brute, but still doesn't provide any sort of real challenge.

Then comes multiplayer mode. It's a brawler/3-D fighting hybrid that inherently has a lot of promise. Sure, the superheroes' abilities are a bit limited, but wouldn't it be a thrill to have the Thing try to pound on Spider-man? It should've. The main problem is that the only main differences between characters' moves are aesthetic. There is nothing new to learn once you've learned one character. What's even more disappointing is that in order to create the illusion of balance, there seems to be only two modifiers changed between each character: speed and strength. The faster the character, the weaker he is. The slower, the stronger he is. What results is a mindless beat-em-up that is good for a passing play at a game store kiosk.

The graphics are the best part of the game, boasting great designs, smooth animations and some decent lighting effects. The sound is equally on par with today's standards and gets the job done.

deprived of Marvel vs Capcom for this?