Next verse - same as the first

We're less than a month away from the new NBA season, but if you can't wait that long EA has shipped its basketball series out already to fill your needs. Yes we all can't wait to see how Phil and Kobe get along. Will Lebron take more leadership over the Cavs and is there anybody that can beat the Spurs? I'd love to give you my predictions but what I'm actually here to answer is how NBA Live '06 fairs in the virtual basketball world.

It's no doubt that the NBA is the most 'Hollywood-esque' professional sport in the US. Players are glamorized like actors and the drama that can ensue off the court is just like a soap opera. EA took note of this culture and has added that razzle-dazzle into this year's game. With Superstar abilities, certain players rated well in specific skill will have extreme skills. So now controlling Allen Iverson will be much different than controlling David Wesley, even though they play the same position. In past games, everyone had the same moves. There was no difference from Wesley and Iverson in what moves could be done; maybe there was a speed difference in their moves, but they were the same. Players can be rated in five different offensive skills: power, shooter, scorer, high-flyer, and playmaker. The defense only has outside stopper. The skills are self-explanatory and have a great affect on the game. Now teams will be able to play up-tempo with the Suns or go with defense and strength as the Pistons. Teams have distinctive feels now that brings the game to life. Behind the back passes with Kidd or soaring dunks from the free throw line with Jason Richardson feels smooth and is easily executed. 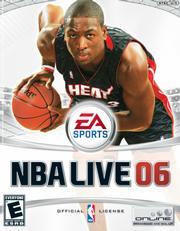 Still, even with the new Superstar features, Live still suffers from the same issues that have complimented the series for several years now. There's no way to describe it except as being too arcadey. Steals and blocks are way too frequent. I think anyone who ends up with 20+ blocks a game consistently should start to question what's going on. Of course adding in Superstar abilities inflates this frequency even more. Looking at the other end of the spectrum, the game still lacks fouls. On any difficulty setting, fouls are limited to 5 or 6 a game. In other words, getting to the free throw line is harder than Boykins laying one up over Yao. Player momentum is another issue. Players glide across the court being able to move parallel just as fast as moving forwards and back. This should not be and makes the game sloppy at times. It's a bit too easy to dribble around in circles until you finally break into the paint and score. One could feasibly have one player touch the ball on every position and still come out victorious.

EA claims to have redone the graphical engine and to be quite honest I didn't notice any changes at all. Besides a few new animations and the obvious Superstar moves, the game appears identical and while the look isn't overly terrible the same look every year is becoming a drag. Marv Albert and Steve Kerr handle the commentary and do a decent job besides the lag of some comments. Overlooking that issue, the duo makes interesting and entertaining comments to help the game flow.

The dunk contest was a major hit last year and it returns along with the 3-point shootout. Of course the moves have been expanded, but the same formula of execution is back. If you missed out last year, the dunk contest consists of chaining moves together by hitting the specific button you want before you land the dunk. It's a fun and very stylized mode. By stylized I mean the game does a fantastic job or recreating the look and feel of All-Star Weekend. Kenny "The Jet" Smith and Ernie "EJ" Johnson handle the commentary for the contests and do an even better job commentating than the regular crew. The mode also boasts online play for the weekend activities making it even better.

As always you'll be able to take a team into Dynasty mode and attempt to dominate such as the Bulls or Lakers of the past. The same features of free agent signing, training, trades, etc. are all here. But if there's one thing I noticed that was different, it was the amount of customization you can have on your team. Scouts are used to find and profile new talent. This way you can go with a fast team or a more control team. The new Superstar moves also come into play here as you will train certain players on your team to strengthen their ratings in order to gain the Power characteristic or if you may the Shooter characteristic. This was the most enjoyable aspect of the game for me as I love taking teams from the bottom to the top and play my style of basketball.

EA has probably produced the best Live installment in the series, but that doesn't mean they've made the best basketball game or even touched the potential the series has. There are still some major kinks that could be addressed but perhaps I'm being a bit too picky. After all, it's the most fun and most energetic basketball game out there. It'll be interesting to see what steps EA takes next year, but for now, I'm just going to enjoy owning people in the paint with my overpowered Shaq.