Wait, didn't we just play this?

Are you excessively neat and tidy? Do you alphabetize your DVDs, CDs and Video Games? Do you have to catch them all? Well if so good news: Pokemon, the single largest contributor to obsessive compulsive disorder since the Trapper Keeper makes its return to the Nintendo Gamecube in Pokemon XD: Gale of Darkness.

Developer Genius Sonority's follow-up to Pokemon Stadium, XD places you in the familiar (for series fans, at least) land of Orre where Pokemon run free and all is peaceful. But all is not well. The devious, believed to be defunct, Cipher Syndicate has begun to convert Pokemon into killing machines by closing their innocent hearts. As the main character, it's up to you to capture these creatures, open their hearts and put a stop to Cipher's plans of world domination.

A traditional RPG at its core, XD has you traveling about the continent fighting Pokemon trainers, capturing Shadow Pokemon and engaging in various side-quests. Combat is turn-based and allows you to summon two Pokemon of your choice for battle. Also traditional is the RPG length of about 40 hours with a substantial amount of time (10 to 15 hours) of additional gameplay for those Pokemasters who absolutely have to "catch 'em all." 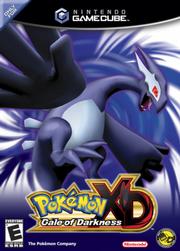 Graphically, the game is reliable. Textures are high-resolution, the game moves at a sturdy 30 frames-per-second, the particle effects for the many attacks are outstanding and the characters, Pokemon and otherwise, are well animated. In fact, the battle animations are a little too well animated, considering you spend more time watching the repetitive gestures of your and your enemy's Pokemon than actually battling. Actually, repetition-not "gotta catch 'em all" is the reoccurring theme of XD.

RPGs live and die by two things: their story and their combat. A good story engages the player, it drives them forward and motivates them to keep playing. Anyone who's found themselves awake at 4 a.m., exhausted, but still playing can attest to this. Likewise, an incredible combat system makes random encounters a joy to partake in. It too is engaging, offering plenty of room for experimentation and also gives rise to exploration. Not to name drop, but RPGs like Final Fantasy XII, Skies of Arcadia, or even Castlevania: Symphony of the Night had systems that did this. If either falters you are left with an experience that feels incomplete.

The story for XD, while deeply rooted in the series' mythos, is engaging. It makes sense and offers plenty of side-quests and some mild, circular, exploration. The story begins somewhat slow, but once the necessary character establishment is out of the way you dive head first into your central quest.

With the story intact the only thing left to hinder this RPG is its combat system and that's exactly where XD is derailed. An average encounter involves two of your Pokemon facing off against two Pokemon of an opponent. There really isn't much strategy involved here, just attack, receive damage and attack again until the opponent's out of Pokemon. This is acceptable for the first few hours, but the difficulty never really spikes. Your Pokemon are always one step ahead of the competition and if you keep one Pokemon in the fray for every battle the result is a cuddly killing machine that can always bail you out of a tight situation if you're caught off guard by the occasional difficult battle.

The system itself makes a few attempts at complexity. Pokemon have specific weaknesses and resistances against elemental attacks and when the proper Pokemon are paired together new attacks can be accomplished and new combos can be executed. Sadly, these complexities are never really put to any practical use. They can be, sure, but they can just as easily be ignored and the game plays almost exactly the same.

The developers seem to understand this too, considering many of the more complex commands or features aren't mentioned in the manual and are vaguely explained by the optional tutorials. In their attempts to make the combat system easy enough for what seems to be their target audience they removed the sense of challenge as well.

The result is a system that is both boring and, again, repetitive.

If you're an RPG fanatic XD's epic length and sheer number of side-quests will be enough to satisfy. If you're a 20-something Pokemon fan (God save you) needing a fix this should suffice based on the sheer amount of Pokemon characters and the plot filled with Pokemon lore. If you're a Nintendo loyalist who's starving for more exclusive RPGs play Final Fantasy Crystal Chronicles again. If you're a gamer trying to get younger siblings interested in RPGs pick another one because based on simplicity and repetition alone Pokemon XD: Gale of Darkness could very well sour them to the entire genre.