The members of Unknown Stuntman know all about old school punk because they were there to see it.

"We wanted to play music like what we grew up on, maybe a little more refined, but nothing over two minutes long," says guitarist Jeremy Sturgell.

He and vocalist Nic Beck have been performing in bands for more than 15 years. In that time, they have witnessed the changing face of Lawrence's punk scene.

"There are two groups of punk rockers in Lawrence: the older guys with families and the younger guys," Beck says.

Unknown Stuntman definitely falls into the first group. The members, who range in age from 29 to 36, were veterans of acts such as mi6, Sense of Self and Speed Dog Champion before starting Unknown Stuntman in 2002.

"We wanted to form a band without any goals," Sturgell says. "Aaron (Riffel) and I were both sick of touring and missing our families, and we weren't trying to get signed by a big label. We just wanted to play music locally for audiences that wanted to hear some punk rock."

Despite shunning the rock-star lifestyle, the band still wanted to produce music, so it released a self-titled debut in 2003.

"We did our old EP in a weekend," says bassist/vocalist Riffel. "This one took a year, and it's a lot better."

During the year it took to craft the new record, "Natural Male Enhancement," one member of Unknown Stuntman got married, then divorced; one's wife had a baby right before recording began; and one had a child while the band was in the studio. The CD release will be celebrated today with a live show at The Replay Lounge, 946 Mass.

"The main themes are anti-Bush, substance abuse and our genuine love of punk," Beck says. "The rest of the guys don't necessarily share my political views, but they let me write what I wanted to."

Beck's struggle with substance abuse appears in the song "Give It Away," which includes a sample from Burt Reynolds' "Smokey and the Bandit." 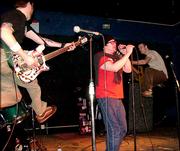 "It's about wanting to make drugs legal, and about the government not telling that I don't have the right to destroy my body. But at the same time it's about being older and a father and the desire to be responsible and take care of someone," Beck explains.

Not all of Unknown Stuntman's songs have such a deep message though. In fact, the band members don't even agree on the meaning behind the name "Natural Male Enhancement."

"There was a kind of hidden message in it," Beck explains. "It was about how through the course of the year we all got to be friends and helped each other through some rough times."

"No it wasn't," Sturgell counters. "It was about those commercials, and you know it."

Though the name of the disc is up for debate, the bandmates are in agreement over the meaning of punk in their lives.

"At this point it's almost a religion, almost a philosophy for us," Beck says.

Unknown Stuntman cites everyone from The Ramones and Replacements to local bands like Iron Guts Kelly and Mass St. Murder as influences for its music. The band credits other musicians in the area for keeping it performing and in love with music.

"All of us are pretty over the hill as far as age," Beck says. "But even as we get older, punk rock is still an inspiration."