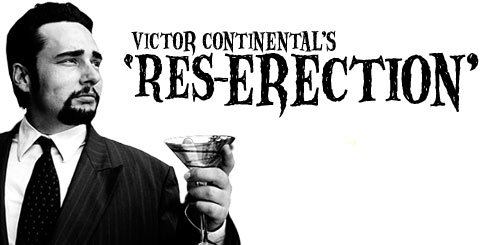 The Victor Continental Show is a singular, irreplaceable part of Lawrence culture.

This weekend's so-called "Res-erection" show marks the Lawrence troupe's 12th production since starting in 1998. In some ways, it's typical sketch comedy - everything from ancient history to U.S. politics, from Hollywood to Lawrence is fair game for VC's racy humor and predilection for double entendre.

But then, you'd be hard pressed to find another comedy show that focuses so mercilessly and lovingly on this, our fair city. Nor do typical sketch comedy shows feature segments like "Shitty Deal Puppet Theater," a crass, no-budget puppet show hosted by a gin-loving wino named Mr. Doper and a burp-happy green puppet named - you guessed it - Mr. Burp. The 90-minute extravaganza also features original show-stoppers and crowd participation via drinking games.

At the center of the show is, predictably, Victor Continental - the slick gigolo, so-bad-that-he's-good schmooze artist. Mr. Continental sat down with lawrence.com to preview this year's show.

Victor Continental: Hello Phil Cauthon, you are looking remarkable today, and I love your sexy lawrence.com website and it's special-bus kid brother, the lawrence.com deadwood edition. It's like having sex in a paper.

Thanks. How are you feeling today?

Ahem... OK, so why don't you start with your childhood?

Ever since I was a baby, I have grown. Sometimes up. Sometimes out. It really depends on my age and who is in my company. You can read all about my childhood in my upcoming auto-biography 'Donkey Punch: My Life in Women and Entertainment.'

Apparently you are constantly having sex - don't you find it exhausting?

Not really, Phil Cauthon. There is nothing, to me, more exhilarating than entertaining people with my Victor Continental comedy show and sometimes having sex with them. I have been looking for a way to combine the two, and a ping pong ball trick, and I believe then I would have the ultimate theatrical entertainment. So far, however, this is only legal in Amsterdam, Brazil, and that place in France where the naked ladies dance.

Behind-the-scenes blog: Great Ex-patations: Back in the USSA

What drives you to create?

Usually a Limo, though sometimes an Alfa Romero S Class.

You smoked on stage during the last show, despite the smoking ban. That was pretty cool.

I'm glad you appreciated it. It states clearly in the ban that smoking is allowed as part of an artistic endeavor. I know this because my lawyer has told me, and a lawyer he would not lie. So when I went on stage and said 'This is an artistic endeavor', it was okay for me to smoke. I felt so sexy.

Despite your considerable tolerance, you got a little tipsy during the last show. What happened?

We at the Victor Continental show believe that alcohol and comedy should always be mixed. Sometimes this means that you get fucked up. For me, that day was Friday night. But I will tell you, Phil Cauthon, it was the best time I don't remember.

How do you prepare for the show?

I have a Brazilian, a dry martini, a smoke, and the shampoo girl from Sakaroff's. Work in gently. Rinse. Repeat.

What do you feel are the most important issues in Lawrence right now?

A lot of people would tell you that the most important issues right now are the difficulties of maneuvering roundabouts, the divide between central Lawrence and the ever expanding West, the relative merits of skate shops downtown, and the unclear vision of Lawrence's future. I think the problem is that they are not having enough sex.

That seems to be a theme.

It certainly makes the ability to get around roundabouts less important. Okay!

The 2004 Victor Continental Show. Victor gives out an autographed shirt, and an instructional slideshow on how to take over the world.

What do townies know that others do not?

How to drive the right fucking way down Tennessee and Kentucky streets. I tell you, it's not that difficult. One goes one way. One goes the other way. Follow the arrow. Capice?

I am pretty bad ass, Phil Cauthon. I am not just another pretty face. There is brawn behind these sexy, sexy brains.

How about some quick answers to some serious topical issues?

Sure. What do you think of the debate on evolution?

I like to think that I came from a monkey - but a sexy monkey, who loved a lot of lady monkeys.

The 2004 Victor Continental Show. A look at the writing of a sketch to give back to the audience.

I think it's neither.

If two people want to have sex, they should have sex. It doesn't matter if they are two boys, two girls, or that saucy barista from the Bourgeois Pig. But first they should attend my world-famous comedy show, this Friday and Saturday night.

How about the War in Iraq?

We need to stop sending troops, and start sending my comedy show. They always talk about the theatre of war, but have you ever seen any theatre there? Nor have I. So send my show. Then people will see the show, and they will not want to have war. They will want to have elections, and infrastructure, and democracy, and wild tantric monkey sex.

Again, penicillin will clear that up. Apply to affected area, rub gently in until cream becomes translucent, wrap in protective gauze. Then dance.

I hope, when I come before God, God will look at me, and God will maybe smile, just a little, and say 'Victor Continental,' and I will say 'Yes, God?' and God will say 'Welcome home, you sexy, sexy man.' Then I'll thank God, slap her on the ass, and find the celestial cash bar.

Thanks for you time, Mr. Continental. 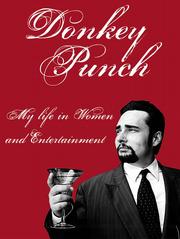 Selections from "Donkey Punch: My life in Women and Entertainment" by Victor Continental

Chapter One: Here We Go!
"A lot of people ask me, what is it like to be Victor Continental? It is an almost impossible feeling to describe. Imagine an untouched forest, in a magical land where nobody wears pants. In this forest is a throbbing waterfall, which gushes down thousands of gallons of water per minute. At the top of that waterfall is a tall and hard oak, the branches of which jut out majestically. On the top on one of these branches is a sweet and timid little bird. Being Victor Continental is like being the bird that's having sex with that bird."

Chapter Eight: Westward, Ho.
"I have performed all over the world. New York, Milan, Paris, Prague, and the public bathrooms in Des Moines. Was I ever bad? No. Was I ever arrested? Once, but the Pope has since forgiven me."

Chapter Thirty-two: Can't Keep My Thighs Off You
"A lot of people say to me, Victor Continental, don't you get bored of talking about sex? My reply to them is 'Do you get bored of breathing'? For me, sex is fundamental. It's Fun. And it's mental. There is no bad time to have sex. You can have sex just about anywhere, if you are flexible, and you carry both cash and credit cards. This is key."

Chapter Two-Hundred and Thirty Eight: You don't say.
"People ask me, 'Victor Continental, is there anything you will not say?', and I look them in the eye and say 'Yes. I will never say Reluctant Tapioca Litter Box. Again.' See, I have morals!"

Chapter Nineteen: My Travels in the East
"After I had sex with the gypsy girl, her gypsy cousins, and her gypsy grandmother, I was pretty pleased with myself. Why, you ask? Because I had sex with a gypsy girl, her gypsy cousins, and her gypsy grandmother. But one thing that I was not counting on was the gypsy curse from her gyspy mother. (I'm sorry Tanta Rosa, you weren't at home. Okay!) It was relatively mild as far as gypsy curses go, but you try explaining that the purple rash is only voodoo syphilis. By that point, I wearied of my travels, so I hopped the next Greyhound and put Akron in my rear view mirror."

Chapter Sixty-three: Lubricating the Wheels of Comedy
"Sometimes, people tell me, 'Victor, you drink too much.' Also, sometimes people say, 'Victor, take your thumb out of there.' I ignore these people."

Chapter Forty-Seven: Inside
"One difficulty in theater is that cast members sometimes become romantically involved with one another. With my show, the problem is that there are too many beautiful people and it works against them. They cannot forge truly strong ties with one another because they are too busy being adored by the audience. And myself. They are too sexy to keep to themselves so I encourage them to go forth and spread that love to the people in the house. This is how we get so many businesses to sponsor us - we have the sexiest fucking cast this side of 'Rent.' If you give up the booty, you will get a table up front."