It must be his e-pheromones.

That's the only way that Michael Hendrickson can explain his burgeoning fan base on MySpace.com. Without so much as one live performance or one album, the 21-year-old KU junior is consistently among the top-ranked independent artists on the MySpace charts. His alter-ego "Sexy If You're Maladjusted" has about as many profile views (16,000) and "friends" (2,000) as The Appleseed Cast, an established Lawrence band that has toured the world over for nearly a decade.

How did he do it?

"I think it's pity love," jokes the Hutchinson native, who composes all of his music on a laptop computer in his dorm room.

"It's not easy for me to believe either ... I'm basically just a failed poet with a strange voice who sounds like George Clinton if he didn't have any funk."

Hendrickson's assessment of his own music is pretty accurate. It's avant-garde, left-field, outsider, experimental. It's definitely not "emo" and it's probably the last thing you'd expect to create a buzz on MySpace.

All of which, of course, begs one simple question: Is Hendrickson cheating?

"I'm just some guy who has a particular taste in music that seems to be nibbled on by young adolescent kids," he explains. "I wish I knew how to cheat. It'd be a lot easier." 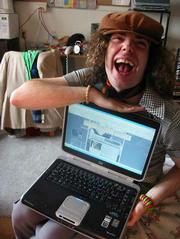 Michael Hendrickson, 21, is a KU student who uses MySpace to promote his music alter-ego "Sexy If You're Maladjusted." Hendrickson's MySpace page has more than 16,000 "views" and 24,500 "total plays" (myspace.com/siym

Welcome to the New Social Order, where the malls are empty and the telephone lines hum with the incessant blips of instant messages. The kids are still playing, but they have a new playground. It's called MySpace, and it's already snared 32 million people with its addictive social-networking talons.

Don't have a MySpace profile yet? Loser.

"I know very few people that don't have one," says Holly French, a 23-year-old Lawrence resident. "Those people are usually very adamant against it, just because it's the popular thing to do. But everyone I know who was like that who finally got one - I've heard that they're very addicted."

French, it should be stated, has a life. She interns with a local booking agency and she enjoys politics, animals, meteor showers and singing along to music at the top of her lungs while driving alone at night. All of this information, of course, is viewable on her MySpace page, which also offers candid blogs from her everyday life.

"I don't really put them up there to get feedback," she says. "They're just thoughts that are passing and maybe I thought a friend would find it amusing, but I don't have time to call them."

The ability to keep in touch with scattered acquaintances is what drew French to MySpace. The music, however, is what kept her hooked.

"I don't even look at Friendster anymore," French says of the rival social-networking site. "Obviously they've noticed that MySpace is starting to take over because I'll get Friendster reminders in my junk mailbox like, 'It's been a long time since you visited us...'" 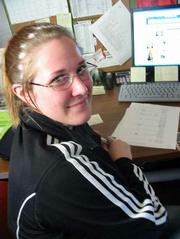 Holly French, 23, is an intern with Hunt Industries who uses MySpace to promote shows, discover new bands and keep in touch with friends (myspace.com/huntindustries)

Created just two years ago, MySpace has taken the lead in the social networking sweepstakes - so much so that Rupert Murdoch's NewsCorp recently purchased the site for $580 million.

Independent bands flock to the site to post mp3s, list shows and seek out new fans. Artists, models, filmmakers and comedians are also hip to it, basing entire marketing campaigns on its vast networking capabilities.

In short: there ain't nothing MySpace can't pimp.

"It's the most ridiculous phenomenon ever, but it's a fantastic marketing tool," says Kristen Ferrell, a local artist who uses the site to seek out new customers for her line of custom T-shirts, underwear and accessories.

"I've made so much money off this thing, and that's just from having a picture up there: 'Here's me; here's a couple of my shirts; here's some of my art - give me money.' And they do."

Ferrell's aversion to chatrooms and message boards initially prevented her from jumping on the MySpace bandwagon. After an artist friend convinced her to put up a page exclusively for her art and clothing, however, she began to recognize the site's potential.

"It's so amazing because you can go through and pick your target market," she says. "It's like, 'Oh this girl - she's about 21, she likes art, she's into underground stuff, she likes this band that I did an album cover for ...'" 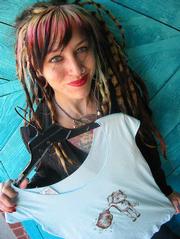 Kristin Ferell, 29, is a Lawrence artist who uses MySpace to promote her custom line of clothing and accessories (myspace.com/kristen_ferrell_art).

"I'll just post them publicly and be like, 'See this guy? This guy sucks. All you fiery little girls e-mail him and tell him he sucks,'" she explains. "And normally the guy changes his profile name."

All the right spaces

For self-promoting musicians like Lawrence singer/songwriter Brett Armstrong, the key to longevity on MySpace is to market tactfully and not invoke the ire of the community.

"I try to use it not so shamelessly, because I know there are a lot of bad bands that have used it as their only outlet for stuff," Armstrong says. "When you ask strangers to go watch you play the guitar for an hour it's inherently egotistical and weird and slimy anyways."

Armstrong, who recently released a debut EP titled "Selling Something or Myself," says he probably looked a little too desperate when he first put up a band page.

"It was like middle school all over again - I had zero friends and I was doing everything I could to get some," he recalls. "After I had my clique of 50 friends I was like, 'OK, now I don't feel obligated just to get anyone; I'll start asking people who really might like this.'"

Though the site has only helped him sell a handful of CDs, Armstrong says it has been a great way to get people to come to shows.

Brett Armstrong, 23, is a Lawrence singer/songwriter who uses MySpace to promote his shows and records (myspace.com/brettarmstrong).

In the quest to get noticed on MySpace, a little innovation can work wonders. Birthday Party Records owner Matt Morgus came up with a nifty idea to promote his label's first release "Hey Friends, It's Kelpie!"

"One day before I left work I got this genius idea of making (our profile picture) a hot girl, just to see what would happen," he says. "The next morning when I came into work I had a ton of new friends and people left comments like crazy."

Kelpie's disapproval with the stunt eventually brought it to an end, but Morgus was already onto a better idea: purchasing a third-party software program that allowed him to post Kelpie ads on all of his friends' pages at once (as opposed to posting individually more than 1,000 times).

"There are so many little ins and outs of this dumb thing," Morgus says. "I see it as just another piece of the puzzle. I'm trying to promote records and I think the internet is probably one of the best ways to do that now." 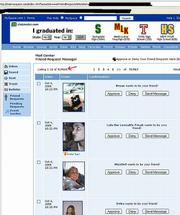 According to Terry Taylor, a show promoter for Hunt Industries, MySpace is now the only website that a lot of upstart bands have. Though Taylor encourages bands to use the site, he says it appears amateurish if MySpace is their only web presence.

"It's nice to have these tree branches, but you should always have a base that is your own," he says. "Let's say MySpace all of a sudden wants to charge $25 a month and all the kids start dropping like flies. Then all the bands who spent all their time doing their MySpace pages are kind of shit-cricked."

And of course, on a social level, MySpace also has the potential to lessen the quality of interactions. According to Chet Kueffer, a 25-year-old Eudora resident who uses the site to keep in touch with his old Lawrence friends, some people probably use MySpace for more than it's worth.

"It's probably the lowest medium of communication there is," Kueffer says. "Obviously the highest medium is face-to-face; then there's phone, letters and e-mail. MySpace is even lower than that ... Some people are like, 'I have 537 friends' and they don't even know who those people are."

When it comes to efficiency, however, MySpace is Kueffer's tool of choice to inform his friends about all the humdrum happenings in his daily life.

"The easier it's made for people, the more likely people are to try to maintain relationships," he says. "Anybody can keep in touch, but it seems like, in general, people - myself included - are lazy. It's kind of like when you graduated from high school and you're like, 'Yeah, stay in touch' but you don't really."

I have old Sexy If You're Maladjusted songs now up at www.myspace.com/siym

Go to google and put in "myspace",...there are links to all sorts of myspace extras.

myspace rules, as shameless as it may be, and i'm just about to show how shameless i really am: