Does the lastest Mega Man improve the series?

The Mega Man series is going to stay in my top series of all-time list, but I will admit that's mainly because of the NES games. The Mega Man series, considered by man, seems to have dropped off since those days. It's as if Capcom is turning the Mega Man series into more of a storybook rather than a roller coaster. The main line of Mega Man has stopped and been replaced with the Mega Man Zero line. This is the fourth in the franchise and it lacks the same thing the other games lack as well, more action.

Capcom has put its focus on bringing a movie like presentation of Mega Man when all we really want to do is blow through levels and enjoying some of the best boss battles ever. Now we have to deal with interrupted cut scenes, down time of exploration and just going from level to level. I actually want to cry for the classic stage select screen. While the action here is still great, there's just not enough. You'll be spending most of your time dealing with your weapon selection, creating new chip sets (armor), and deciding which elves you'll have to back your actions up. It's not necessarily the new features that hurt the game; it's the pacing of fiddling with your equipment along with the story and action that is offset. 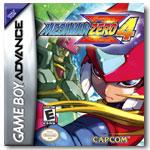 You create the chip sets with parts gathered throughout the game. As you play further you'll get better items; hence, better equipment. These chip sets give Zero extra abilities and stats. Players will be able to freely mix different items together in order to see what kind of chips can be made. There are dozens of different chips that can be constructed and as you replay the game you'll discover new ones. The elf equip feature allows Zero to have backup during his missions with special powers from these elves. Different elves have different powers and it's up to you to decide what suits your play. These features do make the game deep but it borders on the line of an action RPG and may start to lose some of its edginess as a true action game.

One drastic change that can be debated on being good or bad is the learning curve. Capcom intended to make the game harder with the new weather system, but it tends to be a gimmick than more of a challenge. The weather system allows certain enemies to have more abilities and be a bit tougher to bring down. At first the weather effects can be overwhelming but as you level Zero up with new gear and abilities, the weather effects are nullified and you'll be able to breeze through them when they occur. It is nice to see Capcom adding something to the environment of play to help vary up the gameplay in a repetitive series.

The series has taken a turn towards the anime side and it still looks good, even if some may not like it. The cutscenes are represented with art stills that are colorful and wonderfully drawn. The music is still not what I would like from the Mega Man series, but it's still got a few catchy techno tunes. Sounds effects deliver crisp, sharp sounds as you hear blasters and explosions going off.

It's obvious Capcom is trying to add a little more substance to the Mega Man series by adding in chip sets, weather effects and a deeper story, but it's still not quite enough to make up for its shortcomings. The game has some depth with the new variations put into the gameplay, but it's oddly paced as it tries to decide whether it's a true action shooter or an RPG with action elements. Fans of the series will get what they are expecting while others who have been out of touch with the series looking to rejuvenate their fast paced, Mega Man action will get something unexpected.