But four years ago, she was diagnosed with an allergy to gluten, a mix of plant proteins found in wheat. She also learned she was allergic to dairy foods.

Brown quickly changed her eating habits. That meant no more croissants - or many of the other foods she'd grown accustomed to eating.

"That's when I realized the power of food on one's health," she says. "I went from being so sickly my entire life to being in perfect health and never getting sick."

Brown is hoping to pass on those food lessons to her hometown of Lawrence. A month ago, she opened Local Burger, a restaurant at 714 Vt. featuring locally raised meats and locally grown produce with the health-conscious in mind.

Hilary Brown, owner of Local Burger, emphasizes locally grown, organic foods in all the restaurant's meals. Brown displays plates of the Too Good Turkey Wrap, left, and the Steamed Brown Rice and Veggies with Tamari. The restaurant opened recently at 714 Vt.

Nearly all of the meats on the menu are raised without antibiotics or hormones, and the vegetables are grown organically, without pesticides or herbicides.

Most of the food comes from around 15 farmers, ranchers and other manufacturers within 50 miles of Lawrence.

"You want to support people who are growing things locally," Brown says. "And besides, the food tastes better."

Brown, a former occupational therapist and part-time caterer, has had the idea for Local Burger for years. A stint at the Natural Gourmet Cookery School helped solidify her chef skills.

Brown says there are a handful of restaurants similar to Local Burger spread across the country. She figures there's no better place than Lawrence, where she's lived her entire life, for the concept, considering attendance at the Lawrence Farmers Market, interest in organic farming and support for local business. 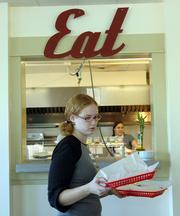 Local Burger employee Rebecca Asberry picks up an order from the kitchen.

"Lawrence sure seemed the perfect place for it," Brown says. "If it doesn't make it here, it's not the time for it."

The centerpiece of the menu is the burger. They come in beef, buffalo, elk, pork, turkey, tofu and veggie varieties.

Other menu items include turkey wraps, fruit juices and smoothies. The desserts - including peanut butter balls and key lime pie squares - are made without gluten, dairy products, refined sugar or artificial sweetener.

And if you want to know exactly what's in your food, just ask. The restaurant keeps a list of ingredients on hand.

Locally raised beef from Amy's Meats is featured at Local Burger. Amy and Dan Saunders raise cattle without hormones on their land in Jefferson County.

"I want people to know what they're eating," Brown says. "I think people have a right to know."

Local farmers and ranchers are excited to have an ongoing buyer for their products.

"It helps," says Amy Saunders, co-owner of Amy's Meats north of Lawrence. "As we grow each year, we know for sure this much meat will go to restaurants. Banks are always happy to see you've got a steady source of income."

Tucker Saunders, 3, dives head first into a feed bag in order to reach a pellet at the bottom. Tucker was helping his mother and father feed the cattle the family raises at Amy's Meats north of Lawrence. The beef is naturally grown without any added hormones. It is featured at the new restaurant Local Burger, 714 Vt.

Saunders is providing some of the beef for Local Burger. Her ranch provides meat with no hormones and "sensible" use of antibiotics.

"We raise the cattle completely," she says. "We have a close friend who owns a locker north of Topeka. That's the only time it's out of our hands. You get what you pay for. We focus on the genetics of the animals. We go back and look at pedigrees. We've got consistency."

Bob Lominska, owner of Hoyland Farm in southern Jefferson County, has provided okra to Local Burger and plans to also sell green peppers, arugula and squash to Brown in the future. Brown says she will use locally grown vegetables when they're in season but will rely on a Colorado organic food service the rest of the year.

"I back it 100 percent," Lominska says of Local Burger. "Everybody I talked to certainly thinks it'll work. We've eaten there several times, and the food was good."

So far, Brown says she's been pleased with business. It's busier at lunch than at dinner, and the buffalo burgers are especially popular.

Brown says she plans to have a liquor license by mid-November to offer locally produced beers and wines.

Some customers who came to the restaurant shortly after its opening complained about small portion sizes for the price. But Brown says she's upped portions since then.

Still, a deluxe burger, order of potatoes and drink will run around $10 with tax.

"You hope enough people appreciate it," Brown says. "I'll find out. I totally think it will work out. I think the market's ready. I did my research. I think people will pay a slight premium for this."

I'm so glad this article came out! I've been meaning to go try this place,but I had forgotten about it.It sounds like just the kind of place for me.Supporting local business(and farms),and eating more healthy are two things I strive for! I hope they have some good specials once in a while,cause I am also a penny pincher!