As good as Symphony of the Night?

Castlevania: Dawn of Sorrow is the best game for the Nintendo DS and rivals Symphony of the Night for the title of best Castlevania ever. Yes, it's that good. While it can be completely finished in under nine hours, it's virtually all superb gameplay from beginning to end.

Players once again assume the role of Soma Cruz, the silver-haired protagonist from Aria of Sorrow. Also back from that title is the soul-collection system, and it's deeper than ever. Souls are randomly collected based on your luck level as you destroy enemies. There are three basic types of souls. Red souls are generally projectile attacks, and are activated by pressing up + Y. These vary from deadly playing cards to huge axes, and you'll find yourself using them a lot. Blue souls are mapped to the R button, and are usually either summons or attacks. Several creatures can be summoned with this, including devils, skeletons, and corpseweeds. While a creature is summoned, you can control where they attack by using the touchscreen. It may be a decent idea, but it's rendered fairly useless by the fact that you can't control Soma while doing this. Yellow souls are always on, and boost certain stats or abilities (such as throwing strength). The sheer amount of souls available ensures that no player will play through the same way. I constantly changed my equipped souls throughout the game depending on the situation. 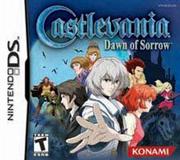 Once you receive the doppleganger ability, you can actually set up a backup soul set that's accessible by hitting X. For instance, my standard setup (the 'A' set) was mainly for battle and levelling up. My projectile was a holy water-esque attack, my R ability was a massive laser beam, and my yellow soul boosted my strength. My 'B' set was mainly for exploring. For my up + Y attack, I used a projectile that allowed me to pass through walls, my R attack turned me into a bat so I could reach high areas better, and my yellow soul raised my luck so that money would appear more frequently. In addition to these three basic souls, there are also some that permanently affect Soma. These are usually in the form of abilities like double-jumping or fighting underwater. The soul collection system ensures that every player has a unique experience with the game, and finds their own preferred soul set that works for them.

As is always the case with every post-SOTN Castlevania, there is a ton of items to be found. While not as highly customizable as the PSX game, there is still a basic equip screen for weapon, clothing, and one accessory. Weapons are usually either swords that attack quickly, or more powerful axes and maces that take longer to swing. Each weapon has a special attack (activated by the A button) that consumes a small bit of MP. Clothing is usually for defense, although special items will highly increase specific stats (like the lucky "Three Sevens" robe). Accessories are generally necklaces or earrings that raise specific stats or serve special functions, like making enemies drop hearts or money more often. 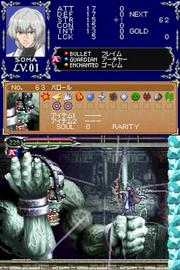 New to Dawn of Sorrow is the "Weapon Synthesis" system. After you've collected souls, you can take them to your friend Yoko, and she'll fuse specific souls with weapons. In addition to helping the stats of the weapon tremendously, it will change the physical shape and name of it as well. Therefore, a spear can turn into a much more powerful trident if you have the right souls. It's a very interesting system, and you can make some truly powerful weapons if you have the right souls.

There is a large variety of enemies in the game, including such familiar Castlevania mainstays as the Axe Armor, Killer Doll, Skelerang, and (of course) the ever-annoying Flea Man. The new enemies are great as well, and all of them feature superb animation and varying attacks. Previous games in the series were famous for their giant, difficult boss fights, and DOS is no different. There is over a dozen giant bosses to be encountered (some optional), and some of them are extremely challenging. New to this DS version is the "Magic Seal" system, one of the few applications of the touchscreen. After you defeat a boss, you'll be required to draw one of five magic seals around its body to ultimately destroy it. While this is a decent little gimmick at first, it can be terribly, terribly frustrating later in the game when you barely beat a boss, only to fumble when trying to draw a complex symbol. When this happens, the boss regains a chunk of HP, and you have to knock him down again and retry the seal. It usually isn't a huge issue, but the last Magic Seal is somewhat complex, which isn't good considering how hard the later bosses are already. 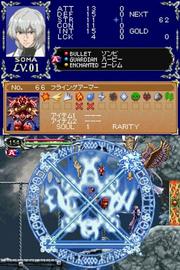 I really hope that gamers new to the Castlevania series realize that when they 'beat' the game for the first time, they probably haven't actually beaten it. Sure, you can get to the end credits scene at around the 80% completion level, but it's a wholly unsatisfying final boss fight and ending. Longtime Castlevania fans know that there's almost always multiple endings depending on what items you wear at specific times, or how you handle certain boss fights. Dawn of Sorrow is no different. While the 'bad ending' gives you one lackluster final boss, the good one will give you at least three more superb boss battles to end the game. By completing a certain objective, you can unlock "Julius mode", which allows you to play through the entire game as a combination of Julius Belmont and a girl named Yoko. Julius wields a whip, while Yoko uses a short knife. This mode throws out the entire pause menu from the main game, meaning there is no souls or items to equip. It becomes a purely action game, but it's certainly reason enough to play through at least one more time.

Dawn of Sorrow is easily the best looking Castlevania game to date. The backgrounds are extremely detailed and interesting, and every one of the enemies is animated perfectly. The music and sound effects are on par with Symphony of the Night, and every single sword slash and song sounds beautiful coming out of the DS speakers.

While it doesn't utilize the touch screen much (other than magic seals, summons, and an ability that allows you to break ice blocks), it doesn't really matter. I'm glad the game didn't rely too heavily on touch gimmicks just because it's on the DS. The best use of the hardware is the fact that the map is constantly displayed on the top screen, which is extremely useful. It may be fairly short, but every single second is highly enjoyable. In order to fully 100% the game, you must explore every single room and collect every last soul, so there's plenty to keep you busy. If you own a Nintendo DS, you absolutely must buy Castlevania: Dawn of Sorrow.