Splinter Cell this is not

While I've never been a big fan of the Splinter Cell series, I always admired its technical excellence, solid controls, and open-ended gameplay. Cold War is Splinter Cell, only with all three of those elements omitted. Plus, you get to play as an effeminate journalist rather than a military badass. Gamers should be lining up for this one, eh?

One of the first things you'll notice is that Matt Carter (your boring, annoying protagonist) must have some sort of debilitating leg injury, because he runs about as fast as Victoria Jackson on Celebrity Fit Club. Even with the analog stick fully tilted in the up position, it feels like Matt is trudging through knee-deep molasses. Obviously, this can be seriously annoying in a stealth game, because you're required to get out of the enemies' line of sight quite frequently. Enemy AI is extremely inconsistent as well. On some occasions, they'll spot you or one of your traps immediately. Other times, they'll wait until they're 2 feet away until they react at all.

The game controls almost exactly like Splinter Cell, almost down to the button. Don't expect to be doing any fancy Sam Fisher moves like the split jump, considering Matt is only a journalist. Regardless, he's apparently had some sort of weapons training, because he can be fairly accurate with a pistol. This pistol is only armed with rubber bullets, and any other form of taking out enemies is similarly non-fatal. You can hit them in the back of the head, use ether-soaked rags, and make ether mines, among other attacks. There is a very MacGyver-esque system in place for creating items. Matt will find items like bottles, cans, and alarm clocks, and manage to turn them into useful tools for taking out those dastardly Russkies. Cutscenes occur semi-frequently, which is a shame considering their level of quality. The story involves Matt trying to get a huge story by snapping photos of the President of the US meeting with the head of the KGB. Cutscenes feature generic voice acting and a very, very uninteresting story. 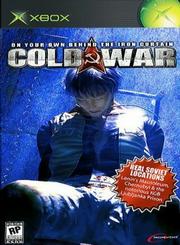 Innovation is almost nowhere to be seen in Cold War, but the closest it comes is the inclusion of an X-ray camera. It has multiple uses, and can be used to shut down security devices and see through walls. While it may be an item that hasn't really been seen in any other titles, that doesn't make it fun to use.

Graphics in Cold War are, in a word, terrible. Everything from the textures to the characters looks downright muddy and bland. There's also a large amount of 'jaggies' that we're somewhat used to seeing on the PS2, but not so much on the Xbox. All audio is generic and unmemorable. Sound effects are muffled, guards repeat the same phrases time and time again, and the music offers nothing of any value.

The only saving grace of Cold War is the bargain price tag. Even so, why play this mess when you could pick up a used copy of Pandora Tomorrow or Snake Eater if you're looking for some solid and cheap stealth gameplay? While it may be an idea with some potential (controlling an 'average guy' thrown into an action-filled situation), the execution was truly awful.