The Lunar series has been in the video game biz for quite some time and has established itself as one of the top-tiered RPG's. The game has never been a complicated RPG, but that is one of the main appeals of it. It's able to keep things respectably simple and yet still entertain us with its inspiring characters and epic story of saving the world. While Dragon Song does include both of these, it's the awkward mechanics of the gameplay that will hinder your experience. Jian Campbell is our heroine along side Lucia who is his best friend. The two work for a courier company when one day they receive one delivery that takes them on an unexpected journey.

Interfaces make up a large part of whether an RPG is good or not. Supposedly this was an area the DS would be able to handle better than regular consoles because of the two screens. The problem is that Lunar doesn't show any real reason why the two screens are better than one. Even though the menus and options for battle and world travel are laid out nice, there's no real impressive use of the two screens or the touch pad for that matter. In fact, I had the stylus holstered up for the entire time I played and just used the D-pad to navigate. Even though the lack of creativity and use of the DS's featured hardware shouldn't effect whether the game is good or not, it still lingers in my head that the first major RPG to come out on the DS could have easily been recreated for the GBA. 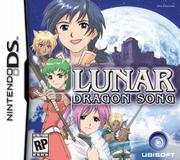 You'll be traveling the continent of Caldor to start which is where Port Searis, the heroines' hometown, is located. For traveling in a town or the overworld, you'll move around by selecting where you want to go and you will be instantly there. So to go from Port Searis to Thieves' Woods, one simply needs to select Thieves' Woods on the map. When you enter a town, you'll again be able to instantly go anywhere you want again. The bottom screen will have the selection of different places you can visit, while the top screen shows you where they are. When you reach a specific area such as an item shop or the inn, that's when the general isometric view comes in and you'll be in control of your character's movements. This makes traveling quick and easier. There is one downside to having this instant teleporting travel style. For some reason the developers thought that by not allowing running it would provide balance in traveling. Instead it's more of an annoying drag the entire way. In actuality you can run, but at the cost of health, which basically negates anyone from running around. It may even out traveling in the overworld, but when you are in dungeons it makes things go real slow and really gets on your nerves when you need to backtrack. I understand why this was done, but in the end it just causes more frustration than balance. 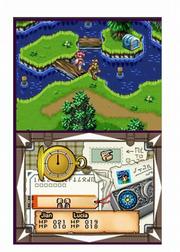 That's really the main theme of Lunar. In almost every category of the game, there's some confusing decision in the gameplay that leaves me wondering if they were actually trying to annoy the gamer. This leads right into the battle mode. Lunar doesn't feature random fights. You'll be able to see your enemy on the screen and avoid them if you can. Battles are rather simple and never get too complicated, as it's a simple matter of attacking and then healing. Something that I found to be quite insane is the inability to select which enemy you will attack. This was not a problem in the beginning, but as you start to face more difficult mobs, attacking in certain order becomes very useful and Lunar doesn't allow this. The computer will systematically pick the order of which enemy is attacked. The only abilities you can pick your target are with heals and buffs. Why this was done I have no idea. On another note, the game makes a very lame attempt to make use of the DS's unique abilities by allowing you to escape from battle by yelling into the mic.

Leveling is another process that has questionable logics. You can fight enemies either in combat mode or virtue mode. In combat mode, when you defeat enemies you only receive items and cards (will be talked about later). The only way to receive experience for your battles is by fighting in virtue mode. This is a mode that allows you to fight while worshipping the Goddess Althena. As you worship her you receive Althena Conduct, which is experience points. Also, in Virtue Mode, you are able to clear areas of mobs without respawning by finishing an area within a certain amount of time. So the game makes you decide on either leveling or collecting items, whereas in most RPG's both are done at the same time. The only reason I can come up with as to why this is implemented is because it lengthens the game. No matter its purpose, it's still a very confusing decision. 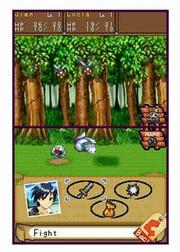 As mentioned, cards will be picked up off enemies during the journey. Each different enemy has it's own card which when you pick up, will be able to use a special ability on the card. Card abilities will range from regenerating mana while walking or guaranteeing an escape from battle. These cards have a certain amount of charge on them so they have a limit on their use, but you'll be able to get the card back by killing that specific enemy again and hoping he drops it. The cards are nice but the way they are used is another weary aspect of the game. It's very evident that some cards should be passive. What this means is that if you have the card in your inventory, its ability should be activated. Instead Lunar forces you to select and use the card. One example is the card that prevents items from getting stolen from you in battle. You'll need to use one of your character's turns to use the card and in the end it almost doesn't even make it worth using. This in turn makes most of the cards useless and you'll end up only using the healing and mana regeneration ones.

Like I said earlier, the game could have been redone on the GBA quite easily. Most the game is simply 2D SNES style graphics. When in battle, the game actually does a decent job of simulating a 3D environment by rotating a prerendered background layered underneath the sprites of the characters. I enjoyed it but I have a feeling the DS can produce more. The music is very light-hearted and any game that has a Sound Test within its options menus gets a smile from me.

There are just some baffling design decisions which ultimately hurt the gameplay. While the story and characters keep the game flowing, it's not enough to overlook the fundamental RPG mechanics that are awkwardly done. I'd also like to see more effort put into utilizing the DS's features. Yelling into the mic to escape battles is not what I envisioned. It's a mediocre RPG and a very disappointing DS RPG.