Use: Your thumb instead of the stylus

It seems like forever since we've heard anything about a Metroid game for the DS. Hunters is almost here, but in the meantime Nintendo brings us a Metroid-themed pinball game. Although it may sound a little ridiculous, the special twists and good use of the hardware makes Metroid Prime Pinball a worthy addition to the growing DS library.

Developer Fuse wants to make the pinball atmosphere as legitimate as possible. Included in the box is a rumble pack that's inserted in the GBA slot that reacts fairly well to re-create a real pinball atmosphere. Although there are more buttons to use, the L and R shoulder buttons can be more appropriately used as the flipper buttons. The game uses both screens to further simulate the correct pinball machine ratio. Finally, rubbing your finger across the touch pad will nudge or tilt the table to move the ball in the direction you choose.

All of these elements work together surprisingly well, setting you up with a solid start. Multiballs, locks, ramps and special areas abound. But it doesn't stop there. To break the normal pinball mold, Samus doesn't stay in her ball all the time. You can use bombs, acquire power bombs and missiles to blow away metroids, parasites and other familiar baddies as they infect the table. As you progress, you will encounter some fun, but easy boss battles as well. 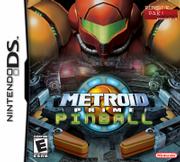 At the onset, the Pirate Frigate and Tallon Overworld table are selectable. To gain more tables, you must play through Multi-Mission mode, collecting artifacts. Once you gain access to the Phendrana Drifts and Phazon Mines tables, collecting all the artifacts will open a special Artifact Temple which houses the final battle.

The pinball physics work really well and really get addicting. Although the main game can be completed in one sitting, it's more designed to keep coming back to and beating your high score. In this day and age, it's sort of risky to trade length for the hope that your title is good enough to warrant replaying, but Metroid Prime Pinball is that good. 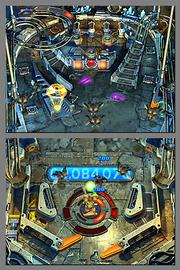 The wireless mode allows up to seven more people to connect and play only one table, with the main object being to get to the high score first. It's a pretty stripped down multiplayer component, but still manages to provide a nice break from the solid single player modes.

The graphics are some of the best the DS has ever seen. I felt like I was literally watching a Gamecube version of Prime from the top down. The colors are bright, vivid and smooth:a feast for the eyes. The sound is equally as impressive. Familiar Metroid Prime themes ring loud and clear, reproduced perfectly for the handheld.

Not expecting much, I was pleasantly surprised with how much fun was packed into the Metroid themed pinball package. If you're not a pinball enthusiast, your enjoyment may dissipate after a few hours, but you'd be hard-pressed not to glean some sort of enjoyment out of it.