Bad: Pseudo-familiar controls take some getting used to

Okay, I'll be honest. I've never been a big fan of EA's SSX series. From the debut of the first SSX as a PS2 launch game I've always filled my extreme sports need with Tony Hawk. So when Matt asked me to review SSX On Tour for the PSP I was a little reserved, but I accepted and I've got to say, I was pleasantly surprised.

For those like me that are new to the SSX series it breaks down as such: a racing game at its core, SSX games incorporate tricks and combos into the gameplay as a means of accruing more boost. Once you've maxed out your boost gauge you're able to perform Monster Tricks that grant larger point totals and again, more boost.

The game is divided over four distinct modes Tour, Practice, Challenge and Multiplayer. As you'd suspect, Tour is the game's main single player mode. In it, you choose a boarder, dress them up and hit the slopes. The goal of Tour mode is to advance up the leader board until you're an SSX On Tour Legend. Compelling. 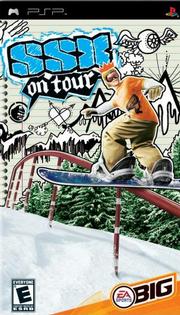 Gameplay is spread out over seven series. They run the gamut of events in the series from BigAir to Board Races. Each series is divided up into six stages. The first four can be completed in any order. The final two are tournaments. There are four series available at the outset. The final two are unlocked through completing series challenges and picking up gold medals.

Also new is the Challenge mode. As the name implies, Challenge mode is a number of objectives that test a wide array of shredding (snowboarding and skiing) skills. Early challenges are simple (jump through two hoops), while later challenges ask for high scores or for you to make your way down the mountain on one continuous combo.

Completing tour objectives and Challenge goals get you a variety of things including new equipment, stat points and advancement on the leader boards. Aside from Challenge and Tour modes other new features include On Tour moves and the addition of skiing. On Tour moves replace the Uber Tricks of the previous SSX titles. In compensation of the PSP's lack of a right analog stick On Tour tricks are accomplished by holding the L trigger in conjunction with one of the face buttons.

Skiing is very similar to snowboarding except that you still have control over your character while you're preloading a jump (think Tony Hawk). Landing is even easier on skis than it is on a snowboard since your character can ski just as easily backwards as they can forwards.

SSX: On Tour isn't a direct port of its Playstation brother, but it comes close. The soundtrack and goofy menu and load screens are intact. As is the fast frame rate and many of the textures and particle effects. The game runs smoothly even when there are a lot of racers on the screen at the same time. Unfortunately the visuals suffer from some pixilation.

The control from the series also survives the miniaturization process. If you're a fan of the series this is a good thing, but if you're new like me it seems pretty floaty and a little unresponsive, namely when you're trying to chain tricks together in the air.

Missing from the PSP version is the create-a-player mode. At the beginning you're allowed to pick a player and choose their gear, but that's hardly customizing, at least by today's standards.

On the whole SSX On Tour gets the job done. It's lightweight and accessible enough for the casual gamer, but there's still enough complexity in the combo system and difficulty in the later challengers and On Tour series to keep the hardcore gamers happy too.

Extreme sports games are usually a dime a dozen, but the SSX series has stood out both critically and commercially. This one is no different, but for those of us who like our extreme sports on solid ground: Tony Hawk's American Wasteland might suffice.