Silly veteran, "Mix" is for kids! 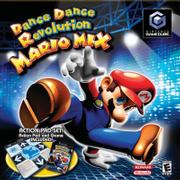 Good: Fun for families and straight up, dorky goofballs

Bad: Doesn't live up to other DDR's, lacking the trademark energy

Nintendo has been licensing the use of their main characters a lot lately and their newest fusion is with DDR. I'm very proud to say that I love DDR not just for its fun 'dancing' but also for the music. It's not necessarily something I'd go buy on CD, but it's fun and entertaining. So you can imagine how excited I was to finally get my hands on DDR Mario Mix. Does the game live up to its DDR predecessors or is this another wasted milking of the Mario franchise?

DDR MM is not what I expected. I hate to use the wording but there's no other possible word usage that could better describe how this game is: kiddy. This is not your standard DDR. Everything is simplified down and the songs are just plain horrible. Most of the songs you'll dance to have a very light-hearted techno beat and usually end up being a remix of some kid's song. I'm not joking either, the first song danced to is a rendition of 'Twinkle, Twinkle, Little Star". I'm usually against critics knocking a game down because it appears kiddy, but this was just too much. There are plenty of redone Mario songs, but they too have the kiddy feel as well. The original songs made for the game are weak as well. It was disappointing to find only one song with words and the lack of poppy techno beats and a bit of house hip-hop that usually comes with DDR just weren't there.

The game is easier too. The hardest mode in DDR MM is about the same difficulty as standard mode in the regular ones. It's a bit annoying because the game requires you to unlock every song before you can free play them. Because I had to do the songs first in story mode, I was only able to play them on normal difficulty setting which is ridiculously easy. Not only did they cut down on the difficulty, but there aren't nearly as many songs as there were in the other DDR's.

The story mode is another sign that that game was made for a very young audience. You can't skip any text or cutscenes. Instead of just being able to play songs, you have to sit through what could possibly be the lamest Mario story of all-time. Essentially, Bowser has stolen music keys and you are after them. As troubles interrupt your journey, the only way to stop any of them is to:dance. The story and cutscenes also lack the regular Mario humor found in other Mario games like Mario Kart or Mario Tennis. Although, I have to admit, seeing Waluigi dancing around made me chuckle now and then.

This is also where Mush Mode is implemented and introduced. Mush Mode is a DDR MM exclusive and it's a way to involve the classic Mario enemies into the dancing. A couple examples are that goombas will come up the arrow paths and just like the arrows you'll have to stop them or they will drastically take a large amount of your dance (health) meter away. Another example is how the game uses them in boss battles. One of the earlier boss fights you come across will have you knocking back a fireball to the boss by stepping on it at the right time. If you miss you end up taking the damage and not the boss. There are other quirky Mush Mode scenarios and they were actually a pleasant addition to the game.

You'll also be able to participate in mini-games after you unlock them in story mode. These will consist of very simple games where you are required to dodge objects or gather them, rapidly stomp your feet, and even go through a side scrolling platform stage. All the controls are done with your feet. They provide a change of pace in between songs and like Mush Mode, are a welcome addition.

DDR MM is probably the biggest disappointment of 2005 for me so far. It's basically a dumbed-down version. I was really upset to see how random roulette and double pad dancing were absent also. DDR MM doesn't provide much of a DDR challenge, but it still provides a bit of fun for the right mood and audience. Even as much as I disliked the game, this is still a gem for younger kids who are looking to get into DDR.