The kick-off slogan is as much a part of American pop culture as "Gentlemen, start your engines" and "Are you ready to rumble?"

Jason Sudeikis gets to live, work and breathe that phrase - and potentially utter it at the beginning of a telecast of "Saturday Night Live." This year the Shawnee Mission West grad and diehard Kansas Jayhawks fan has advanced from writer to featured player on the iconic comedy series.

"I feel like nobody notices me yet," Sudeikis confesses.

He may think that, but it took him only until the second show to score a markedly high-profile gig. He got to parody the titular character from "Napoleon Dynamite" during Heder's monologue.

"That was cool because I wrote that one," Sudeikis says. "But the neatest thing - and as geeky as this sounds - Jon Heder let me wear his real Napoleon Dynamite glasses. He was like, 'If you're going to play Napoleon, you should have his real glasses.' I was so protective because I had a super-quick change and had to whip off these glasses. You would think it was the Shroud of Turin."

Sudeikis is now working frantically in preparation for Saturday's show, hosted by Lance Armstrong with musical guest Sheryl Crow. Although relatively new to the on-camera element of the production, he has spent two years as a writer for the series and is getting comfortable with the breakneck pace with which an episode develops. 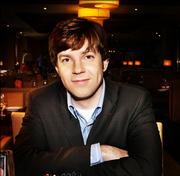 Jason Sudeikis, a native of Overland Park and long-time Jayhawks fan, has become a featured player on this season's cast of "Saturday Night Live."

He explains, "Monday we talk about it. Tuesday we write it. Wednesday we read it. Thursday we rewrite it. Friday we block it. Saturday we do it."

On this particular Tuesday, Sudeikis is getting ready to meet with the other writers at 4 p.m. and expects to stay up honing the scripts until 8 a.m. Yet he believes it isn't just the up-to-the-minute freshness of the material that makes "SNL" so challenging - and so rewarding - so much as it is the show's diversity.

"Before it's a skit show, I truly believe it's a variety show," he says. "There is a lot of variety in its content and its type of humor. Obviously, there's a lot of variety in the cast and in the music that is played. It definitely holds up on that end of the bargain."

The sport of comedy

Sudeikis returned to Overland Park two weeks ago to celebrate with two other friends who also were turning 30. (Both he and "Saturday Night Live" were born in 1975.)

It was in Kansas City where he first became actively involved with improvisational comedy.

After graduating from SM West in 1994, he headed to Fort Scott Community College on a basketball scholarship. On weekends he'd drive the 75-mile commute back to K.C. to attend classes at ComedySportz.

Two years later, he was cut from the basketball team because of failing grades and decided to focus on his newfound interest. (He says the only time he plays basketball any more is every Friday when he and "SNL" castmate Kenan Thompson challenge each other on Xbox.)

He gathered a group of ComedySportz veterans and set up shop at Lawrence's Java Break, 17 E. Seventh St.

"We did between 10 and 15 shows, and I do remember it getting really exciting when around 20 people were there," he says. "I wish I could tell you we built up an empire and eventually moved to a bigger coffeehouse. But it was literally just us trying to figure stuff out."

In 1997, Sudeikis moved to Chicago and became part of the eminent improvisation troupe Second City. Then it was on to the group's Las Vegas edition of SC that holds residence at The Flamingo. He also married Kay Cannon, a fellow improv comedian who was part of the Vegas cast.

His transition to "SNL" was aided by his uncle, Second City alumnus and former "Cheers" star George Wendt.

"His advice was pretty simple," Sudeikis says. "It was, 'Get on the biggest sitcom ever and then just go from there.' (laughs)

"(My uncle) was always very encouraging. Because of him, I was aware of a place like Second City. And because of him it made me aware that you could actually do this and be successful. It allowed me to take the path less traveled in my family."

Sudeikis' parents, Dan and Kathy Sudeikis, still live in the Kansas City area. His sister Kristen (a former KU Crimson Girl) works as a choreographer and dancer in New York. His youngest sister, Lindsay, is a nun who resides in Rome.

While Sudeikis splits his time between New York and Los Angeles (where wife Kay lives), he is constantly running into fellow Kansans in the industry.

"Rob Riggle was a cast member last year," he mentions. "He went to (Shawnee Mission) South and to KU. I've met Paul Rudd a couple times. I always feel like a goofball, because I always say, 'Hey, we went to the same high school.'"

Not surprisingly, Sudeikis has attempted to embrace his Kansas roots rather than downplay them. Two years ago, he wrote an "SNL" sketch for host Jack Black that was set at Lawrence bar The Wheel. It was the first of many pieces he would pitch that had a KU-themed connection.

"I remember last time we spoke (in 2003) I promised I'd try and get the '88 Jayhawks into a sketch," he says. "I know I have, but they've only made it as far as that Wednesday read. It doesn't mean they won't pop up again, because you can always throw Jeff Gueldner in there."

But even if his beloved 'Hawks don't make it directly into sketches, he's found an even subtler method to ensure they are part of every show.

"On Saturday we have to do a bunch of quick changes during the day," he explains. "My buddy Horatio (Sanz) has the habit of wearing shorts the whole day - these green with polka dots shorts. I thought, 'That looks really comfortable.' You don't have to keep changing out of jeans or Army fatigues depending on what your next character is if you're waiting around. So I wear my KU basketball shorts. I had them on at 'goodnights' last Saturday.