How does Nintendo's virtual pet fare?

Out of all of the great offerings the DS has coming up in the next few months, Nintendo has been talking about Nintendogs the most. It was a huge part of their E3 presentation, and has been touted as another game that utilizes the unique hardware of the DS to its full potential. This statement is unquestionably true, as the only real forms of input are the stylus and voice recognition - features unique to the system. The experience may be original, interesting, and something to show to your friends, but does the fun last?

You start by visiting the kennel and selecting through six breeds of dogs, which vary depending on which of the three cartridges you chose. After looking through all of them, I brought home a shetland sheepdog which I named Ringo. The dogs react realistically when you first introduce them to their new environment. They curiously sneak around, sniffing and exploring their new surroundings. After naming them, they'll react when you call them and run up to the camera to play. All you can really do right away is pet them, rub their stomachs, and other basic motions with the stylus. Once the dog is ready to learn, you can teach them certain tricks by initializing it with the stylus, then giving it a voice tag. For instance, to get the dog to sit, you rub its head and then move the stylus down. Once he's done that, you assign the phrase "Sit down" to this motion. After three or four times of hearing this phrase, you won't have to use the stylus anymore to get the dog to sit. 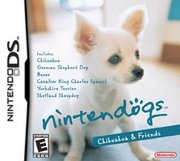 The game runs off the internal clock in the same manner as Animal Crossing. Meaning, if it's daytime in the real world, it's daytime in the game,. If you try to teach your dog too many tricks in one day, it'll get tired of learning and you'll have to wait another day before continuing. It can learn most tricks that dogs generally perform, such as Sit Down, Lay Down, Shake, Roll Over, Spin, and Beg, among others. These are the basic tricks that the game explains to you. There are other tricks that you can teach the dog, but they're fairly ambiguous. At times, a lightbulb will pop up (signifying that the dog has performed a new trick), but it won't make it clear what exactly the trick was.

These tricks aren't just for show, they can earn you money. One of the three competitions is based on obedience. You'll be given a time limit and a short list of tricks to perform. After a few rounds of this, your dog receives a score from the judges and prize money is awarded appropriately. As you win competitions, you'll move up class levels and compete for more money. 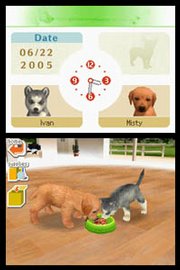 It's recommended that you walk your dog at least once a day. When you choose to do this, the game makes you draw a path around the neighborhood with the stylus. You're given a "stamina meter" that lets you know how far the dog can walk without getting tired. There are question marks spread around the neighborhood, and they usually yield one of two results. More often than not, it's one of your neighbor dogs. Your dog will play around with it for a while, and it gives you a chance to get some friendly advice from the dog's owner. The other result of a question mark is usually a wrapped gift laying on the sidewalk. Your dog will bring it up to you, and it's generally something goofy like a tissue box, a boot, a disposable camera, or a juice bottle. On occasion, you'll get something fairly useful, like a new soccer ball or frisbee. If you want to teach your dog to catch a frisbee, the best place to go is the park. Teaching your dog this skill is crucial to winning one of the other competitions, the Disc Catch. This is my favorite of the three competitions, and predictably tests your dog's ability to catch a frisbee (as well as your ability to throw it). There is also an Agility competition, but it's fairly weak. All you have to do is make your dog jump over bars and go through tunnels as quickly as possible, and it's not very interesting.

While it's possible to win money, there's not that much to do with it. You can choose from a small set of different interiors for your house, buy dog care items, or get some accessories for your pet. None of these are particularly entertaining or important to the game (with the exception of dog food and water). The best thing you can do with this cash is buy new dogs. You can own up to three dogs, and they'll interact with each other realistically once they're all under one roof. 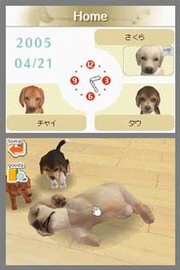 There is something called "Bark Mode" which ideally connects you with other owners of the game, in hopes of your dogs interacting. Putting your DS in "Bark Mode" will essentially put it in sleep mode, but your system will interact with others within a 100-foot radius that are also in this mode. It's a decent enough idea, but I've yet to find anyone else in this mode, and I've walked around campus and downtown several times hoping to try it out.

The dogs themselves look and act extremely realistically, and might be the best looking graphics yet on the DS. All of the animations transition extremely well from motion to motion. Backgrounds are fairly simple, but they look good. Sound effects are sparse, and are basically limited to barks, ball bounces, and cheers during competitions.

While it's an extremely novel idea, and a good use of the hardware, Nintendogs ultimately gets old within a few days. There's just not enough to do to keep the player's attention. Once you've taught it all of the tricks, it's pretty much the same procedure every day: pet it a bit, toss a ball at it, feed and water it, take it on a walk, then enter it in a competition. You can only do three competitions a day, so you're even limited in that regard. Nintendogs is something fun to show to your friends, and possibly pick up and play with every once in a while, but there's simply not enough to do to make it a AAA title.

so for bark mode to work, you need to find someone else who actually bought a ds? by that time, your chihuahua might be too old to play. might make a nice snack for rottweiler and friends though.