The 48-year-old vaudeville entertainer from Lawrence would rather make a living from his other professional skills - juggling, stilt walking, slapstick pantomime and various other circus arts - but the bottom line is amusing his clients. And if it amuses them to see a human being shove a flaming torch down his throat, well, Renner's ready with the lighter.

For the past 20 years, Renner has supported himself as a vaudeville and street entertainer, performing at county fairs, private parties and other venues. Three or four months of the year he spends on the road, plying his trade in places like Ogalalla, Neb., DuQuoin, Ill., New York City and Guanajuato, Mexico.

When he tells people about his occupation, they usually say, "That's great. What do you for money?"

He's quick with a response: "I make a living. Not a killing, but a living."

Had the 1981 Kansas University graduate stuck with his first major, electrical engineering, he might be nearer the killing end of the financial spectrum. And he'd be miserable, too. His flirtation with white-collar respectability lasted a semester, he said, before he plunged headlong into the world he had loved since childhood: showbiz. 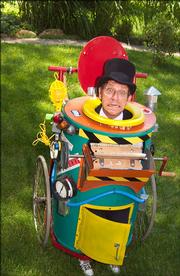 Richard Renner, seen performing in his "Recyclinator," a gadget he uses to teach children about recycling, makes his living as a vaudeville artist.

His early influences included his grandfather, who was a farmer and Renner's surrogate father after his parents divorced. Grandpa was always the life of the party, the guy with a joke, the one you could count on to defuse a tense situation with a side-splitting remark.

Then there was "Animal Crackers," the 1930 Marx Brothers film that made Renner walk around for "several years during childhood" mimicking the mustachioed, wise-cracking Groucho Marx. Before that, there was a "Jerry Lewis" phase, during which he tried to master the high art of funny faces and falling down - often, he admits, to the great annoyance of family and friends.

Renner's short-lived engineering career was not in vain. He now makes many of the props for his shows, including a a big gadget he calls the Recyclinator, a jack-in-the-box contraption designed to teach kids the wisdom - and joy - of inventing new uses for old junk.

Renner's one-man business is called the Vodvill Entertainment Co. Why the weird spelling? "So it'll fit on my license tag."

When Cathy Moreland was a child, she loved horses so much, she always wished for a pony for Christmas.

That wish never came true, but Moreland is now working at her dream job as a certified equine massage therapist.

"People ask me if I'm a horse whisperer, and I tell them, no, I'm a horse listener," Moreland said.

As she works on a horse's muscles, she is constantly aware of the animal's moods and needs, she said.

She was trained at the Western Montana School of Equine Massage in Hamilton, Mont., where she learned about equine accupressure and how to massage around "energy meridians."

Back in Lawrence, she works three days a week for Adams Chiropractic, and then the remainder of the week she travels in an approximately 100-mile radius, visiting barns, farms and stables to massage horses.

She calms the animals down, using aromatherapy and lavender oil.

"I've had a couple of horses fall asleep, they get so relaxed," she said.

The massage usually lasts about an hour and a half, she said.

Moreland found her highly specialized field of work by searching the Internet.

She had a degree in kinesiology, and had been a certified athletic trainer, working at one time with the Kansas State University football and tennis teams.

But later on, she was employed out of her field as an information specialist for the parking department at Kansas University.

That's when she found the Montana school on the web.

She said horses are extremely spiritual animals, and because of their size, it takes more muscle power to give them a massage.

She joked, however, that horses and football players have a lot of similarities.

"They both suffer a lot of leg and back injuries," she said.

Shawn Ball's customers are trashing his business. And he couldn't be happier.

Ball, 37, owns S.M. Waste Disposal, a trash-hauling company that serves most of Jefferson County and, in Douglas County, the Lecompton area.

Shawn Ball bought a trash route and a jalopy truck from a neighbor when he was 22. His business, S.M. Ball Waste Disposal Service, has since grown to serve large parts of Jefferson and Douglas counties.

"I got started when I was 22 years old," he said. "I bought the route from a neighbor who had the contract for the city of Lecompton and some of the rural area. Another neighbor loaned me the money to buy the contract."

A truck came with the deal, but it was "pretty much junk," he said.

Over the next 15 years, Ball's routes grew to include Perry, Ozawkie, Meriden, Winchester, Oskaloosa, Nortonville and the surrounding countrysides.

"We pick up for about 600 rural customers," he said. "But I don't look at them as customers. They're friends.

"It's like I tell my kids - figure out what you're good at and then figure out how to make money doing it," he said, chuckling at the thought of a trash hauler spouting philosophy.

"But you know what? Every morning I thank the good Lord for letting me get up and enjoy what I do," he said. "If I worked just to make money, I'd be miserable."

Just last week, one of Ball's customers fixed lunch for him and a co-worker.

"She left us a note to let us know it was there on the picnic table for us," Ball said. "She knew about when we'd be there so it was still warm."

Ball said he treats his four employees like his customers.

"I learned a long time ago that if you take care of the people who work for you, they'll take care of you," he said.

Chris Zacharias has been with Ball since 1998.

Second in seniority is John Hazlett.

James "Toby" Zacharias and Allen Shaver have been with Ball for three and two years, respectively. "Toby's real fast, he has a lot of energy," Ball said. "Allen's real personable. He's good with customers."

Ball added, "It's like we're all one big family."

Making Braille music for the blind

In her short experience in the working world, 18-year-old Juliann Howat can already lay claim to having an unusual job.

The freshman at Kansas University, who hails from Lawrence, scans sheet music in a computer, edits it and prints it in Braille.

The music is used by a blind student for her music classes. By reading the lyrics and music in Braille, the student is able to tell which notes go with which words.

Juliann Howat, a Kansas University freshman, retrieves a document from a Braille printer. Howat works at KU to help translate music into Braille.

"It's nice to have a job that has a lot of emotional benefit," Howat said.

"If I were not here to do this, it would be a lot harder for her to get through college," she said.

Howat works for Disability Resources at KU, which provides assistance to students with disabilities. The office serves approximately 650 students and protects students' confidentiality.

She has worked there since June after having received a federal work-study grant. She applied for the job after an online search.

A Free State High School graduate, her prior work experience was as a car-hop at Sonic Drive-In.

Now, Howat works part-time, squeezing in hours between classes from 8 a.m. to 5 p.m., Monday through Friday. She also is committing a music textbook to Braille.

She said while the work is satisfying, she doesn't believe it will alter her career path, which is to eventually major in accounting.

But, she added, "The people in my office said I may be able to get certified as a music to Braille transcriptionist. There aren't many of those in Kansas," she said.