Remember the excitement you felt the first time you laid eyes on Pac-Man in your local arcade? How about the exhilaration of taking the checkered flag in Pole Position or the thrill of facing down an armada of alien spacecraft in Galaga? Yeah, me neither.

Luckily for those of us who can recall the glory days of the arcade Namco has released a new compilation of 16 old school games, appropriately titled Namco Museum: 50th Anniversary.

The game embraces the 80s style from which the 16 titles originate. The main menu interface is composed of the original arcade cabinets for each game. While making your selection authentic 80s jams from groups like Dexy's Midnight Runners and Loverboy can be heard in the background.

The games themselves are all in their original form, which is great considering recent collections from other developers have actually gone back and remade or retooled their classics (Read: Sega). 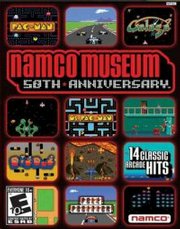 As for the games themselves of the 16 titles featured only three have not been released on a previous Namco collection. That being said, Pac-Man and Ms. Pac-Man are just as engaging as ever.

Other gems Museum has to offer include Rolling Thunder, a fluidly animated action side scroller in which you fight legions of clone soldiers with only pistol and machine gun, the super-addictive puzzler Dig Dug, the early F-1 racer Pole Position, and some cool top down shooters like Galaga and Xevious.

Unfortunately those games account for less than half of the game's catalog and the rest lack the innovation of the previously mentioned titles. Many of the other titles are rehashes, sequels, or minor improvements on other games within the collection. Dragon Spirit, for example, is basically Xevious with well, dragons and Galaxian is just a full color version of Galaga. 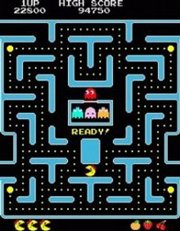 Many of these second tier games are included for their historical significance, not that you'd know that from anything on the disc or even within the manual. The game is rather devoid of any type of Making-of featurettes or developer interviews, something Midway has been very good about including on their compilation discs. The only special features Namco Museum contain are two secret games: Galaga '88 and Pacmania.

The inclusion of collection specific features is a very significant factor for a game, especially since after you've unlocked the two games and set the high scores there really isn't any other reason to keep playing except for its novelty value. The bonus content makes the difference between paying for a videogame or downloading an emulator 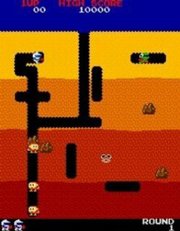 That's the biggest problem with Namco Museum 50th Anniversary: aside from the legal ramifications, there really isn't any difference between the game and an emulator. Now to be clear, I'm not advocating the illegal use of an emulator, I'm merely saying that using an ROM emulator or dropping 20 dollars on the game will yield the exact same result.

For those of us infected with nostalgia (and nowadays, who isn't) the vintage arcade feel of Namco Museum 50th Anniversary is very charming. The old school feel will definitely mesh with the trucker-hat, I love the 80s watching pseudo-vintage 20 some things as well.

As for the games themselves, some of them are hits some simply are not. If anything these retro games prove that regardless of processor speed, polys per second, and online play modes the underlying theme for any game worth mentioning is that it is fun to play. The games on this disc that are still significant do that.