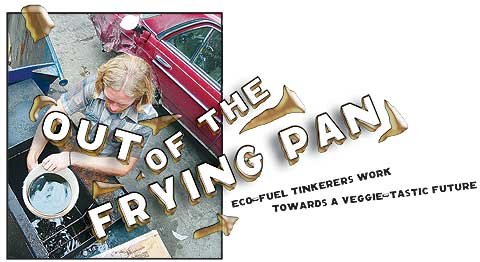 In his ongoing quest to usurp the petroleum-slathered man, Andrew Roberts isn't afraid to get his hands dirty.

About twice a week, Roberts' peanut-oil-powered 1979 Mercedes breaks down in the middle of the street. He's learned to take backroads to ease the embarrassment, but he still frequently depends on the kindness of strangers to push him out of the way.

"Twenty minutes in the middle of Iowa St. with a hand pump to prime all the lines - that sucks, for sure," says Roberts, 22. "I guess that's proof that I don't really know what I'm doing."

But actually, Roberts has figured out how to do something that most people probably don't even know is possible.

He's converted his car to run almost entirely off the grease left over from a deep fat fryer.

Roberts spent about $200 and 30 hours converting his car to run on waste vegetable oils. His primary fuel is discarded Free State Brewery kitchen grease, which he scoops out of an alley refuse container and filters into two tanks.

Andrew Roberts in the 1979 Mercedes-Benz he's converted to use waste grease from local restaurants. His bike is used in the event of engine failure.

Roberts has his doubts about the process' long-term effects on his car, but considering his investment, he's not too concerned.

"I'm really losing nothing, except for some time maybe," he says. "This winter, when I have to get up an hour before I have to leave and go and prime my hand pump and heat up my tanks ... then it'll really suck. But if gas is $5.00 a gallon by then, that'll help."

Eco-fuel tinkerers like Roberts represent a renegade segment of the alternative fuel revolution. Their systems aren't perfect (Roberts' car still requires petroleum diesel to start and stop the engine), but they do achieve Rudolf Diesel's original vision of a car that runs on plant oils - almost a century after cheap petroleum swept that vision under the proverbial rug.

To see Roberts' car in action, it's easy to wonder why the entire country isn't running on vegetable oil yet. Though that prospect may seem highly improbable given the economic and political power of oil companies, plant-based fuels are steadily becoming more practical thanks to chemists, vehicle manufacturers and tax incentives.

Andrew Roberts uses a disposable filter to keep suspended debris in the kitchen grease out of his gas tank.

At the forefront of the eco-fuel movement is biodiesel, a clean-burning fuel produced from renewable resources like soybeans and animal fats. Biodiesel was initially used largely by farmers in the early '90s, says Kenlon Johannes, an administrator for the Kansas Soybean Association.

But, he said, it's recently caught on within the trucking industry and even begun to trickle down to passenger diesel cars thanks to "B5" and "B20" blends that mix biodiesel with traditional petroleum diesel (the number refers to the percentage of biodiesel).

Less than 5 percent of American consumers actually own diesel vehicles, making it cost-prohibitive for most gas stations to carry biodiesel at the pump. In Kansas, approximately 30 roadside gas stations carry biodiesel - a significant improvement over the six that carried it 18 months ago. 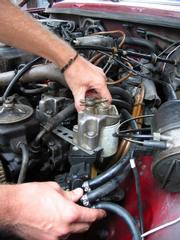 The main modification Roberts made to his Mercedes was to add a separate fuel pump for the kitchen grease (middle of photo) and a switch (bottom of photo) to toggle between the grease tank and the regular diesel tank, which he uses in colder weather until the engine is warm.

"It was not intended to get to the pump right away, and it was not intended for the general public right away," says Johannes, whose group lobbies to increase the profitability of Kansas soybean farmers. "On-road biodiesel is kind of a new thing that happened with the tax incentives."

The skyrocketing cost of petroleum has made biodiesel blends relatively more affordable than ever. As of Sept. 9, the nearest biodiesel retailer to Lawrence - Capital City Oil in Topeka - was charging $2.79 a gallon for traditional petroleum diesel, $2.80 for B5 and $2.84 for B20.

"It's where the market is headed, so we need to be ready," says Capital City Oil President Marvin Spees. "If everybody started using B20, theoretically we'd need 20 percent less foreign oil. It's not going to happen overnight, but this is darn sure a good start."

For Capital City Oil to put a retail biodeisel pump in Lawrence, Spees says, a major commercial client would have to approach his company.

"Some guy that burns 50 gallons a month - sure, everybody's important, but there are guys that burn a thousand gallons a day," Spees says. "Those are the people that we need to hear from."

Such a scenario would please the dickens out of Sarah Hill-Nelson, who has been hounding Spees about getting a pump in Lawrence ever since she invested $40,000 in a diesel 2003 Dodge Ram for The Bowersock Mills and Power Company. 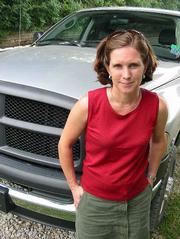 Sarah Hill-Nelson invested $40,000 in a diesel 2003 Dodge Ram that she hopes to run on biodiesel for The Bowersock Mills and Power Company. Her only obstacle to doing so now is the lack of a biodiesel filling station in Lawrence.

"We purposefully bought a truck with biodiesel in mind," says Hill-Nelson, the secretary-treasurer for the downtown hydroelectric plant. "We were really trying to do something environmentally responsible ... it was a big investment for us."

So far, Hill-Nelson has only had one opportunity to fill up with biodiesel - a chance encounter with a pump in Durango, Colorado. She looked into buying biodiesel in bulk, but city zoning restrictions nixed that idea. Her conversations with Spees led her to believe that Lawrence would soon have a roadside pump, but now she says "it's becoming increasingly clear" that that won't be happening anytime soon.

"Obviously we can't drive to Topeka to fill up," Hill-Nelson says. "We're just one truck, but I would think there are so many people in Lawrence that would be interested in this."

Proof in the pudding

Hill-Nelson's conjecture is supported by several local businesses that have invested in biodiesel, including Pine Family Farms and McPherson Wrecking. The latter recently used 100-percent biodiesel in its skid-loaders and excavators to knock out walls at Allen Fieldhouse and Hashinger Hall.

"You can't even tell they're running," says owner Kent McPherson. "You can hear 'em, but you don't get any of the diesel smell. I know our carbon monoxide is way down ... nobody says they're getting headaches anymore."

KU on Wheels tested B20 blends on two buses last fall, but progress has stalled on Student Senate's implementation of biodiesel on university buses. Representatives from the Senate's Transportation Board reported that the trial went smoothly, but the issue appears to be on the backburner while contract issues are sorted out. 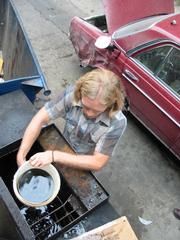 One critical voice who doesn't appear to be sold on biodiesel is Lawrence Bus Company Owner Wayne Popp, who expressed concerns about the fuel's tendency to gel in cold weather.

"With the University of Kansas, we have hills," Popp says. "Would you like to come out of GSP down 11th street with a load of students and have an air-pressure problem because of ice in the line? Those are considerations that everybody has to sit and look at."

Popp's concerns seem warranted given the fact that 100-percent biodiesel gels around 28 degrees Fahrenheit. According to the National Biodiesel Board, however, B20 gels at a similar temperature to #2 diesel.

Opinions also seem to differ when it comes to biodiesel's effects on car engines. One thing that's universally agreed upon is that biodiesel hates rubber, which means it's not compatible with most diesel engines that are more than a decade old. But many manufacturers of recent diesel cars are endorsing B5 to B20 blends. In Europe, where nearly 50 percent of passenger vehicles are diesel, biodiesel is the norm at diesel pumps.

Some of the myths surrounding biodiesel may result from people confusing it with straight vegetable oil, says Amber Thurlo Pearson, communications specialist for the National Biodiesel Board. Whereas veggie-oil renegades like Roberts must tinker with their cars to accommodate the fryer grease, most modern diesel engines readily accept biodiesel.

"For the most part we're dealing with a product that doesn't have negatives," Pearson says. "Big oil companies are somewhat receptive to biodiesel, because if they can partner with biodiesel companies that makes their image better."

Andrew Roberts demonstrates the harvesting of waste grease from local restaurants in order to use the grease to fuel his 1979 Mercedes-Benz. Play video

Bringing biodiesel to a wider population may be spurred on by a team of KU researchers at The Center for Environmentally Beneficial Catalysis. The group is working on a project to find cheap ways to refine cooking grease so it can be used in conventional biodiesel production processes.

Principal investigator Susan Stagg-Williams says the project's main goal is to provide an alternative to the expensive refining processes that dominate the biodiesel market.

"The biggest limiting factor right now is cost," says Stagg-Williams, an assistant professor of chemical and petroleum engineering. "There have been enough published advances out there to show me that what we're doing is possible. Whether or not it ever is truly the economic solution that people are looking for - that's going to be a question."

Stagg-Williams says that there probably aren't enough crops to satiate all of America's fuel needs. She views biodiesel as just one component of a larger plan to reduce our country's dependency on petroleum.

"I think what we're going to end up seeing is a bunch of different alternatives as opposed to one fixed alternative," Stagg-Williams says. "Biodiesel is not going to be the end-all solution, but I do think in terms of a supplement and some short-term help that it's possible."

If all goes well, Stagg-Williams envisions a day when KU students and faculty can re-use all the waste grease from university cafeterias.

"We'd turn around and make a biodiesel-grade fuel that then goes into the KU buses," she said. "It really is a closing of the loop."