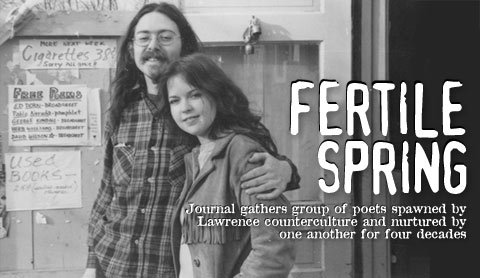 It was 1965. War protests and civil rights marches raged across the country. Artists were reacting to the turmoil with radical words and pictures.

And McCrary was stuck on the less-than-exciting campus of the University of Illinois at Urbana-Champaign.

A friend told him he should go to Lawrence, Kan.: "It's pretty cool."

He found it at a couple of bookstores just blocks from Kansas University, and he wasn't the only one. During the next 10 years, McCrary fell in with a coterie of writers, readers and publishers who shared his interest in language. John Moritz. Lee Chapman. Ken Irby. And later Judy Roitman, Maryrose Larkin and Jonathan Mayhew, among others.

"I was writing then, but it was pretty bad. You know how it is when you look at your old stuff," says McCrary, now 64 and working at Independence, Inc.

But whatever the quality of that original work, McCrary and his friends began a literary subcommunity that still thrives today. The latest edition of Black Spring is evidence of its health. The second issue of the New York-based journal gathers poems by Lawrence authors, pairing them with essays by Lawrence expats and others familiar with the writers' work.

It's published by Steve Tills, McCrary's buddy from his graduate school days at the Sonoma State University in California, who asked McCrary to select Lawrence poets for the collection. He assembled what he considers a like-minded group.

"I think we would agree that the main point of our poetry is not to tell a story or to evoke an emotion," McCrary says. "I do think there's a focus more on attention to language."

Roitman agrees. "I think all of us are trying to do things with language that it doesn't ordinarily do."

Diversity within
Aside from that common goal, however, the writers' styles diverge greatly. McCrary's stanzas are spare in words but, says John Fowler, rich in meaning nonetheless.

"The simplicity of language, the sparseness of the word on the page, the way a few words stretch my mind across big spaces - all this is here," Fowler writes in an essay for the online version of GRIST journal.

"I receive pleasure from using the most active words and the fewest number to impart what it is I'm trying to say," he says. "In one poem, I have one section that only has one word in it. There's one more step than that, and that's a blank page. But that leaves too much to the reader."

Jim McCrary, photographed with his dog Sarah, is one of a handful of local poets in the Lawrence issue of Black Spring. He came to the city in 1965 and fell in with a writing community that still thrives today.

Then there's Roitman, a KU math professor, who rarely lets a word stand alone on a line - at least not in Black Spring. These poems look like long paragraphs, and they benefit from the momentum of few line breaks.

"If you look at some of my stuff, the syntax is almost nonexistent," Roitman says. "You don't have normal sentences, and there's a reason for that because normal sentences can't do what I would like to do."

Roitman's work is difficult to characterize, says Lee Chapman, but it's magically alluring.

"The poetry comes out of her heart and soul, but once it's on the paper, there's a sense that she doesn't want to get murky. She doesn't want to beat people over the head with the personal. So you kind of have to hunt around.

"There are some poets, and I would say that Judy is one of them, who are more about the medium of poetry than about telling some kind of story or making some kind of point. And yet she's very engaging." 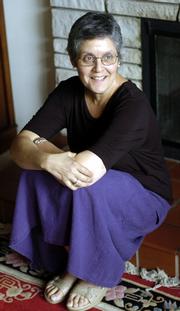 Judy Roitman is among the poets in Black Spring, a New York-based journal that has published a Lawrence edition.

Rare opportunity
Chapman knows the Black Spring poets as well as anybody; she's published their work for years. The visual artist started First Intensity Press in 1993 and prints a nationally circulated journal of the same name, as well as collections of short poetry and fiction by local and national authors.

The John Moritz poems in Black Spring first appeared in "Cartography," a First Intensity publication. The poems are accompanied by drawings Lee created in response to the words.

All the poets in Black Spring have been publishing work in Lawrence and beyond for decades. Perhaps the most well-known and widely respected, though, is Ken Irby, who teaches English at KU.

"His command of language and his use of words in creative and innovative ways is just really awesome, overwhelming," Chapman says. "It's marvelous, difficult writing, and yet it's OK if you don't totally understand what he's getting at every time because the language is so involving and engaging that it doesn't matter.

Kenneth Irving/Special to the Journal-World

Kenneth Irving/Special to the Journal-World

Poet Jim McCrary and Artist Lee Chapman, circa 1970, stand at the doorway of the Tansy Bookstore, 12th and Oread. The bookstore was a familiar hangout for poets and artists in those years. Both are featured in the Lawrence issue of Black Spring, a New York-based journal of poetry and essays.

"He's going to take you somewhere, and it's probably going to be somewhere you've never gone before."

The Black Spring poets will give a reading Friday at The Raven Bookstore, which carries the journal. The event is something of a novelty because - despite their former propensity to frequent be-ins, slams and other literary happenings - most of the authors don't participate much in the local scene anymore.

"Young people have more energy for those sorts of things," Roitman says. "It's really lovely that we're all doing this reading because we don't do that many of them."

from "I Hear America Cooking"

My own theory is that the pig landed near Miami circa 1542
and left the same day in a rented DeSoto
Sometime later, the pig arrived in the SW
and enjoyed the distinction of being
the only adventurer of European origin
to be both domesticated and savoured in that region.

"The white man will freeze to death in the arctic,
if left to himself," the elder said
after translation, "but now with schooling
some Inuit too have frozen."