Gone are the Zen rock garden and Marcantonio Franceschini's late 17th-century oil paintings of "The Muses." In their place these days: fire-engine-red walls and large-scale projections of local bread bakers and beer brewers.

No disrespect, Marcantonio. But these are changing times.

"I think one of the issues for our society is that there are very few institutions that we feel comfortable inside," says Saralyn Reece Hardy, the KU museum's new director. "I find that increasingly true for creative people: how do you maintain your creative edge inside an institution?"

Six months ago, Hardy began her quest to answer that very question. The former director of the Salina Art Center - a contemporary-leaning institution - suddenly found herself in Lawrence charged with the task of overseeing the Spencer's thousands of years of cultural artifacts. 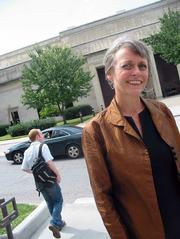 New museum director Saralyn Reece Hardy says that the Spencer should be a place that stimulates creative thinking rather than be known as a "purveyor of truth."

In response, she went out on a limb and did two things the museum has never done before: commission faculty to create a new work of art, and invite student work into the museum.

"I wanted to have the Spencer's processes become more like a conversation than a speech," Hardy says.

"I'd love to try to create a place that people feel is really their own and has a lot of creative latitude. So if some night you come and there's a band playing on the lawn, you're not surprised - it's just the kind of thing that we do."

The Spencer's new attitude isn't just lip service. The past year has been packed with events catering to young adults and community members who might never have thought about setting foot in the mausoleum-esque edifice up the hill from Memorial Stadium.

On Thursday, the museum unveils its fall showcase. Its newly cleared central courtyard will feature a video installation by design professors Earl Iverson and Luke Jordan, and its lobby will be decorated with 20 photographs by KU students.

The exhibition marks the first time student work has appeared in the museum, said Brett Knappe, a curatorial intern for the museum's photography collection,

"Hard to believe, but we can't find any record of it," says Knapp, who coordinated the exhibit. "A lot of people felt it was about time."

The exhibition features five student-photographers' interpretations of "work." Designed as a complement to the "Lee Friedlander at Work" exhibition, "The Spencer @ Work" seeks to establish a precedent where student work can be hung alongside the work of well-known artists, Hardy says.

"I'm not a big believer in dividing people up by categories: 'Now it's the students; now it's the faculty; now it's the artists from China,'" she says. "I like the fluidity where you're really making decisions based on quality and meaning ... I would like the Spencer to be a place that can surprise you."

Among the successfully "surprised" is grad student Matthew Friesleben, who contributed four silver-gelatin prints to the exhibition.

"Usually my prints aren't in the public eye for much longer than they're on the drying rack," jokes Friesleben, an architecture major. "It's been an exciting opportunity ... (Friedlander) is one of my favorite photographers, so to have a chance to hang my own work alongside his is quite humbling."

Though his primary ambition is to design buildings, Friesleben says the exhibition has inspired him to organize his photography collection and put together his own show.

"It plants the seed to make me want to pursue it more," he says. "When you're in school anything is possible, and I definitely feel that way now."

The Spencer also surprised design professors Earl Iverson and Luke Jordan by commissioning the duo to create a work-related video installation. Iverson, who has taught at KU for 32 years, says he believes the Spencer is taking radical steps to appeal to people who don't typically step through its doors. 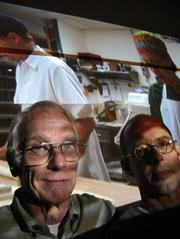 "The normal way of working for museums is to carefully build up collections of selected existing artwork," he says. "When a museum says, 'We're going to install something that we don't have a clue what it's going to look like' - that's different."

The resulting installation "Feeding Lawrence/Work + Workplace" took shape over the course of three months as Iverson and Jordan filmed workers at Wheatfields Bakery, Free State Brewing Co., Sunflower Broadband and the Lawrence Journal-World. More than seven hours of looped video will be projected on the four walls of the Spencer's central courtyard - one wall devoted to each local business.

According to Jordan, the project represents an adventurous foray into new media techniques for both him and the museum.

"What we're doing has been curated by the photography curator, but it's not clear that that's even where it would fit," Jordan says. "The direction that things are going doesn't really fit into traditional areas of collecting ... It creates a special kind of problem for a small museum, where it means a bigger, more radical change to even think about bringing new things in."

To draw more attention to its changing interior, the Spencer will attempt to create a big fuss on the exterior as well. A large, wooden frame will enclose the grass plot near the museum's main entrance, signifying a performance space where members of the local community can do their "work."

The scheduled list of performers already includes local architects, dog groomers, blacksmiths, dancers and more, but the space will also be open to the public.

Curatorial intern Brett Knappe (right) helped organize the "Student Work at the Spencer" exhibition, which features four photographs by Matthew Friesleben (left). The student show was designed to complement the current "Lee Friedlander at Work" exhibition and will take place in the museum's lobby.

"If it's something you're willing to do in public and it's legal, this is a great place to do it," Knapp says. "Do your own performance piece, bring your band to play, paint, do gymnastics - the space is there for you."

The project has excited longtime Spencer volunteer Betsy Weaver, who has been working as a liaison to the community for more than two decades.

"Art museums in general I think have had a history of being elitist," says Weaver, who spent 15 years as the museum's docent program coordinator. "We were trying to reach out, but we were somewhat hampered, because unless it was an overall museum goal it really wasn't going to get a lot of support."

Weaver says she was encouraged by the attendance at this month's "Dollars for Scholars" sale, indicating that it attracted a wider spectrum of the local population than the museum typically sees.

If Hardy's visions continue to propagate, that trend will likely continue.

"We want everyone to think of this as your house, your backyard, your living room," Hardy says. "Everything is open to everybody."