From the garage to The Granada

Lansing band among those bracing for battle's bigger stage

Stuck to the shelves in a cluttered garage at Brandon Rimmey's rural Lansing home are dozens of band stickers.

The names Alkaline Trio, Yellowcard, Lost Prophets and Green Day are pasted around the garage, as if to channel those pop-punk and punk rock spirits.

It's 9 o'clock on Thursday night, and the members of My Last Day are in the garage trying to follow in the footsteps of their favorite bands by playing their own original tunes.

It's a school night, but the band will be here until 11 p.m. practicing, like it does about four nights each week. This practice has to be good, as do the next few. My Last Day will play its most high-profile show to date on Saturday at The Granada in Lawrence as one of more than 20 invited bands in the eXposure Battle of the Bands festival.

Right now, the pressure is mounting.

"I really want to do a good job there," said Rimmey, a Lansing High School senior and guitarist for My Last Day. "It's just an honor to play there."

Rimmey said the band is well aware of the big names that have graced The Granada stage during the past decade. Matchbox 20, Marilyn Manson, John Mayer, Kid Rock and Weezer have all played the Granada. G-Love and Special Sauce is a regular visitor, and the Smashing Pumpkins kicked off their world tour there in 2000.

Those are big shoes to fill, especially for high school-aged kids with minimal experience onstage. Two members of My Last Day - Rimmey, 17, and University of Saint Mary freshman Ryan Shea, 19 - have been playing together for three years. Drummer Jeff Goodlin, 16, has been with the group for a year, but guitarist Andy Armstrong, 16, and singer Alaina Romine, 16, were added only recently.

eXposure Battle of the Bands

eXposure Battle of the Bands

Now, after just a few short months and three shows together, they're ready to make the jump from small shows at Groundwork Coffee House in downtown Leavenworth to the 700-plus capacity theater in Lawrence.

If things go their way this weekend, then it's possible the Battle of the Bands could be the launching point for a career in music.

"Whatever happens," Shea said, "it's a big thing because we aren't a local band playing on some weeknight. We're playing on a Saturday night, which is really prime time."

Birth of a band
In its current form, My Last Day has been around for only about three months, but the band has been in the works for years. In the fall of 2002, a girl who had dated both Rimmey and bassist Shea introduced the pair, knowing both were musically inclined. Shortly thereafter, Rimmey, Shea and some friends formed rock band Emergency Exit.

By the spring of 2004, however, they weren't making much progress and the band broke up. Last fall, the two recruited new members and attempted to form a ska band, but that project fizzled quickly. Despite the failed project, the duo gained Goodlin, a talented up-and-coming drummer.

"That was probably the start of My Last Day," Shea said.

Rimmey, Shea and Goodlin began playing regularly and building a catalog of punk rock material, but they still wanted a lead vocalist.

"Brandon and I wanted to focus a bit more on playing instead of singing," Shea said.

Male singers dominated the punk rock scene, so they opted to go in a different direction and asked Shea's good friend and classmate, Elena Stephenson, to sing.

The right mix
During mid-summer, the band began recording a demo, but they decided their raw sound needed some refining. That's where Armstrong came into the mix.

"We'd been told for a while that we needed another guitarist to thicken up our sound. And it's true. We needed that," Shea said. "Andy brings a new element to our orchestrating."

With Armstrong on board, the group completed its demo, but then Stephenson moved to Texas for college. Suddenly, the band was up a guitarist and down a singer.

"We actually tried looking for a guy," Rimmey said of Stephenson's replacement, "but then we found out we'd lose our last year of progress because we'd lose all of our old songs."

Enter Romine, a Lansing junior with a singing background rooted in country but a passion for punk.

"Alaina came out, and she blew us away," Rimmey said of Romine's audition. "It was a pretty easy decision."

With the lineup set, it was time to rock. After spending just a few weeks together, the new roster of Rimmey, Shea, Goodlin, Armstrong and Romine took the stage together for the first time on Aug. 12 at Groundwork.

When Romine joined the band, she said she knew she would take a lot of flack for being the only girl in the band. She'd be the butt of jokes. She'd be the subject of constant pranks. 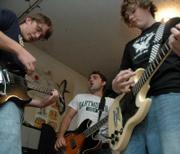 Rimmey, Shea and Armstrong during a band practice on Thursday night in Rimmey's garage.

What she didn't expect, however, was that her first performance in a small local coffee house would be followed just six weeks later by the band's most high-profile show to date - a trip to The Granada.

"It's really nerve-wracking," she said of the Saturday performance. "I was hoping we'd get something like this later when I'm more comfortable."

The big show
When My Last Day takes the stage Saturday at The Granada it hopes to deliver a high-energy show that will rattle the crowd from the first guitar riff.

"I wouldn't be surprised if I broke my guitar," Armstrong said with a sly grin.

The band promises to offer a sound unlike what most other rock and punk acts will bring to the stage.

"We're acoustic death metal with a touch of reggae," Rimmey joked of the band's sound, although the lighthearted comment had some truth to it. Much like the mixture of styles he mentioned, My Last Day's sound varies depending on the song.

My Last Day drummer Jeff Goodlin twirls his drum sticks at the start of a song.

"We tend not to play just one genre of music," Rimmey said. "At our last show with the old Elena, one of the songs was just acoustic and it sounded like a country song. Then we'll go into one that starts out with a ska riff and then goes into a metal field."

The varying style should make the band stand out, but so should a few other things. For one, the presence of a female vocalist is something most of the bands won't have. Second, My Last Day doesn't fall into the screamo category that has defined much of the recent punk movement.

The members of My Last Day hope their sound appeals to the ears of all in attendance at The Granada so the Battle of the Bands can be the first step in a successful career. The winning band will receive 16 hours of free studio time with Black Lodge Recording, as well as the opportunity to open for national acts around the area.

"We want this to be a show that can start a chain reaction to bigger and better shows," Rimmey said. "We're hoping this will spark something to get us on the right path."