Does the game do better than its real-life counterpart this year?

It's the comeback year for the NHL, and that goes the same with EA's NHL'06. If anyone noticed, the NHL was out of commission last year due to owner and player disputes. Thankfully they have worked out their differences and the puck is back on the ice. NHL '06 has been a successful franchise for EA dating back to the mid 90's. With minor improvements here and there, EA may have not made giant leaps but it's definitely a better overall game than previous years. Many would agree that controls make or break a sports game. To an extent this is true because as the gameplay tries to mimic real-life movement and responses, this is what is key to making a sports game "feel" real. EA has changed some things with the controls that are both welcomed and unwelcomed.

It's been a long time waiting for a game to implement a shot scheme that wasn't based on luck. Even back to the glory days of NHL on Genesis to Wayne Gretzky's Hockey on N64, shooting the puck and making a goal took no aiming at all. EA addressed this issue by implementing a targeting system where the player actually aims on the goal where he would like to place the puck. Of course player ratings go into how accurate you are, but nonetheless it works and feels great. To give an idea of how it works, the player will push the slap shot button and as they hold it down they'll be able to aim with the left analog stick. Upon release the puck will be fired at the goal. It's fast and very smooth. To go along with the new shots, moving around the ice and controlling the puck is done better this time around too. 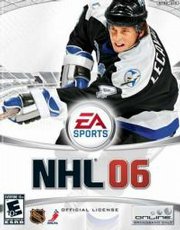 Dekeing, if you none of you know, is a maneuver done by the offensive player to fake out the goalie by switching the puck from the left side of the stick to the right side, and back and forth. EA moved this over to the left stick so it feels meshed into your movements, which is how it's done in real life. The right stick is now used for trick shots only done by certain star players. These can range from 360-degree moves to between the leg shots. It does give the game a more arcadey feel because you'll see about 10 different amazing shots per game. Luckily, by pulling off one of these shots it doesn't guarantee a goal every time.

Sadly, these control features are hindered by a lag to the overall response. Anyone should know that moving on ice is difficult. This in turn affects momentum and weight distribution. EA seems to have added these calculations into player movement, but what it does is make the all-around game laggy. Some people will applaud EA for this, and some, like me, will think it's just too difficult and frustrating at times.

At first glance it does not seem like EA changed the visuals at all. However, as you play the game you'll begin to notice that instead of working on the overall look, EA has focused on the finer details: player animations, facial expressions, textures, etc. A graphical overhaul isn't necessarily the best way to improve the look of the game. I'm very happy EA went this route. After all, seeing the same check animation over and over does get tiring. The commentary is decent. This is an area most gamers want to know about and there's really nothing to say about it except that it works and is not annoying.

Beyond exhibition mode, the usual Dynasty, Create-a-Player, and Create-a-Team modes all made it into this year's game. The Create-a-Player mode is especially fun. Want bushy eyebrows or an oversized nose? Are you kidding me? Who doesn't? In all seriousness, you basically can recreate yourself right down to the dimple you have on your cheek.

Overall the game has improved with its change in direction. The industry already has arcade hockey games and EA has always done a great job of balancing arcade play with simulation play. It would appear though that they are starting to take a step onto the simulation side. Hopefully this year's installment is an omen for a good NHL comeback.