Billions mine 'Trash and Treasure'

After removing piles of clothes from a sofa, the four members of The Billions take a seat in the living room of their farmhouse/studio where the band recorded "Trash and Treasure."

Bringing new meaning to the term "starving artist," vocalist/bassist Dan Billen offers the group a gallon of curdled milk and some deformed tortilla shells to snack on.

"Don't mind him; he gets this way when his blood sugar is low," says drummer Ken Komiya. "He just needs a granola bar."

Given the way they joke around, one would think they were brothers instead of bandmates, and in fact two of them are.

Topekans Dan and Sam Billen started the band in 1997 with long-time friend Jared Bowes. Blending harmony and humor, The Billions added Komiya on drums in 2002 and guitarist Simon Bates in 2003 when Bowes left for Chicago.

The act relocated from Topeka to Lawrence in 1998.

"We've all gone to school at KU, and a band headquarters in Topeka just wouldn't make sense," says guitarist/keyboardist Sam Billen, who shares vocal duties with his brother. 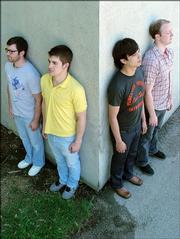 The headquarters of which Sam speaks is a massive, yellow farmhouse that, at one time or another, all of the band members have called home. Bates is the only one in current residence, but the group uses the house for practice sessions and recording.

The move to Lawrence also made sense with schooling. Two of the members are enrolled at Kansas University. Komiya is majoring in special education with an emphasis in students with mental handicaps, and Sam's major is Japanese.

That Eastern influence comes out in the song "In Japan" from "Trash or Treasure." Sam cites his four trips to the country as inspiration for the song. Komiya is also of Japanese descent.

"It's been the subject of a lot of controversy," Komiya smiles. "I'm half-Japanese, half-Iranian actually."

"In Japan" is an example of the differences between this album, recorded independently, and the previous Billions CD, "Never Felt This Way Before."

"Our last album, we had 10 days in California and there was a lot of pressure to get it done," Dan says.

"With this one we weren't rushed with time and money and other restraints," Sam adds. "We worked on it for a year."

"And we cried a lot more on this album," Bates chimes in.

The Billions / The Girl Is A Ghost / thesistermaria

The band's label, Northern Records, handles primarily Christian or Christian-related artists. But Dan laughs that if someone were to ask the company if it was a Christian label, it would respond, "Hell no!"

However, the Billions don't downplay their faith, even though the members are careful not to alienate potential fans.

"We don't preach or judge people who come to our shows," Sam says.

The Billions' sound has much more in common with contemporary indie rock than most non-secular music.

"People hear 'Christian rock' and automatically go 'oooh' and take a step back. But that's because Christian music is usually 10 years behind the current music trends or trying too hard to copy popular songs. Right now we're starting to hear Ace Of Base-inspired songs," Dan quips.

The Billions' new CD, however, sounds more like a mix of Modest Mouse and early Weezer than stereotypical religious music. Catchy, pop beats in "Another Planet" and "You Are My Girl" are energetic and perfect for sing-alongs.

"My little niece loves the song 'Another Planet,'" Dan says. "She sings along from the backseat (in a high, little-girl voice) 'I'm from another planet, where all the people loooook the same.'"

Other songs, such as the nostalgic "Last Star," are almost chilling in their beauty.

"It just seems timeless to me, not '80s or '90s, it just stands alone," Dan says. "Plus it has this Fleetwood Mac guitar solo on the end - sounds just like them."

On any given track, it's also possible to hear one of Dan's own musical innovations. Above the door of the studio/practice room hangs a row of antique-looking keys.

"I picked keys up everywhere, then I checked their pitch and hung them up here," he says. "They make a really cool effect, almost like chimes."

Being innovative is almost commonplace for The Billions, as are the high expectations surrounding the release party of "Trash and Treasure."

Though they were coy about revealing all of the plans for the show, Komiya promises a guest appearance by his brother on the violin.

The band members pile into a car, mentioning being on the hunt for trash cans - something to do with "setting the mood" for the concert. If props are the trash, the music will be the treasure.