Craptacular rendition of the prized series

Good: You can play as Jack Bauer

In the 24 universe, there have already been five instances in the last few years in which a national crisis has been presented and resolved in exactly 24 hours. If that wasn't unbelievable enough already, 24: The Game introduces another ridiculous day for Jack Bauer between seasons two and three (which also happens to be the same time period that Jack got addicted to heroin:which the game doesn't address). Despite the ludicrous nature of the show, I've been a hardcore fan of every single season. Because of this, I tried to hold out on some hope that the game experience would feature even one tenth of the intensity and action of the show. Sadly, it fails on virtually every level.

Early in development, the producers of the game promised 24 fans that it would bring up some important story points and unanswered questions between seasons two and three. This intrigued me, as Jack went undercover with the Salazars before season three, and I always thought this would be an interesting part of 24 lore to see played out. 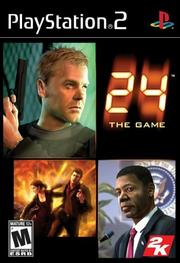 Unfortunately, these "unanswered questions" that the game addresses are such inconsequential ones as "How did Jack meet Chase? How did Kim start working at CTU? How did Palmer deal with the assassination attempt?" They're all matters that were largely forgotten at the beginning of the third season, and for good reason: they're boring. Kim was always a weak character, Chase was basically a poorly acted mini-Bauer and the attempt on Palmer's life was a mostly-dropped plot point. If you're thinking about playing 24 because you're a big fan of the show and you think it might deliver some of what you're used to, just forget about it. It comes nowhere close.

The sad thing is, this game had potential. The breakneck speed, constant action and great characters from the show could have lent themselves towards a killer gaming experience. They could have even made it real-time, just like the show. Unfortunately, nearly every aspect of playing 24 is terribly frustrating and borderline broken. Control over the characters is very loose, and the awful camera does nothing to remedy the situation.

It tries to incorporate a lock-on system similar to 007 Everything or Nothing, but it doesn't work at all. Whereas in EoN, you could aim anywhere within the lock-on you wanted, trying to pinpoint a location on the body in 24 is near impossible. It becomes a neverending cycle of "Lock on. Shoot 'till they're dead. Lock on. Shoot 'till they're dead." There is no convenient way to go through the menu or inventory, so be ready to take a lot of bullets when you switch guns or try to use a health pack.

Enemy AI could best be described as "retarded." They in no way react like actual people in a combat situation, and their attempts at taking cover involve standing near a wall while still being in plain sight of Jack Bauer. Collision detection is a foreign thought in this game, as I shot a terrorist in the head at point blank range at least 40 times with a machine gun, and it didn't even register.

The show is famous for its very liberal use of split-screen. Being real-time, it's a great way to show what the different characters are doing at a given moment. For some reason, the producers of the game thought it would be a good idea to incorporate this into gameplay. You'll walk into a room, and the screen will split (while you're still playing) to show you the bad guys. While a good idea in theory, it's actually very jarring and annoying in execution.

Perhaps the only semi-positive thing I could say about this game is that it does a decent job of mixing up the gameplay. In one mission, you might be on a full-out assault as Jack Bauer. In the next, you might be involved in a car chase while playing as Tony Almeida (R.I.P.). And yes, at one point you do have to play as the most unlucky person in the universe Kim Bauer (yeah, she gets kidnapped:..again).

Adding to the diversity of gameplay is the inclusion of several minigames. It's just too bad that all of them are absolutely banal and in no way entertaining. To give you some sense of how awful these minigames are, I'll just tell you that there are several points in the game in which you have to manually defrag a hard drive. The bomb-defusing and password-cracking games are just as bad. Interrogating enemies becomes its own terrible minigame, and features you looking at some kind of heart rate readout while pressing X, Triangle or Square to raise and lower the line. If you fail, you have to watch the entire interrogation sequence again. It's as fun as it sounds.

I found it humorous that the graphics in 24 are actually worse than several launch games from six years ago. Tekken Tag and SSX both look infinitely better than 24, which features some of the muddiest textures and glitchy animations I've ever seen. Some characters don't even resemble the actors who play them (Ryan Chappelle comes to mind). Explosions look like someone made a circle in Microsoft Paint and used the orange "fill" command.

I guess they used up most of their allotted sound-recording time with Kiefer and the other main characters, because the bad guys have a tendency to repeat the same lines over and over again. I can't tell you how many times I heard "Intruder!" or "DIEEEE!!!" Kiefer does a decent job of bringing his constantly-screaming Bauer voice to the PS2, but other actors sound somewhat bored (Carlos Bernard especially). Thankfully, the show's composer Sean Callery does the score, so the audio isn't completely terrible.

24 had a ton of potential to become an awesome game, but Cambridge Studios really dropped the ball. I'm as hardcore of a 24 fan as they come, but not even I could convince myself that this was anything but a steaming turd. Stay away at all costs.