The Age of Empires series has been a staple of the RTS genre since the original AOE redefined the concept back in 1997. Through two sequels and multiple expansion packs, the series has evolved a great deal. With its latest iteration, Age of Empires: The Age of Kings taking that evolution to a whole new level.

Fans of the PC games will be surprised when they see AOK on Nintendo's touch screen handheld. Out is the "Real-time" and in is the "turn-based." That's right. AOK DS is essentially a blend of Advance Wars, Fire Emblem (GBA) and of course, AOE. In fact, it's pretty much an Age of Empires themed cross between those two games. This isn't actually a bad thing, as both games are excellent titles, but at the same time it does tend to give you a "didn't I just play this game last year?" feeling.

The premise behind the series has been to take your band of villagers and build a town, armies and new technology as you advance through various "ages" that bring with them improved buildings, units and more, progressively growing as you play on. The goal is to grow and advance through the ages the quickest in order to get a jump on the opposing forces. This all takes place in a real-time environment, often creating very tense, nail-biting scenarios where a small delay in preparation or ill-planned battle could literally mean the end of the game for you which of course kept the excitement level top notch.

With AOK, the gameplay is slowed down to a turn-based pace, meaning as slow as you like, which changes the strategies and dynamics of the game completely. This aside, the game actually manages to retain most of what makes AOE great. Units, campaigns, technologies, resources and even many of the AOE sound effects and music have transferred to this edition quite well. Units are moved about a grid style map based on their movement range, and can then attack, build buildings, demolish buildings, use special unit powers, etc. Combat is simple, but balanced, which translates from the PC original's quite well. It's just as simple as it has always been. Two units go at it, with one either destroying the other, or damaging it and then receiving counter damage. Again, any Advance Wars veteran will understand how this works perfectly, and newcomers will be quick to grasp its basics. 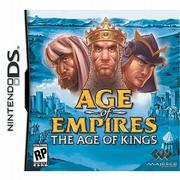 Unit diversity is key to this style of game and in this area, AOK actually outshines Advance Wars. Every unit has its own unique attributes that, when used effectively, can create a very deep and compelling strategy game. Some units have advantages or disadvantages over other other unit types (such as pikemen over horses or archers against siege weapons), some can heal friendly units or convert enemies and some can attack or defend from a range, avoiding close combat all together. Need to take out a castle? Forget the archers and knights, bring in the Siege weapons and infantry for example. With over 40 units and 15 buildings available for your war-mongering ways, it is easy to come up with all new ways to approach any strategic situation.

Research works almost exactly the same way as it does in its PC brethren. You pay a certain fee for a particular technology's development, a certain amount of food and gold, and it is discovered on the following turn. A certain number of technologies must be developed before one can advance to other ages in most instances. Simplistic sure, but what more do you really need?

The maps are of course much smaller in AOK vs. AOE, as is just about everything else. Towns are condensed into small 9x9 squares in which certain building types can be constructed in certain places, with mines and mills spread out near the town. Food and gold are produced by these mines and mills all on their own, so there is definitely more focus on the combat aspects of the game than resource gathering. Too many times I'd be busy fighting a battle in past versions of AOE, only to turn around and realize that my workers have been sitting idle, waiting for me to redirect them to a new resource or build project, so more simplicity in this area is quite welcome.

There are a few weaknesses worth mentioning. The gameplay is displayed creatively, but isn't exactly pretty, with much of the animation and textures appearing very pixelated and somewhat blurry at times when animating rapidly. The music and ambient noises work well, but the sound effects become annoying when they are repeated a half-dozen times every turn. Soldiers yell and horses gallop when charging into battle, but the battles move so quickly that it just seems unnecessary and again, annoying.

For the most part however, this is a great game. The real shame here is that it has to go head to head with the king of handheld strategy games: Advance Wars. Age of Kings certainly does a good job of competing with AW, but ultimately is unable to top it. With that said however, if you are a fan of either series (AOE or AW), you will enjoy Age of Kings and it comes highly recommended.