Good news Xbox 360 owners: there are now two games that look, sound and play "Next-Gen". The first is Fight Night: Round 3. The second is Ubisoft's Ghost Recon: Advanced Warfighter.

GRAW begins about how you'd expect a Tom Clancy game to begin. The United States and Mexico are on the verge of signing a NAFTA-like trade agreement when some pesky Mexican rebels interfere with the proceedings, leaving the presidents of both countries stranded in some very hostile territory. Luckily for them, Captain Scott Mitchell and the rest of the elite Ghost Squad are on the scene for just such an occasion.

The ghosts in GRAW come equipped with state-of-the-art weaponry-circa 2013. This includes lightweight bullet-proof vests and hybrid night vision goggles, but their most important toy is the Cross-Com. The Cross-Com is a heads-up display that does a variety of tasks for the soldiers including identifying enemies with a red diamond shape, detailing their health percentage and distance from the squad. It also provides video feeds from all the Ghosts and any other friendly personnel you may have access and streams video feeds directly into the visor so you're always up to date on the game's changing objectives and storyline. In sniping situations the Cross-Com will outline the bodies of enemies that can be shot through solid objects like concrete walls, canvas medical tents or other surfaces penetrable by a bullet the size of a Thermos. This allows you to clear entire areas without compromising your troops or escorts, which is invaluable. 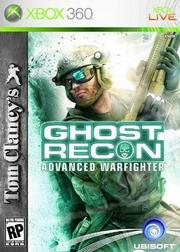 Red Storm's implementation of the Cross-Com is amazingly intuitive. Commanding your squad members or other friendlies is accomplished via the D-pad. Ordering your troops to attack an enemy is accomplished by pointing at them with your aiming reticule and pressing Up. Moving your squad is similarly done by pointing at a desired spot on the map and, again, pressing Up. Getting your troops to fall in behind you is done by pressing Down. If GRAW were a faster game this scheme would be cumbersome, since you'd have to take your thumb off the left analog stick or stretch your other hand to issue these commands, but since it's pace is much more methodical it never comes into play. If you're in charge of more than one type of unit you can cycle through them by pressing Left or Right on the D-pad. From there, the commands are the same as those for your Ghosts.

The game's visuals also amaze. While it may not look as good as the target images we were shown about this time last year, GRAW is still one of, if not the best looking 360 games out there. Levels are large and highly detailed. The light sourcing from the sun onto surfaces like road signs, windows and your helmet are all very impressive. The muzzle flares from machine gun bursts and the ricocheted bullets off impenetrable surfaces both look astounding and the character movements are very life-like and full of subtleties (watch the way a soldier's run changes from when he starts out shouldering his weapon to when he lowers it). Everything runs smooth no matter how much is going on onscreen at a time. My only complaint with GRAW's visuals is the lack of environmental interactivity. Shooting an object, be it a concrete wall or a flimsy metal street sign does no discernable damage to it, it's as if everything's bulletproof.

The game's sound complements its outstanding visuals rather nicely. Hearing rebels off in the distance behind you or down what seems to be a dead-end alley creates a great sense of paranoia. Bullets whiz past your head and find a spot in the wall behind you with a distant "thunk" and explosions will shake your room. At times, it gets to be overwhelming, especially when you or your squad is on the wrong end of a mortar or tank round.

The last leg in GRAW's trifecta of polished game elements is the level design. All the levels (over a dozen) are dynamic, multi-tiered and give way to the game's ever-changing objectives. One area finds Captain Mitchell alone behind enemy lines, armed only with a sniper rifle, sidearm and grenades. The level relies heavily on the use of smoke grenades to mask your whereabouts and then using the combination of sniper rifle and night vision to dispatch your foes unnoticed. Then it suddenly changes to a Recon mission and then a Search and Destroy. In another you inch your way through a heavily fortified downtown area of Mexico City towards the US Embassy. The entire mission revolves around making calculating moves towards the rally point, covering your squad mates and always watching the rooftops for sniper activity-until you reach the embassy and are forced to fend of approaching soldiers and armor-plated convoys. Many of the levels, particularly the urban ones, feature multiple waypoints. There's always a back alley or other flanking opportunity close by and it's possible to go about the same objective in a different way, giving rise to plenty of experimentation.

GRAW's major shortcoming is its inconsistent A.I. for both the opposition and your allies. At times your enemies behave extremely lifelike taking cover, laying down suppressing fire and throwing grenades to get you out of hiding. Other times you can snipe one enemy and the foe directly next to him remains unfazed as if he's waiting for his turn to catch a bullet between the eyes.

This inconsistency also makes their actions routine and predictable. The enemy A.I. is so scripted that their locations or patrols do not change regardless of how many times you die or how many different ways you approach a situation. So instead of a mission being something of a calculated effort to minimize casualties and complete objectives it is boiled down to mere trial and error at times.

Teammate A.I. is also spotty. Sometimes they take cover in broad daylight, sometimes they continually fire into walls or other solid objects. On rare occasions they refused to follow my orders. Sometimes they randomly pursued enemies into fortified territory. In another incident they would not rally to my position no matter how many times I gave the order, forcing me to restart the level and making me wish for a "Court Marshal" command.

Once you've plowed through the single-player campaign there's still plenty of replay value in the form of GRAW's expansive multiplayer. This mode differs so much from the single-player that it's practically a second game altogether. For starters, the entire mode is in the first person perspective instead of the single-player's third person point of view. Gone are the Cross-Com and the myriad of commands and cover options for yourself and your squad. In a strange step backward, your gun is not even viewable. The resultant gameplay feels more akin to previous Ghost Recon games and earlier versions of Ubisofts other Clancy tactical sim, Rainbow Six. I understand the departure of the Cross-Com, but the lack of a visible weapon is a serious step backward and the shift to first-person is a little disorienting after playing the single-player.

That said, the multiplayer features the usual run of game types (Death Match, Elimination, Territories and CTF), but the most satisfying mode in multiplayer is campaign.

In multiplayer campaign up to 16 players via Xbox live or System Link comprise a team of Ghosts that go up against A.I. controlled opponents. Each of the game's maps were made separate from any of the single-player's. However, they all feature the same multi-tiered, branching pathways design.

In order to lay down flanks, provide or receive cover fire or just survive in general teamwork and communication are a huge part of GRAW's multiplayer. As a result the level of enjoyment is completely dependent on your teammates. If you're serious about the game it can be very frustrating to attempt something as methodical as Territories or Campaign with a team that plays like it's Halo 2. If you're serious about the gameplay and you're lucky enough to get connected to some people who are just as serious the rewards are blissful. It's just a shame that Red Storm didn't place some sort of ranking system into the multiplayer to make this easier.

No single aspect of GRAW makes it great. It's the combination of the impressive visuals, outstanding surround sound mix, winning level design and, for the most part, solid A.I. that create a game that is at times inspiring. The best thing about GRAW is its ability to create emotion within the player. It's the feeling of exhilaration when you run from one piece of cover to the next or the sense of teamwork you feel when you order a squad member to revive a fallen comrade while you provide cover-fire. It's the urgency felt when you and your troops make that last dash towards the evac point or the feeling you get the first time you notice that when your character holds his breath to steady his aim, you hold your breath too. That's the beauty of Ghost Recon: Advanced Warfighter and it's the true power of this new generation of consoles.

i would like to point out that it is possible to switch to the 3rd person view in multiplayer (it is in the options menu). i didn't realize this until someone pointed out the option to me in a match because i was disturbed by the switch to 1st person also.