Same boring genre action or something a little new?

Why: Not use vehicle controls like those in Mechassault?

When the Xbox360 was announced there were a bunch of current generation games and a couple original titles listed to make the launch window. However, when the launch finally arrived, only a couple original titles were available. Finally some of those titles are making it to store shelves. One of the more anticipated titles was The Outfit from Relic, the people that made Homeworld, because it promised to take a light hearted approach to World War II and to incorporate some real time strategy into a third person shooter game.

The Outfit is far from the standard World War II game. Instead of a serious and realistic approach it goes for an action oriented and blow-stuff-up style. This attitude spills over into the single player story. This story chronicles a fake special ops team, called the Outfit, and its mission to take out a particular German general. The story attempts to draw the player in using plot twists, attempts at romance, and some humor but never really succeeds. This is mostly because the whole game is fairly irreverent towards how war works and thus the single player just becomes training for the online component. 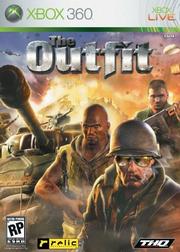 This online component is The Outfit's greatest strength. Though the solo campaign may be boring, it is a whole new beast when played co-op over Xbox Live. There are also three different competitive game-types Deathmatch, Destruction, and Strategic Victory. Deathmatch is self explanatory, Destruction is based on making stuff blow up, and Strategic Victory is about controlling different locations on the map and then making stuff blow up. Though this may sound monotonous, it hardly ever is because of the depth in the gameplay. The Outfit may look like a normal third person shooter, but in fact it is more like a real time strategy game played at the ground level. This is because vehicles, gun emplacements, air strikes, and ground reinforcements can be called in at any time through the Destruction on Demand menu. With these different forces on tap anywhere and any time in the match the game moves from pointless carnage to a strategically deep and engaging game. After a few matches the player will no longer think of running and gunning to victory but about how to place turrets and anti-tank weapons to better cover a specific point on the map and what vehicles work best in what situations.

In accordance with the new Xbox360 setup The Outfit features achievements. The single player achievements are fairly easy to acquire (whenever a "Medal Opportunity" pops onscreen, do the required activity to earn an achievement) and do not net many points. However, the online achievements are another story. These points are based on long term success (or failure) and skilled play. It may be awhile before someone is able to unlock all 1000 points.

Though The Outfit does provide a new gamplay style and a strong online component, it is severely lacking in some areas. First and foremost, the vehicle controls are the worst ever. Every vehicle controls like a brick. Too often vehicles will get stuck on walls and fly into rivers because they cannot behave or respond like the user intends. These unintended driving mishaps are completely attributable to the mapping of the controls. The right stick is used to aim the weapon for that vehicle while the left stick is for driving. This sounds normal, except for the fact that the driving stick runs on the same principles that Resident Evil 1 did up is always forward no matter where the camera is pointing. This becomes an issue because often the camera will get skewed from straight ahead and then the player is stuck trying to straighten everything back out. Throw in this mix a camera system that will often get stuck so close to the vehicle that the player can not actually see his ride and the whole ordeal becomes unbearable.

Furthermore, The Outfit is far from a beautiful game. All the textures and models look like they were taken straight out of a current generation Xbox game. Throw on that clunky animations and the visual experience is far from the expected next-gen sheen. Also, the audio is nothing to write home about generic rock music, mediocre weapons fire, and extremely dry voice acting.

THQ and Relic deserve credit for taking a chance to create a new IP based on a new gameplay mechanic and for moderately succeeding. But it is unfortunate that they allowed such issues to bog down the title. The Outfit is great for those who can survive frustrating vehicles and want to put the time in to mine the depths of the gameplay.