As a dedicated ultra-marathoner, Mike Goodwin often finds himself on state trails to run portions of his 20-40 mile treks.

That's why Goodwin devotes much of his free time to the Kansas Trails Council - a non-profit organization that develops and maintains 14 trails across the eastern part of the state.

"Without volunteer organizations like ours and others, the trails would probably just cease to exist," says Goodwin, the current president of the 32-year-old organization.

"You would not be able to hike at Clinton Lake because it would quickly overgrow. It's something that takes constant care, and the state parks frankly don't have the budget to have employees to maintain these trails."

The KTC depends on more than 100 volunteers to collectively devote 4,000-plus hours a year. Some of these volunteers head out every week with tools in hand, while others might contribute once or twice a year.

During the winter off-season, the KTC devotes most of its time to building and redesigning trails. With spring arriving, the KTC is kicking into maintenance mode. 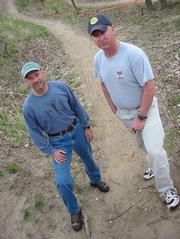 "We use hand trimmers and loppers and other tools to trim the trail back and maintain the weeds and stuff like that," Goodwin explains. "We want to provide as many opportunities for people to use trails as we can - whether it's for hiking, biking or horse riding."

The KTC also sponsors a number of trail-creation projects, including an extension of the South Lawrence Trafficway Trail to Sanders Mound at Clinton Lake. The organization is also involved in discussions to create a single trail between Topeka and Lawrence.

"It's all very tentative at the moment," Goodwin says. "But there are some discussions between the counties to provide a trail from the western side of Clinton Lake to the city of Lawrence."

Persons interested in volunteering with the Kansas Trails Council can contact Mike Goodwin at goodwinmw@cox.net or 785-221-1794. A calendar of KTC activities is available at kansastrailscouncil.org.

More local volunteer opportunities available at rhvc.org and at lawrence.com/volunteer.

While the KTC focuses its efforts on the Clinton Lake trails, the Lawrence Mountain Bike Club maintains the Lawrence River Trails. The group hosts a work-day session from 9 a.m. to noon on the third Saturday of every month.

LMBC Coordinator Neil Taylor says the group's workload has tripled in the wake of the March 12 microburst storm. Volunteers helped make the trail rideable just three days after the storm, but much work remains, Taylor says.

"We had more trees down this year than ever," he says. "They're cut down and moved off the trail, but we need to get them the rest of the way out. Some of the bigger ones we're going to use to make more obstacles on the trail so it can be a little more fun."

The LMBC draws most of its trail volunteers from its weekly rides, which occur every Friday night at 6:30 p.m. A Wednesday night women's ride is also in the works, Taylor says.

"It's a social organization - we do pub crawls and stuff all throughout the summer," he says. "There's a handful of people that are regulars. We could use 10 to 15 more."