Review: MX vs ATV On the Edge - PSP

Is it worth owning the embattled portable?

Learn to hate: The little spinning "loading" gear. You'll see a lot of it.

Ever go back to watching a VHS of one of your favorite movies after you've seen it on DVD? It doesn't look quite as good, doesn't have as many features and is generally nowhere near the general quality of the DVD. That's kind of what playing MX vs ATV On the Edge was like for me after playing MX vs ATV Unleashed on the consoles last year. The latter version featured tons of vehicles, tracks, challenges and most importantly, passable load times. On the Edge still features a lot of tracks, but the constant long loads and lack of a career mode really drag it down.

Simply navigating the menus takes a good deal of loading. Each time you click an option, it pauses to load the background image file before allowing you to make another selection. The main offender, however, is the loading of the actual race. I timed it several times, and it usually took between 1min 20sec and 1min 45sec, depending on the track and number of opponents. 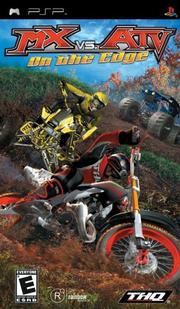 This loading issue has singlehandedly ruined many PSP games for me. Midnight Club 3 comes to mind immediately. It featured all the modes and cars from the console versions, but was virtually unplayable due to the unacceptable load times. I've said it before and I'll say it again portable gaming systems need pick-up-and-play games, not games that take two minutes to load. I can pick up my DS and play a round of Tetris online in the amount of time it takes to load a single MX vs ATV race.

There is no actual Career Mode, but it features several different modes. Supercross and Nationals are the primary race modes, although there are also less enduring modes such as Waypoint Race and Hill Climb. Nationals is far better than Supercross, thanks to the fact that it features larger outdoor courses (as opposed to Supercross's indoor arenas). All of the National courses are well-designed and feature a good amount of jumps.

Both the MX bikes and the ATVs behave realistically, and the turning controls are tight. My only problem with the physics is the unforgiving nature of landing jumps. If you're off even the slightest bit, you're bound to go flying off your vehicle, costing you precious time. The game also suffers from the lack of a true sense of speed.

To its credit, the graphics hold up to the console version pretty well. While the visuals are nothing to write home about, the game doesn't feature any glaring graphical glitches. Physics on the crashes look particularly good. Unfortunately, the sound effects are entirely generic, and the soundtrack is awful (one look at the "artists" on the soundtrack should tell you that: Nickelback, Papa Roach, Black Eyed Peas, Kottonmouth Kings, etc). It's a great "who's who" of crappy musicians.

If it weren't for the lack of career mode and the awful loading times, MX vs ATV could have been a decent racing game. I would have had no problem with some downgraded graphics if it meant I'd get to actually race quicker.