Brain Age is another one of the growing number of titles that could only be done on the DS. In fact, it's unconventional even when compared to the tons of unique titles on the handheld. It might be the only game I've played that seems to have a genuine intention of improving your brainpower, and an actual neuroscientist is one of the minds behind it. You'll get quite used to the laughing face of Professor Ryutu Kawashima as he gives you tips and monitors your progress.

The primary mode in the game is "Daily Training." Initially, the available tests are math-based and determine how fast you can complete either 20 or 100 equations. Holding the DS sideways, you see the equation on the left and write the answer on the touchscreen. At the end, it tells you how fast you did it and tells you what speed you performed at ("walking speed","bike speed", "jet speed", etc.). 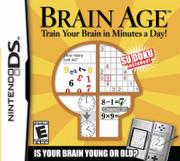 For each day that you complete an activity, you get a stamp on the calendar. Finish three tests and you get a big stamp. As you progress and get more of these, you'll unlock new tests. One measures how fast you can read out loud and another tests your recognition of syllables. One of my favorites is "Low to High," which flashes a bunch of numbers in a grid on the left screen. After they disappear, you have to click the empty squares in order of low to high numbers.

All the tests will chart your progress from day-to-day, which gives you a clear idea of how well you're doing. The game claims to improve your simple brain functions and I did see a steady upward climb on my math calculation speeds during the weeks I played it. In addition to the other training exercises, you can also calculate your "brain age" through a series of tests. A brain age of 20 is the best while a brain age of 80 is the worst. One of these exercises requires you to say the color of an onscreen word. The problem is, it seems to have a problem with identifying certain words (it seemed to have an especially hard time recognizing the word "blue"). 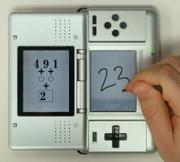 This problem lends itself to some skewed results more often than not. It's hard to put a lot of faith in the "brain age" it attributes to you if it counted you off because of a recognition problem with the game. It's not just with the voice recognition it happens with the calculations quite often. 4s will register as 9s, 3s will register as 8s, and so on. On the calculations, you're penalized five seconds for each mistake. It can get extremely frustrating to get your score knocked down for something that wasn't your fault.

Occasionally upon starting the game, the professor will ask you a random question. He may ask you what you ate for dinner last night, or what the first thing you did in the morning. Days later, he'll pop up and ask "What did you eat for dinner on 3/28?" Other times, he'll ask you to draw pictures of certain objects. When you play with multiple users on one DS, it will compare your pictures to theirs. You can also compare the graphs of all the users that are doing training.

My favorite part of Brain Age is definitely the inclusion of Sudoku puzzles. I love the newly-popular puzzle game, but pen-and-paper can cause the grids to get cluttered on especially difficult challenges. Sudoku on the DS is easily the best way to play it, as you can easily erase mistakes and get a better view of the grid. Tapping a square makes the right screen zoom in on it, while the left screen displays the full grid. The simple fact that this game includes tons of Sudoku puzzles makes the replay value sky-high. In fact, I'd buy this title even if it was only Sudoku.

Brain Age is a fun game that boasts a huge amount of replay value. Since you can only do a few tests a day, it's hard to really get tired of it. You can pick it up, do three training exercises, complete a Sudoku and put it down. Another great addition to the DS library.