At least: Try it

We always leave it to Nintendo to bring the wackiest ideas to the table. In fact, after seeing this past year's DS library, we pretty much expect it. But even the hardcore Nintendo believers wouldn't have seen Odama coming. Who in their right mind would think to blend real-time strategy with:pinball?

And that's exactly what you get. Sure, the RTS elements are on a diet, but what's there works:for the most part. Sadly, upon loading the first level, you quickly come to grips with one of the most rigid and inaccurate pinball physics models. The ball (Odama) doesn't react accurately to the flippers and when trying to navigate the Odama around your infantry, it can be troublesome.

The main goal is to guide your army toward the gate at the top. You have certain men carrying a "Ninten-bell" and the mission ends once the bell presses through the gate. In your way can be obstacles such as rivers, trees and, oh yeah, enemies. You can destroy certain structures or trigger certain events by hitting them with the Odama. With the supplied microphone you can give your infantry different moving and attack commands. You'll spend most of the time maneuvering your men away from the enemies to open up a clear shot for the Odama, which is the most effective way to take them out. 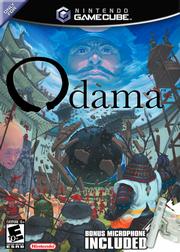 On each board are powerups and items. Some give you extra men and some items, like the rice ball, can be used to distract enemies. For instance, if the enemies won't stop bearing down on you, you can launch a rice ball to an open area and they will move over there to feast on it for a specific amount of time. This opens up a clear shot for the Odama and room for your men to advance with the Ninten-bell.

Later in the game multitasking and quick timing is imperative. In fact, it's maddeningly difficult. Not only is this Nintendo game not simple, but it is far from easy, making this a title only for the older, dedicated crowd.

What really complicates the entire promising process from being rewarding is the lack of collision detection. There will be countless times where the Odama simply passes through objectives and enemies. In most games this would be disheartening, but in Odama, a game that requires so many things to get just one little task accomplished, this fault is downright flattening.

From afar, the game looks decent. The medieval Japan backdrop suits the title well. But upon close inspection, the lack of detail in character modeling and textures really mars the visual appeal.

The sound, however, is bright and relevant. The voiceovers are wonderfully acted and the humor can catch you off guard from time to time. The crashes and effects from this huge ball creating wonderful chaos shine through in Dolby surround.

Odama proves that a pinball/strategy hybrid has merit. Who would've thought? But it doesn't take the extra step to polish all of the elements to make this potential beacon of innovation shine. I suggest trying the game if you get the chance; you won't get another experience like it, probably ever again. But a purchase is not recommended.