When: Did the war on terror involve checkpoint racing?

Any more it seems that every first person shooter is based on a character class structure; however, it was not always this way. In fact, only about four years ago games had only one class to choose from. That all changed when Battlefield 1942 hit PCs and became a huge success. Two iterations later and the game is still addicting and one of the best online shooters for PC. Thankfully that quality made it over to the Xbox360.

What also came with the conversion is a single player campaign for those without Xbox Live. This campaign puts the player in the boots of Chinese and NATO soldiers. The story, or what passes for one, is that the Chinese try to take over Some Middle Eastern CountryÂ® (it really is that forgettable) and NATO stops it. Each mission is preceded by an audio briefing that will either make the player laugh at the horrible NATO voice, or offended by the "Chinese" accent. The only reasons to play the single player are: to get achievements, to test the "hot-swapping", to play the challenges, and to experience the mission crippling glitches. 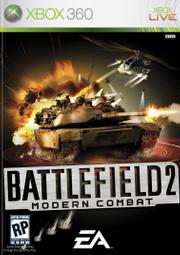 However, everything that the single player does wrong the multiplayer does right. The levels are fairly large and well laid out with many locations ideal for epic fire fights. The class based gameplay becomes extremely important because almost every type has a specific use and purpose. Surprisingly though, the one class that seemed to be the least useful was the medic because everyone dies too quickly to get healed.

The vehicles are a treat to control because the player is either driving or shooting and not doing both. Hopefully next time though the developers will place the acceleration and brake controls on the triggers as opposed to having to push up on the same thumb stick that is used for steering. Well, all that is true except for the helicopter. It just plain sucks and would probably have been better left out completely.

All this would be for naught if not for the game's ability to host 24 players in a single room. This size makes it possible to have epic battles and gives every rank increase a true significance.

Battlefield 2 was a visually solid title on the original Xbox and though it has been improved, it is no huge jump. However, what was improved (character models and animations most notably) pays off because it makes the experience that much more engrossing.

The control scheme also was not adjusted too much. In fact, with the remapping of some controls to the bumper buttons it feels even more natural than before. The one aspect of the game that could have used the most work is the audio. There is no single part of the audio that is excellent because most of it is so generic. The music is not bad but has no real substance while all the gunfire and explosions just seem to be slightly detached. It is hard to be impressed with average any more when the immediate competition is Ghost Recon Advanced Warfighter.

Battlefield 2: Modern Combat is neither a revolutionary game, nor an Xbox360 exclusive but that will not keep it from being one of the most played Xbox Live games. It will survive because the multiplayer is deep and addicting.

"Battlefield 2 was a visually solid title on the original Xbox and though it has been improved, it is no huge jump"

Is this reviewer serious? this is one of the nicest looking 360 games, and a giant leap ahead of BF2 on the PC. You can see everything has been remodelled at a higher poly count, textures are higher res and the lighting is excellent.