Bad: AI, missions are hit-and-miss in terms of quality, visuals

Fun distraction: Trying to bounce coins off of a Nazi's head

History hasn't been kind to strategy games that attempt to translate to first-person shooters. Command & Conquer Renegade was a big disappointment, and Starcraft: Ghost has been delayed indefinitely. In some ways, Commandos: Strike Force is a very enjoyable game. At other times, it seems like the most generic FPS you've ever played.

Depending on the mission, you will play as one of three soldiers: the Green Beret, the sniper and the spy. Many missions will feature just one of these, while others will allow you to switch between them using the black button. It's a good idea in theory, but becomes annoying thanks to an inexplicable oversight: when you switch characters, AI does not take over your previous soldier. Let's say you're in the middle of a fierce firefight as the Green Beret, and you want to switch to the sniper to try to take out some enemies from afar. You hit the black button to assume control of the sniper, but a quick glance at the Green Beret will reveal that he's just standing in the exact same location you left him in. He doesn't fire a gun, take cover or defend himself in any way. 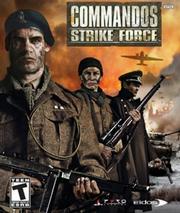 Missions that are designed to be played as the Green Beret are the weakest portions of the game. There is almost nothing in these levels that separate Commandos: Strike Force from just about every other FPS on the market. Objectives are generic and the AI is awful. So awful in fact that you can walk into a room and fire a gun at the ceiling without guards even noticing for several seconds.

The spy missions are where Commandos separates itself from the rest of the FPS crowd. While many titles in the genre implement stealth elements, C:SF manages to make it more fun than you'd expect. You can take uniforms off dead soldiers, and their rank determines how well you're hidden. If you're in disguise, officers of lower ranks won't be suspicious, officers of the same rank will be and officers of higher ranks will spot you immediately. This makes it especially rewarding to kill a member of the Gestapo, because you can essentially run around right in front of the subofficers without them knowing you're the enemy.

On top of disguising yourself, you can perform many other stealthy actions with the spy. Knives are a silent way to take enemies out with one throw, and enemies that you sneak up on can be taken out with some piano wire. If you're extra cautious, you can peek through keyholes before entering rooms. A really fun addition is the infinite amount of coins you can use as distractions. Like empty cartridges in the MGS series, these coins can be thrown to distract guards. If you can't sneak up on a guard because his back is to the wall, just throw a coin in the other direction to turn him around.

While the gameplay can be fun at times, it's a little weak on the technical end of things. Visuals look dated and grainy, and trees and other plants look especially awful (bushes seriously look like an asterix). Cutscenes are glitchy and filled with clipping issues and terrible mouth-to-speech syncing. Your soldiers tend to repeat the same lines over and over again during missions. Get ready to hear the spy say "Be smart, be quiet:.be deadly" about 500 times.

If Eidos intends to continue Commandos as a FPS series, I'd recommend they discard the Green Beret missions and focus on the stealth elements. Commandos: Strike Force is certainly a very flawed game in many aspects, but the entertaining spy missions make it worth checking out.