Bad: :get buried under mediocrity

Includes: Every RPG cliche since 1992

Here's a question: say you have a high population of monsters running around the countryside, how should one deal with this? Do you kill them all? Trick them into boarding a rocket ship and then shoot them to the moon? Or do you lure them into a giant tower and just assume they'll never come out?

Well for the characters in Tao's Adventure: Curse of the Demon Seal that last option sounded the most appealing of any. It works out pretty well for them too, until lightning strikes the tower, breaking the seal and releasing its vile occupants onto the world again.

A traditional RPG in style, Tao's Adventure follows the events surrounding the aftermath of this catastrophe. Monsters attack Tao's village and everyone he holds dear is turned to stone, leaving only him and the village elders alive. Since he's the only adventurer that's not also a member of the AARP it becomes his responsibility to journey to Mondominio, climb the Monster Tower and set things right. What follows is a climb through each of the tower's maze-like floors and one of the most tedious gameplay experiences ever experienced on Nintendo's dual-screen wonder. 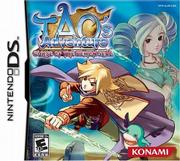 Why is this? Simply put, the game depends on the stylus and touch screen way, way, way too much. In Tao's Adventure the stylus and touch screen are used to move your character, access menus, scroll down lists, look at the map, equip weapons, cycle through dialog choices, use items and cast spells. Worse yet, the only one of these many functions that can be done with the traditional buttons is movement. While its nice to see DS games incorporate the unique elements of the system it's overkill plain and simple.

Tao's adventure has two systems at work during play. The first is your standard free-roaming system that allows you explore the city of Mondominio when you are not in the tower. This system works just fine, allowing you to move about Mondominio with ease. There are a couple of gripes, the camera could stand to be farther away from Tao so we could see more of the environment and being forced to remain stationary when using the map is a pain, but in all this system is fine.

The other system in play occurs during battle inside the tower. Each floor is divided into a grid. It's possible to move freely around these floors until you encounter an enemy. Then it becomes a turn-based system, allowing you to advance a single square on the grid, cast magic, attack, use an item or equip a different weapon, in a single turn. After each battle you gain experience and level up in real-time.

The already slow turn-based combat is made even more monotonous by the game's dependency on the stylus/touch screen. Strategic battles feel more like an attempt to access your datebook on a PDA and the only truly enjoyable function of the touch screen/stylus combination is the Magic System. Here you draw symbols on the screen that represent spells, select your target and then cast your spell. It's a blatant rip-off of the Seal System from Konami's excellent Castlevania: Curse of Darkness, but it worked wonderfully there so it makes sense that it works here just as well. 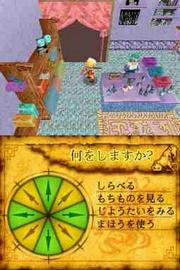 While we're on the subject of taking creative liberties with gameplay elements from other popular series, the game also borrows liberally from Pokemon. While traveling up the Monster Tower Tao will come across monster eggs that he can have appraised, then sell or hatch them. Hatching monster eggs allows you to battle other monsters in the Mondominio Coliseum. These battles are command-based, you have no direct control over the monsters you only decide how they fight and them leave them to it. It's possible to trade your monsters wirelessly with your friends, but you'll be hard-pressed to find a group of people who own this game-unless you've got front row seats to a Stupid Convention.

Aside from the magic system the only other redeeming quality of Tao's Adventure is some of the later spell effects are visually impressive (especially meteor) and many of the Monster Tower's maze-like floors are well designed, lending themselves to multiple pathways and secrets. The game isn't afraid to get difficult, especially towards the last few floors and it definitely commits to a traditional RPG length, clocking in at around 30 hours to beat.

When the Nintendo DS was announced I remember thinking, "games for that will either be incredibly inventive or poorly designed, clumsy garbage." While several games have come out that fall into the former category, Tao's Adventure: Curse of the Demon seal falls squarely into the latter. There may not be a wealth of choices when it comes to traditional RPGs on the DS but that doesn't mean you should have to settle for this.